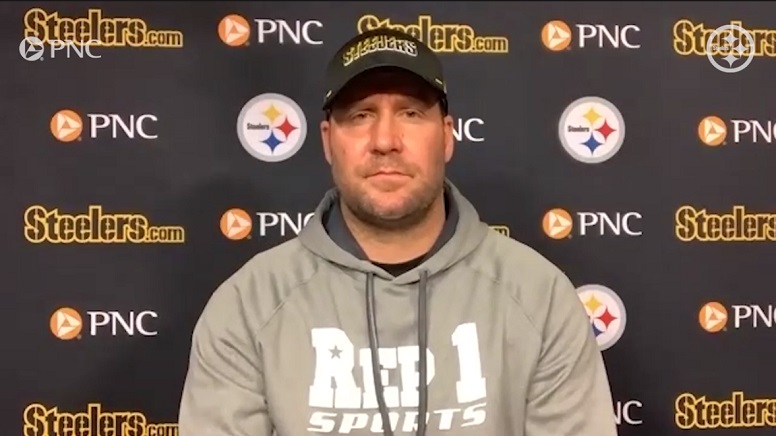 The Pittsburgh Steelers beat the Indianapolis Colts on Sunday in a thrilling come-from-behind win and it now seems like all most people want to talk about is the opposing team’s defense possibly calling out the offensive plays in the contest. Steelers head coach Mike Tomlin addressed questions on Tuesday about the Colts defense calling out the Steelers offensive plays on Sunday and on Wednesday quarterback Ben Roethlisberger was asked to answer questions about the subject.

“No, I do,” Roethlisberger said when asked to what degree has he noticed defenses being able to pick up plays in games in quiet stadiums and if the reports of it happening against the Colts on Sunday are true. “Honestly, there was a lot to be said about the noise level, the quietness of it because you could hear so much.”

Roethlisberger then proceeded to provide an example of that happening on Sunday against the Colts.

“For instance, on Diontae [Johnson]’s touchdown, they [Colts defense] were yelling, “Slant, slant slant!” Their sideline was to my right, right where Diontae was,” Roethlisberger recalled. “They’re yelling, “Slant, slant, slant!” The coverage that they gave us actually, we should have run a slant. I almost changed the play, but I didn’t because they were yelling it. I heard them. Diontae heard them. Their DB heard them. I was like good. We want them to think we are running a slant because we’re running a fade. This could end up working really well.”

Roethlisberger went to talk some about the pros and cons of the quiet stadiums and defenses calling out plays they think the opposing offenses are running pre-snap.

“I think it can hurt and help, if that kind of makes sense,” Roethlisberger said. “There are absolutely times in games where you hear a defender say, ‘Hey, watch this,’ and you’re like, ‘Man, that’s what we called’. Some of that is dumb luck. Some of that is maybe it’s tendencies. We can hear stuff that they talk about. It is one of the most unique years when it comes to strategy, when it comes to trying to trick people. Sometimes you even are trying to do dummy signals and saying dummy things just to make things happen or to trick other teams. There are times in that first half that we are calling things out, but once again, are we getting lucky, or do they know something? It’s hard to tell.”

Even though Roethlisberger and Tomin gave great answers for what took place on Sunday regarding the Colts defense calling out Steelers offensive plays, it will not stop the over-the-top criticism of offensive coordinator Randy Fichtner and people calling for him to be fired before the playoffs start. Roethlisberger has heard that heavy criticism of Fichtner and defended the Steelers offensive coordinator on Wednesday.

“I saw that [Coach Randy Fichtner] was taking a little bit, and he shouldn’t be,” Roethlisberger said. “He calls the play. We have to execute them. In the second half, it’s not just me. He’s telling me stuff in my ear. We’re talking on the sideline. He should get as much if not more, I think more, credit than me or anyone else for that second half performance because he’s the one that’s really kind of given us the insight, the direction and keeping it moving. To me, what I see with Coach Randy’s growth is just understanding where our strengths and weaknesses are, and really, like I said, it boils down to us making plays and not the play calling.”

So, are we done with this topic? Are you kidding me? Fichtner has yet to talk to the media this week and that should happen on Thursday. When he does, you can expect he’ll be asked a few questions about the Colts defense calling out offensive plays this past Sunday. Whatever Fichtner’s answers to those questions are, they will not be good enough. In fact, even if the Steelers go on to win the super Bowl this season, Fichtner will not receive any credit whatsoever. The narrative at that point will be that Roethlisberger managed to out-offensive-coordinate his offensive coordinator.

We’ll revisit this topic again on Thursday, so be on the lookout for that post.