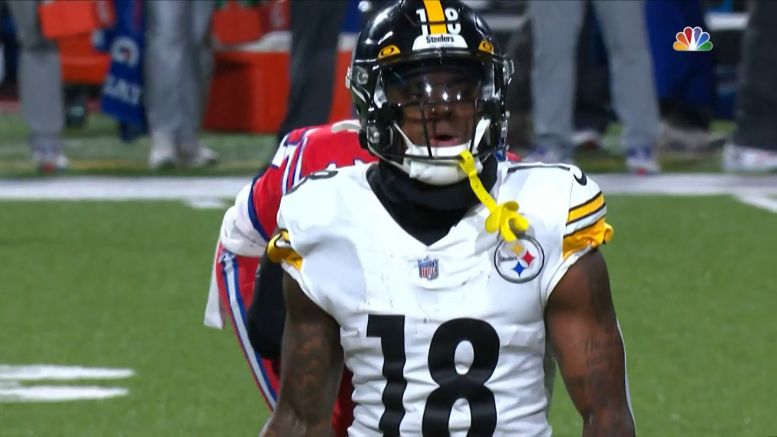 As a coach, you never want to bench a player. If at all possible, it’s something that you want to avoid, and if it does happen, you want to make sure that it’s the best move for the player and for the team as a whole.

These situations don’t necessarily come up all that often—the most high-profile benching recently was for former first-round cornerback Artie Burns, one of the team’s rare misses that high in the draft—but when they do, it’s significant.

The fact that Diontae Johnson’s benching came amid high-profile struggles only put it under the microscope with even greater intensity. The second-year wide receiver had already dropped five or six passes in the previous two weeks. He knew he was facing scrutiny. And then he dropped a pass on each of the first two drives. Head coach Mike Tomlin decided to sit him for the remainder of the first half.

“He wants to win, and he wants to do things right. He was very professional about it”, offensive coordinator Randy Fichtner said of Johnson and the move on Thursday, via transcript provided by the team’s media department. “I knew that at any one given time, we probably could have walked over after a series and said, ‘hey man, let’s get back in there, let’s go’. I patted him on the ass before he went in. Probably shouldn’t say it like that, but on the way in, I said. ‘hey man, we are going to be okay. Get yourself ready because you are going to start the second half and let’s go’”.

Despite missing the bulk of three games this season, Johnson leads the team in receiving yardage at 694. His 69 receptions are second behind JuJu Smith-Schuster, and he is tied for third in receiving touchdowns with five. He is a great route runner and can make people miss. But he also has a couple of fumbles and double-digit drops.

“He is more than capable. He is an awesome guy with the football in his hand”, Fichtner said. “I just think from whether concentration, or whether it’s maybe young guys not practicing leads to some of this. I don’t know. But I know one thing, he had a hell of a practice yesterday, and I couldn’t have been more proud of him. I think as we move forward, I think you will see a real consistent Diontae”.

Johnson did play nearly every snap of the second half of Sunday’s game, though he was only targeted three times, all on the same drive. He came up with the catch all three times, coming on their lone scoring drive of the half.

It’s encouraging to hear that he had a great week of practice, but it needs to translate to the field. He already has an NFL resume, showing that he is capable of playing at this level. it’s only a matter of reducing his mistakes and cleaning up his game. He certainly is talented enough.