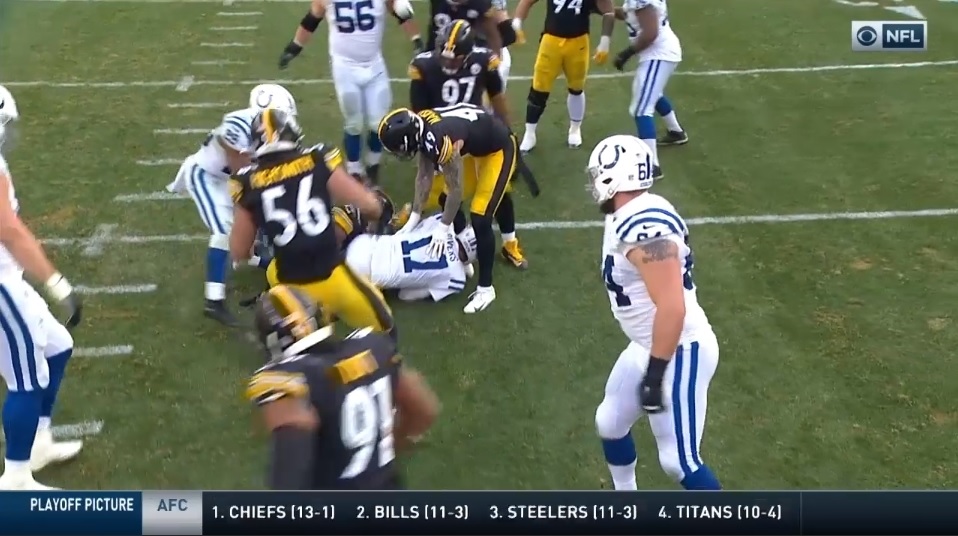 I am not overly superstitious. But as an average Steelers fan, I do take precautions. Last week, I trimmed my beard and cut my hair for first time since September. That did not work. This week, I switched my gameday jersey to a brand-new Kevin Greene throwback jersey that my son and girlfriend presented to me on Christmas Day.

Awesome gift from number 3 son and his girlfriend. Note the number on this Throwback jersey from the 1994 season #HereWeGo @Steelersdepot @Alex_Kozora pic.twitter.com/JT4VIlwrRk

I expect other Steelers fans made a change to their routine to help end a three-game losing streak.

Steelers offense start game with another three and out. Already down 7-0, their second drive is little better as Benny Snell loses two yards on third and one at midfield. Steelers helped by a 43-yard Jordan Berry punt and holding call that pins Colts to five-yard line. Mike Hilton defends a pass intended for T.Y. Hilton and the Colts punt. Steelers have ball at their own 41 but offense goes three and out.

Jordan Berry punts the ball to the six-yard line but Nyheim Hines returns the punt 26-yard yards. It’s never good when the long snapper in on a special team’s tackle. But on the very first play, T.J. Watt strips the ball from Phillip Rivers and Mike Hilton grabs the ball and returns it 14 yards to the three-yard line.

The way the offense played thus far thought Hilton needed to score for Steelers to get a touchdown. Following a defensive offside penalty, James Conner gets into the endzone on his second effort. The offensive line did not get much push and Conner initially stopped short of the line, but he lunged forward to tie the game.

COLTS IN OVERDRIVE WHILE TOMLIN FORGETS HE CAN CALL TIMEOUT

After the Steelers score, the Colts responded by slicing right through the defense to finish an 85-yard drive with a 14-7 lead. The Steelers go three and out. Berry punts 50 yards but Hines returns it 25 yards. Officials add 10 more flagging Justin Layne for an illegal block. On the second play, Steelers blitz but Rivers connects with Zach Pascal for a 42-yard touchdown pass. Colts in overdrive and lead 21-7.

The Steelers and Colts exchange punts. However, lousy clock management costs the Steelers an opportunity to score at end of the first half. On second and 15, the Colts called for delay of game stopping the clock at 1:10 and it is now second and 20. Hines runs the ball for two yards making it third and 18. Yet Mike Tomlin holds onto his three timeouts. Hines runs again for four yards and finally the Steelers use their first timeout with 22 seconds left. Colts punt and Steelers left with two timeouts and 14 seconds to go. Ben completes a long pass to JuJu and call timeout but just two seconds remain. Steelers out of Wright’s range so pass to JuJu again who I think attempted to lateral the ball to Diontae Johnson but half ends. The Steelers don’t score and go inside the locker room with one unexpended timeout.

The “best” comment from the Steelers Depot first half live update and discussion thread summed up many fans feelings to this point in the game: “This is the worst team in the league right now and it’s not even close. I’m not even kidding. The Jaguars and Jets would steamroll us at the moment.”

Matthew Wright failed to kick a touchback during the game. Cassius Marsh tackled the returner at the 25 preventing a larger return. But the Colts marched to the seven-yard line effortlessly. Stephon Tuitt sacked Rivers on third and three leading to a field goal. The Colts reached their biggest lead on the opening kickoff. It’s 24-7.

The Steelers responded with a long drive. Ben completed five passes including a 34 yarder to Chase Claypool. At the four-yard line, Ben targets James Washington. But officials catch Xavier Rhodes interfering and throw the flag. Steelers first and goal at the one. Snell loses a yard. The Colts control the line of scrimmage on both sides of the ball for most of the game. Ben throws three straight incompletions. The last intended for Washington batted away in an exceptionally good defensive play. The score remains 24-7.

4th down PBU on pass to Washington from Ben #Steelers pic.twitter.com/072pjlXcAo

The Steelers defense asserted themselves. The Colts tried to gain maneuvering room on first down from the two. Instead, Avery Williamson drops Jonathan Taylor for a one-yard loss. A strong pass rush forces Rivers to throw short toward T.Y. Hilton. On third down he completes a short pass to Zach Pascal for six yards. Colts punt for just 40 yards and Ray-Ray McCloud returns it eight to the 39-yard line.

On first down, Ben Roethlisberger heaves the ball deep to Diontae Johnson who collects the ball and scores. Suddenly, the game is more interesting. The score is now 24-14.

The defense continued to shut down the Colts who had been unstoppable in the first half. Williamson sacks Rivers. The Steelers will end up with five after Colts only gave up 14 all season. The Colts can’t make up the ground lost on the sack and end up punting. The Steelers get the ball at their own 26 following an eight-yard return by Diontae Johnson whose foot cramps up after the play. Danny Smith put both Ray-Ray and Diontae back deep a new wrinkle.

Officials call Kenny Moore for pass interference giving the Steelers 24 penalty yards. The Steelers get consecutive first downs on receptions by James Washington and James Conner. Another pass interference penalty adds 21 yards to the five. Ben then passes to Eric Ebron who dives over the goal line. Must be satisfying to score against your old teammates. It’s now 24-21.

The Colts start a drive but on third down at midfield, Cam Heyward sacks Rivers to shut it down.

The Steelers get the ball with 12:06 remaining down by three. I ask for a 12-minute drive capped by a touchdown. Instead, the Steelers score a touchdown but only use up 4:28. Key plays included Conner’s 12-yard run. Conner catching a ball for ten yards to make a second and 15 easier to convert. Then Conner running nine yards for the first down. Ben connects with JuJu-Smith-Schuster for the go-ahead score with 7:38 to play.

WE HAD ‘EM ALL THE WAY

Now can the Steelers hold? Mike Hilton intercepts a deep Rivers pass to give the ball back to the offense at the nine. Mike Pittman very alert to tackle Hilton otherwise he may have returned it for a lot of yardage. Ben passes to JuJu four straight times for 21 yards and two first downs. On third and two Ben connects with Diontae who is knocked out of bounds a yard short and stops the clock. The Steelers punt with 2:25 left but Colts have used all three timeouts.

The Colts manage to get off four plays before the two-minute warning. On fourth down, Steve Nelson intercepts the ball. However, officials call him for defensive pass interference. To me it is a ticky tack call. They disengaged well before the pass arrived. Nevertheless, the Colts have new life. Minkah Fitzpatrick almost intercepts a ball that would end the game. Then Rivers connects with T.Y. Hilton for 21 yards. They are at the 35 with 1:33 to go. One short completion. Then Rivers fails to connect with T.Y. Hilton twice. A final incompletion targeting Pascal and the Steelers finish the game in the victory formation.

The Steelers Depot live update and discussion thread revised its overall opinion by games end. The “best” comment of the second half endorsed by many: “to all the so called “haters” (including myself) who wrote this team and Ben off at halftime: we are absolved of our sins. There is no rational explanation for this degree of manic performance.”

When I was a young Pirates fan back in the sixties and early seventies. Legendary announcer Bob Prince would deadpan with his gravelly voice after an improbable come from behind victory: “We had ‘em all the way.” Indeed, we did.

The Steelers finished strong and surprised the Colts in the second half. Yet concerns remain. The first half was a recycled mess from the previous several games when the Steelers underperformed. The offense couldn’t score. The defense couldn’t hold them. The coaching staff made dumb decisions like ineffectively using their timeouts at the end of the half.

The second half started bad. Colts score on opening drive and Steelers turnover the ball on downs at the goal line. Then something clicked. The defense shut down the Colts and the offense scored touchdowns on three straight drives.

Mike Hilton had a huge game. Recovering a fumble leading to the Steelers first score and then intercepting a pass late in the game. Ben Roethlisberger connected on a deep touchdown pass to Diontae Johnson. Diontae dropped his first pass early in the game but came up big as the game wore on. T.J. Watt stripped the ball leading to the first takeaway and added another sack. A warrior who played on even as an offensive lineman had him in a stranglehold.

We will see how Mike Tomlin handles the final regular season game against the Cleveland Browns. The team must place all effort on preparing for the playoffs. This edition of the Steelers still has a lot to prove to themselves and their fans. Here we go!

I always like to include a music selection. The Steelers jolt the Colts but there is still work to be done. Here is Electric Avenue by Eddy Grant