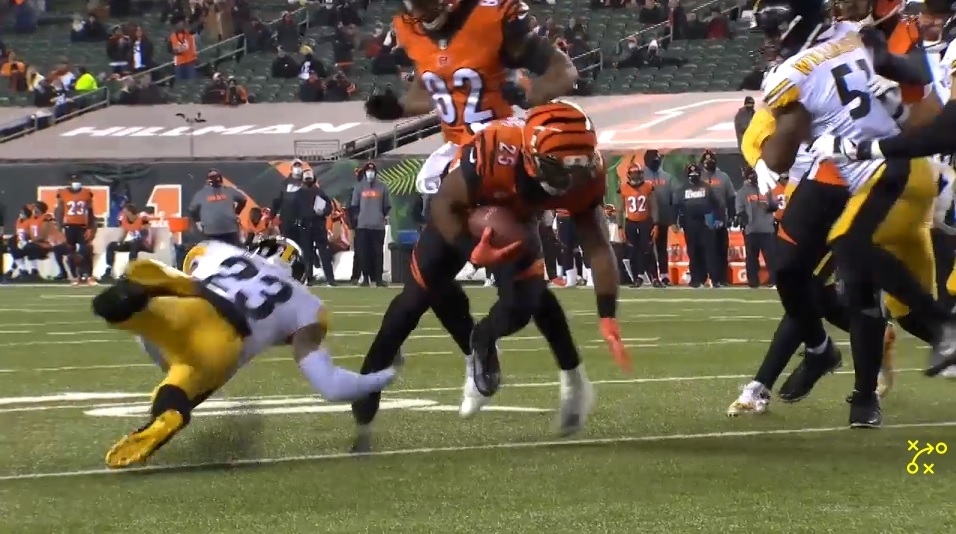 Two days removed from the debacle that was Monday Night Football, I still and struggling to come up with words to describe what we saw from the Pittsburgh Steelers against a down and out Cincinnati Bengals team.

While I won’t try and describe the game as a whole here, I can describe the tackling performance. For the second straight week it was bad as the Steelers recorded another 12 missed tackles Monday night at Paul Brown Stadium in the Queen City.

As you can see, it wasn’t a good night for the Steelers’ defense in the tackling department for the second straight week.

Last week in Buffalo, Pittsburgh struggled to tackle in space, and that carried over to Week 15 in Cincinnati.

Again, it was mainly the secondary players for the second straight week. The real issue though is that the lack of depth at inside linebacker is really starting to rear it’s ugly head. Marcus Allen is trying his best, but he’s missing a bunch of tackles and just isn’t quite making the proper impact against the run.

Let’s take a look at some misses.

Late in the first quarter Keith Butler drew up a cornerback blitz for Mike Hilton in hopes of creating a splash play.

Credit to Hilton for closing that much ground in a hurry, but he has to finish this play. It’s a sack that he misses out on, which fortunately doesn’t kill the Steelers because Cam Heyward is there to clean up Ryan Finley at the line of scrimmage.

I’m all for being aggressive, but you have to be able to trust these guys to make the plays when they get there. Hilton hasn’t been able to consistently do it in recent weeks.

For all the great things Joe Haden has done this year for the Steelers’ defense, he still comes up short too much for me on the edge against the run.

Monday’s first touchdown of the game was all on Haden. He has to be more aggressive and fill here and really stick his face into the fan. Instead, he goes for an arm tackle and whiffs badly on Gio Bernard, allowing the veteran Bengals back to walk into the end zone for a 10-0 Bengals’ lead.

Maybe Haden is still nursing an injury or something, but that was a bit soft from him.

You want to talk about a comedy of errors from Monday night? Look no further than Bernard’s 14-yard touchdown catch.

Three Steelers — THREE — were in the vicinity of Bernard when he caught this throw over the middle from Finley on a Texas route. That should have gone down as a 5-6 yard gain because Marcus Allen, Avery Williamson, and Cam Sutton are all right there.

Allen goes for a diving tackle attempt and comes up short; Sutton goes for a big hit with his shoulder and whiffs, and Williamson gets caught up in the trash.

Pause that video when Bernard is in between all three. There’s no way he should have gotten out of that. Instead, well, we know what happened.

For all the offense’s warts Monday night, I thought Benny Snell Jr. was really, really good in the run game and flashed some as a checkdown back out of the backfield.

This was his second-best run of the night and he dished out some serious punishment, introduction some Bengals to Benny Snell Football. Here’s hoping he gets more run down the stretch.