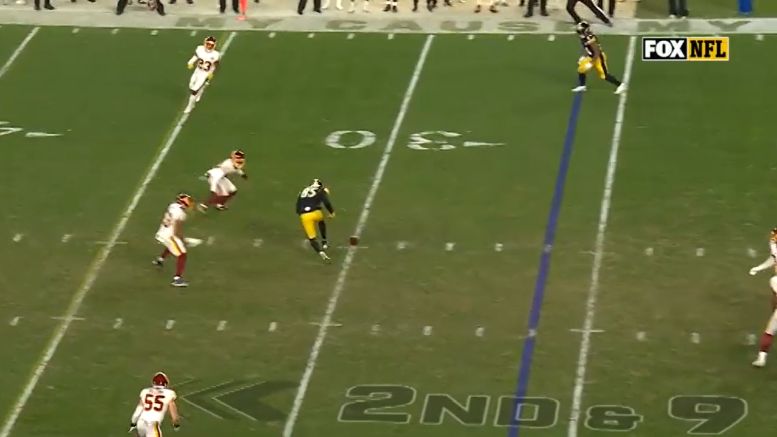 Blocking. Tackling. Running. Catching. Some of the most fundamental elements of the game of football. If you don’t do those four things well enough, then you’re going to have an extremely hard time winning many games in a league that does those things better. These are the routine tasks that serve as the minimum requirement for success in the NFL—or at any level.

For the Pittsburgh Steelers, they usually do most of these things well enough. The run game needs work in blocking, but their bread and butter is in pass protection, and they haven’t allowed a sack in five straight games, which is certainly remarkable.

Running? They have plenty of wide receivers who love to run around and are good with yards after the catch. Tackling? Sure, there are some missed tackles. They also have more tackles for loss than anybody in the league. Now catching? That’s increasingly become a problem.

In fact, over the last two games, they have taken the league lead, by multiple sources’ reckoning (including PFF and ESPN), for the most drops in the NFL. Diontae Johnson and Eric Ebron have been the biggest culprits, and head coach Mike Tomlin knows this has played a role in their loss.

“We just got to make routine plays routinely. I say that often, but there’s a lot of truth to it. Got to make

routine plays routinely”, he said after the game. “We’re not making them routinely enough right now, so it’s affecting our fluidity as a collective group”.

When asked about the drops that the Steelers had that night—both Johnson and Ebron had drops on consecutive drives to open the second half—Tomlin said, “a lot of them could be characterized as routine”. And it’s true.

A lot of the balls that Steelers skill position players have put on the ground in recent weeks absolutely fall under the routine category. All they had to do was field the ball and then turn upfield. Accurate balls clanking off of hands and chests for incompletions instead of yards after the catch.

Even though it’s a short week, I’m having a hard time imagining that Tomlin will not install some sort of consequences for drops. At a minimum, I would imagine that there will be extra time spent on the Jugs machine this week.

It’s pretty uncharacteristic for a Steelers team to be anywhere near the top of the NFL in terms of dropped passes. They have had some of the more sure-handed players at their positions in the NFL over the past decade and a half such as Hines Ward, Heath Miller, Le’Veon Bell, and Antonio Brown, but their current group has been anything but reliable in this department. The issue needs to be addressed before it snowballs.