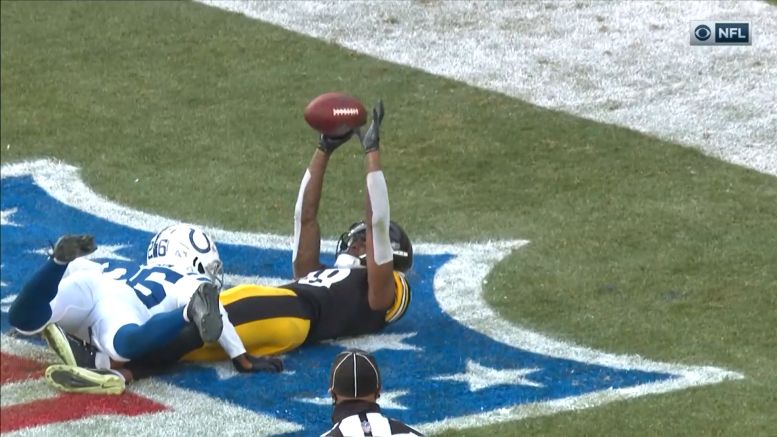 There really isn’t a player or coach as part of the Pittsburgh Steelers who is above criticism for their performance over the course of the past several weeks. By and large, the team as a collective has been below the line, with even the defense failing to hold up their end of things, especially when it comes to protecting the end zone.

One of the lightning rods for criticism over this recent stretch has been second-year wide receiver Diontae Johnson, who has dropped more passes than anybody else in the NFL this season, with a dozen or more on the year depending upon which source you want to cite.

It got to the point that he got himself benched for an extend point of time a couple of games ago, but he has responded well to that demotion, catching eight passes and getting into the end zone in each of the past two games.

On Sunday against the Indianapolis Colts, he played a big role in sparking a 17-point comeback, hauling in a 39-yard touchdown pass from Ben Roethlisberger in the middle of the second half when they were three scores behind.

It was all part of an eight-catch, 75-yard day, which doesn’t even including a couple of significant defensive pass interference penalties that he was able to draw that puts him over 100 yards accounted for for the day.

“We’ve all had our struggles of late. None of us are removed from that”, head coach Mike Tomlin said of his young receiver after Sunday’s game about his issue in recent weeks and coming back from it to make plays. “This is a fighter’s business. This is a competitor’s business. And I expect all to compete and smile in the face of adversity, and he did”.

With one game left to play, Johnson has 85 receptions 826 yards and seven touchdowns, which, all things considered, really is a commendable season for him. He missed one game due to injury and effectively missed two others as well, so his production pretty much comes from just 12 games.

The storyline on Johnson during the early stages of his career is that he is a frustrating talent, and that’s a description that’s hard to dispute. He has a tone of talent and has the capability of making some really impressive plays, but he also makes a lot of mistakes that can be costly.

Which Johnson is going to show up for the Steelers for their postseason run? There is no margin for error in the single-elimination tournament, so they had better hope that he will be at his best on the biggest stage.