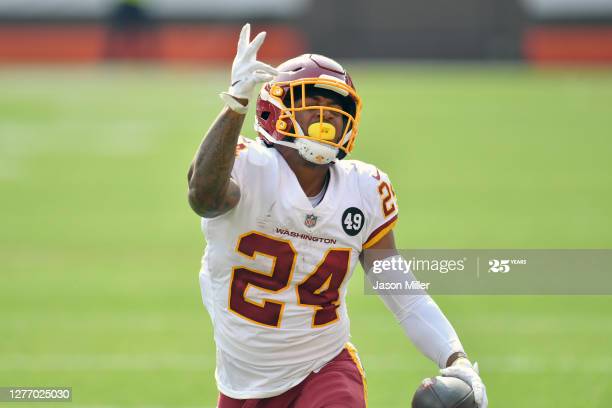 After a sloppy win against their hated AFC North rivals that left a bad taste in the mouths of coaches, players, and fans alike, the Pittsburgh Steelers have another odd week before a game. The Baltimore Ravens game being delayed until Wednesday of this week leaves the Steelers on a short week before playing the Washington Football team hot off a decisive, blowout win against the Dallas Cowboys on their own Thanksgiving game.

They’re being led by an underrated defense and a motivational story at quarterback with Alex Smith recently returning as the team’s starter after recovering from an on-field injury that narrowly escaped a leg amputation.

As families gathered to carve up the Thanksgiving turkey and watch Washington cook up the Dallas Cowboys, 41-16, it would have been impossible to miss the brightest star in the game, rookie running back Antonio Gibson.

The third-round pick, Gibson, took over as the starting running back after Washington cut future Hall of Famer, Adrian Peterson, in September. Coming out of the University of Memphis, Gibson mostly lined up at wide receiver for the Tigers, running the ball just 33 times in his career. That didn’t stop Washington head coach, Ron Rivera, from comparing him to the swiss-army knife, Christian McCaffrey, who he knew well during his time as the Carolina Panthers head coach.

Gibson has done well to meet his coach’s lofty expectations. Through 12 weeks of the season, Gibson sits third in the NFL with 11 total rushing touchdowns only two short of Washington’s franchise record for rookies set by Alfred Morris when he and the quarterback the Steelers last faced, Robert Griffin III, took the NFL by storm in 2012.

Gibson has scored six of his 11 touchdowns in the last three weeks and has scored at least once in each of the last five games. With Pittsburgh’s defense having a few shaky games down the stretch against the run, Gibson and his dynamic speed certainly present a possible mismatch on Monday.  Let’s take a dive into how he’s reaped his success the past few games for Washington.

Antonio Gibson Running Out of Shotgun

While the two biggest rushing games of Gibson’s career so far have both come against the Dallas Cowboys defense, it’s not something you can completely write off as that same defense was able to hold the Steelers’ running backs to a whopping 30 yards on 15 carries (2.0 yards per carry). While it’s maybe a poor benchmark comparing against a Pittsburgh team that has really struggled in the run game, what I’m trying to portray is that a team has to be good to run on anyone in the NFL, no matter the team they’re up against.

Diving into the tape, you can see Washington loves using Gibson in shotgun with zone and sweep plays. These are perfectly suited to Gibson’s strengths being able to use his quickness and vision as a natural playmaker. Watch him as he takes the handoff and takes advantage of the massive cutback lane left by the Cowboys, then he’s slippery in the open field.

The motion here does just enough to hold the EDGE defender for Gibson to use his burst to get upfield. I suggest you get used to seeing running back, J.D. McKissic, in motion because he’s used a ton pre-snap in this offense in terms of motions.

Gibson’s jump cuts in the hole are extremely impressive. Watch him here as it seems the Cincinnati Bengals’ defensive lineman has Gibson dead to rights until he explosively jump cuts upfield making the defender look foolish as he takes out one of his own teammates in pursuit.

In case that example of a jump cut wasn’t good enough, here’s another one. This time from a split zone play. The split zone is a variation of the zone run blocking scheme. In this zone-blocking scheme, players typically try to cut block the backside defensive end or edge defenders to prevent pursuit. Here they do their job. Gibson again uses his vision and jump cut ability to get up into the hole and burst through for a 15+ yard gain.

With his quickness and cuts taking most of the show here, I’d be remiss to not mention his home run hitting speed. Gibson’s 4.39 speed, he showed off at the NFL Combine in the spring, is what helped him jump up a lot of teams’ draft boards. You can on his 37-yard touchdown run against Dallas, his speed completely ruins the safety’s angle on the way to the end zone.

The type of back Gibson is creates some obvious concerns due to his speed and burst against a Steelers defense that recently has lost a sideline to sideline linebacker in Devin Bush and more recently losing a freak athlete at outside linebacker in Bud Dupree. The run defense has already struggled against a similar style running back, Tony Pollard, in the Dallas Cowboys game.

Pollard averaged over six yards on his nine carries in that game. When you watch his most successful runs, they’re almost identical to the runs that you see from Gibson in Washington’s offense. The two clips below are perfect examples of what I mean. Both are shotgun runs either a form of sweep or zone plays and Pollard is able to use his vision and speed to make the most of what is there.

The last thing to cover on Gibson is his receiving ability out of the backfield. Due to his receiver background in college, this is sort of an obvious thing, but I think it’s important to point out. Especially now that Alex Smith, who is notorious for being a “Check-down Charlie”, is under center, he knows how to distribute the ball and take what the defense gives him.

Against the Cowboys last week, Gibson was targeted seven times and caught five of the targets for 21 yards. While the yardage isn’t anything to write home about, anytime Gibson is able to get the ball in his hands in the open field, he’s a big-play threat.

Below is a great example, as it’s a play that should have resulted in no gain, but Gibson is able to turn it into six yards. He uses his wiggle to make the first guy miss and then runs down the sidelines.

These are the types of plays that can help an offense thrive, especially in third-and-short situations. If you can remember back to the days of Le’Veon Bell with the Steelers, these are the types of plays that he’d feast on. If nothing was there in the passing game, Ben Roethlisberger would dump it down to him and he’d pick up six or seven yards. It can be so deflating to a defense.

While there are certainly other weapons on this offense including superstar receiver, Terry McClaurin, if the Steelers are able to take Gibson out of this game I think the Washington offense really sputters. If they can mute Gibson, it allows the offense to put up another below-average scoring performance against a stout Washington defense and pick up win number 12.