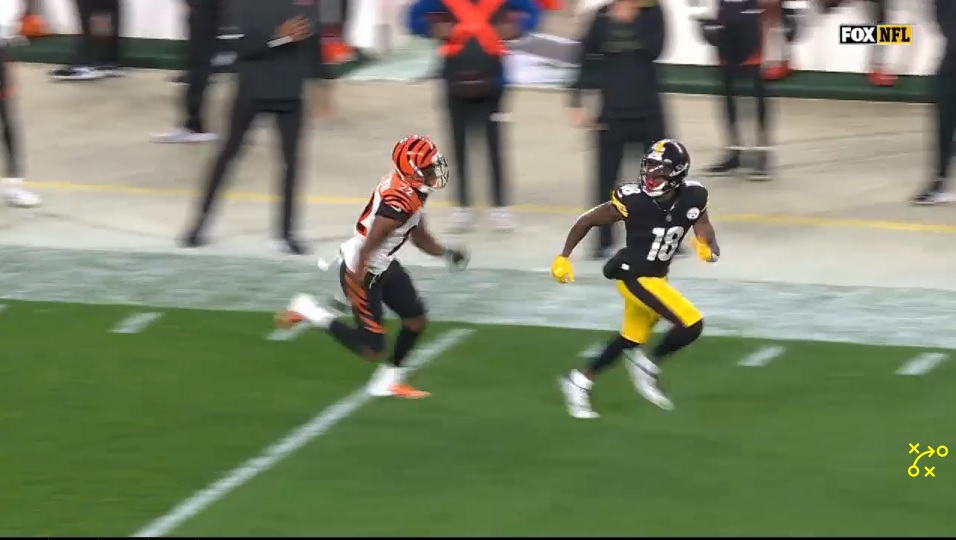 The past few weeks, especially during the Steelers’ two-game losing streak, their offense is giving fans PTSD flashbacks of the 2019 offense ran by Mason Rudolph and Duck Hodges. In some aspects, that’s because they are mirroring that same horrid offense that helped this team fight and claw for an 8-8 record last season.

Definitely not what anyone thought would happen coming into this season.

No, Daniel, this is definitely not what one expected this year, but the Steelers have still found ways to win regardless. Now 11-2 and sitting behind only the Kansas City Chiefs in the AFC standings, Pittsburgh has to travel to the home of their AFC North rival, the Cincinnati Bengals, in hopes of putting this offense’s pieces together.

From here on out, until this team’s offense finds a solution to their discombobulations, it’s going to be involved in the matchup of the week. This defense is not the reason the Steelers will lose games. Last week against the Bills, instead of expecting for the offense to finally shift into gear, I found myself simply hoping for the defense to pull the rabbit out of the hat with a pick 6, or some equivalent, that helped swing the game. Sound like last year?

If the Steelers want to “dink and dunk” down the field that’s a fine strategy, but that can’t be the only tool in your belt. When you have no threat of a deep passing game or even the thought of a running game, teams can and will shut down your short passing game as we’ve seen the past few weeks. The excuses are gone now, as they finally were able to have an extended rest thanks to a Monday Night Football game.

With a full week of practice under their belt, they have time to button down and get this deep passing game figured out. The last time the Steelers played the Bengals was one of their most successful games in recent memory of throwing it deep, although even that is not saying much.

While the underneath throws are clearly the focus of this Steelers offense, only three quarterbacks have attempted more passes of 20 or more yards downfield than Ben Roethlisberger in 2020. On throws 20+ yards downfield, Roethlisberger is 19 for 64 for 587 yards, eight touchdowns, and five interceptions according to Pro Football Focus. Now we know that Steelers receivers certainly haven’t helped in this area either as their drop issues are a major problem with this offense right now. Something has to give if Pittsburgh plans to be dangerous in January.

During the Steelers offensive coordinator, Randy Fichtner’s, Thursday Zoom conference, he pledged multiple times that they will be working on stretching the field this week and blamed the lack of practice reps over the last three weeks for why it hasn’t been working.

“Today [Thursday] we are going to throw deep balls,” Fichtner said. “We will do it in individual and there won’t be a defender on them. We won’t tangle anyone’s legs up and be falling down 30 yards down the field, but it does give you that sense of timing and rhythm again and potentially just seeing the throw and catch and the adjustment by a receiver. We know we’ve got to get back to that.”

This matchup with the Bengals couldn’t have come at a better time as the Steelers offense will face a Bengals defense on Monday night that’s allowed 34 of 84 (40.5%) deep pass attempts to be completed against them for 957 yards and five touchdowns. This by no means guarantees any sort of success for the deep ball in this game. In the Week 10 matchup with Cincinnati, Roethlisberger completed just three of his nine total deep pass attempts for 94 yards.

Let’s take a look at a few Week 10 clips that were successful against this Bengals secondary that is no stranger to allowing big plays.

This double move by Diontae Johnson is not only one of his prettiest plays of the season, but also one of Ben Roethlisberger’s best deep throws of 2020. We know Johnson has no problem with getting open, it’s the catching part that is his issue right now. In terms of creating separation, he should continue to feast as there’s no one on this Bengals team that can match him. It’s up to him if he can bring the balls in.

One area the Steelers really tried to attack against Cincy, that they’ve ignored for the most part this year, is the deep middle of the field. Here you have the tight end, Eric Ebron, working a wide release post and Roethlisberger is able to squeeze the ball into the window before Ebron takes a big hit.

Let’s look at another post route, this time by Chase Claypool. You can see he presses toward the cornerback’s outside shoulder almost like he’s about to run a speed out. Then, as soon as the cornerback turns outside, Claypool plants and explodes inside. The corner has no choice but to grab Claypool to prevent the touchdown and draw the pass interference.

If this route by Claypool looks familiar to you, it’s probably because it’s identical to the one Roethlisberger completed to James Washington for a touchdown last Sunday in Buffalo.

There’s no shortage of blame to go around when it comes to this deep passing game ultimately not being effective. There was no exception in Week 10.

Here, Claypool is running an inside stem corner. The first problem is him having zero distinction on any of his cuts, therefore creating no separation. Roethlisberger still trusts in Claypool however and throws it up to him anyway.  Ultimately, the ball is behind the receiver but still is in a spot that makes it catchable. Claypool appears to have trouble tracking it and ends up stumbling before letting the ball bounce off his hands.

Claypool has had a heck of a rookie season, but the last few weeks it seems he’s not making any of these plays on deep balls, many bouncing off his hands. All are tough catches don’t get me wrong, but they are plays he can make. He just hasn’t been making them.

The other issue with the deep passing game is ball placement. Now, there has been a lot of speculation about Roethlisberger’s arm being shot, but he continues to state that it feels great, he just has to be better. We’ve seen a ton of balls landing out of bounce on deep sideline shots, some ducks way underthrown, as well just straight misses.

Below, is a great route by Diontae Johnson on a skinny post. He comes off the line and easily beats the press with an inside speed release. The window is there between the cornerback and the 1-high safety, Roethlisberger just simply misses the throw high.

This is another example that one can point to and say that it’s a tough throw. And they’d be correct. However, this is the big boys, the NFL, there comes a point in time where SOME of these plays need to be made to have success. When it comes to the Steelers’ deep passing game, the plays are too few and far between.

There’s no saying that this game against the Bengals will be a cakewalk as there’s no such thing in the NFL. To put it bluntly, the Steelers should win. It also should be used as a “tune-up” of their deep passing game. If they can put some explosive plays together and gain some confidence from Roethlisberger, receivers, and Fichtner alike, teams will have to start to respect the deep ball. This naturally will begin to open things up underneath again for this offense. We’ll see just how much that rest and extra practice helps this deep passing game come Monday.