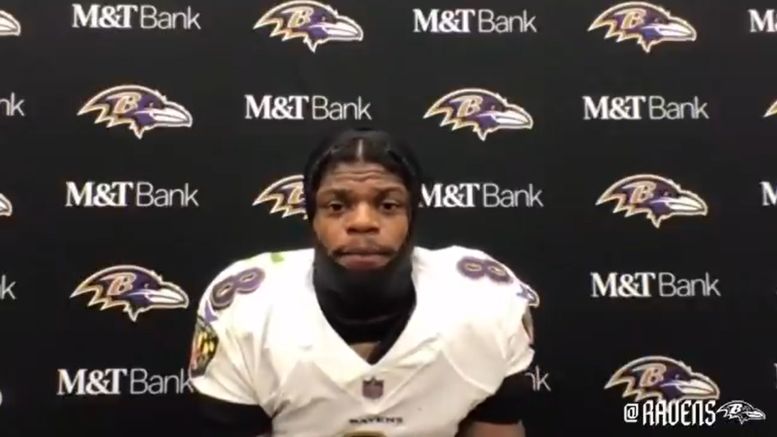 Lamar Jackson did alright for himself last night as a quarterback, completing 11 of just 17 pass attempts for 163 yards and one touchdown, a 44-yard dagger to Marquise Brown on 4th and 5 in the late stages of the game that, at the time, gave the Baltimore Ravens a 42-35 lead over the Cleveland Browns.

Where he really shone was as a running back. He picked up 124 yards with his legs on nine carries, and that included two rushing touchdowns, both of them in the first half. His mobility, both on designed runs as well as on scrambles, and in his ability to extend plays in the passing game, was critical to Baltimore’s success.

It almost was, however, that he would be sidelined for a late-game loss after the defense blew that lead quickly to Baker Mayfield and company. Jackson had to leave the field and headed into the locker room, the broadcast citing cramps.

With Robert Griffin III still sidelined with the hamstring injury that he suffered against the Pittsburgh Steelers a couple of weeks ago, the only other quarterback available was Trace McSorley, and let’s say he didn’t do so well. He completed one of four passes for 13 yards and gained one yard on two rushes.

On his second rush, he suffered an injury and would have to leave the game. By then, Jackson had already returned to the sideline following his backup’s being blown up for a loss of three. That set up the 4th and 5 on which Jackson scrambled to buy time and found Brown for the comeback and go-ahead score.

But why did he really go to the locker room? It instantly became a joke on social media, that he actually had to use the restroom. His teammate, Griffin, even posted a meme about it after the game, while Jackson was at the podium.

Of course, he was asked about why he went to the locker room, and he had a sense of humor about it as well. Referencing a famous incident in the NBA in which a player had to leave the game due to a stomach-related issue, he said, “I didn’t pull a Paul Pierce. I was cramping”.

Jackson was even up late at night enjoying the memes. At about three in the morning, he retweeted one in which a little boy is peeking under a bathroom stall, with the attached text reading, “John Harbaugh coming back to get Lamar Jackson off the toilet”.

It’s certainly good for a laugh, but ultimately, Jackson’s ability to return to the field was good for the Steelers, as it handed the Browns an important loss that makes Pittsburgh’s path toward securing the AFC North title that much easier and simpler.