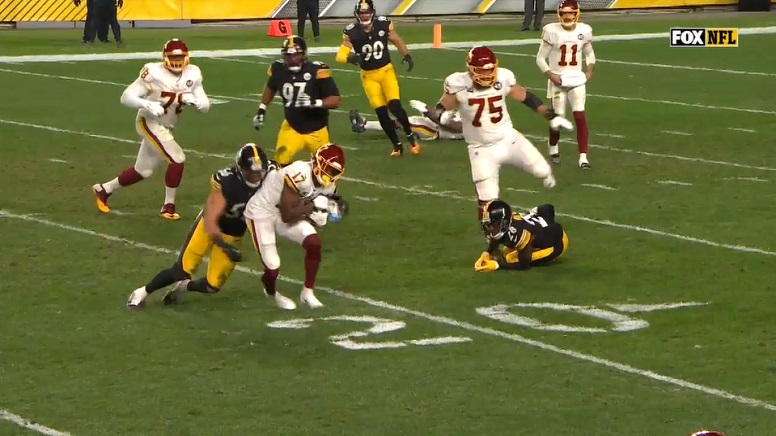 Pittsburg Steelers rookie outside linebacker Alex Highsmith made his first career start Monday night against the Washington Football Team and while he failed to record a sack in that contest, the all-22 tape from it shows that he represented himself well overall. On Thursday, Steelers defensive coordinator Keith Butler met the media and right out of the chute he was asked to comment on Highsmith’s play in Monday night’s home loss.

“I thought he was good,” Butler said. “I’ve never worried about Alex [Highsmith] because, like I said last week, you tell him one time and he’s got it. You don’t have to worry about him making mental mistakes or missed tackles. Maybe more so just being an outside linebacker in this league makes it tougher in terms of taking on people and trying to lead tackles and stuff like that. He did a good job for us. There were a couple of things he could improve on.”

Against Washington, Highsmith was credited with five total tackles with two of those being of the solo variety. In total, Pro Football Focus credited Highsmith with two stops Monday night and four total pressures. His PFF game grade was 76.2, the fourth highest on the team of defensive players that played more than 50 percent of the total defensive snaps in the contest. You can see some of the good and bad from Highsmith on Monday night in the tweets below.

Highsmith is now preparing to make his second start in place of an injured Bud Dupree on Sunday night against the Buffalo Bills. He’ll faceoff against Bills left tackle Dion Dawkins extensively in that contest and it should be a great test for the rookie third-round selection out of Charlotte. Dawkins, however, has allowed five sacks on the season and three in the Bills last four games.

The remainder of the 2020 season will be quite a growing session for Highsmith. After all, barring what happened to Dupree and his knee injury a few weeks ago, Highsmith would have continued to been brought along slowly by logging roughly 13 defensive snaps a game and playing extensively on special teams. With Dupree now out for the season, however, Highsmith’s special teams snaps will dip and he’ll play quadruple the amount of defensive snaps he was playing in the first 11 games. Butler expects he’ll make good strides moving forward now that he’s the starter.

“He’s going to be better or get better the more and more he plays,” Butler said on Thursday. “I’m glad we have him. I thought he did a good job for us last week.”

Nice hustle by Alex Highsmith. Defeats the cut block, retraces his steps, makes the tackle for just a two yard gain on this screen. Forces 3rd and long. #Steelers pic.twitter.com/kjjVNfMehy

Heck of a chip by Logan Thomas. Welcome to your first start, Alex Highsmith. #Steelers pic.twitter.com/Cv2TuE323e

Impressive run stop rep here by Alex Highsmith against LT Cornelius Lucas. Hint of a push/pull but hard to tell. Good job setting the edge on the outside throughout before shedding. A+ #Steelers pic.twitter.com/u3OsHXCED6

Alex Highsmith's best pass rush rep of the game. Inside swim over LT. Gets the pressure, forces the ball out. #Steelers pic.twitter.com/ZfuPKnAWiy

Stephon Tuitt sack working flawlessly with Cam Heyward on the stunt. Watch Highsmith go swimming to the inside. Seeing some variance already with his pass rush moves, which is nice. #Steelers pic.twitter.com/xrDsiIejT1