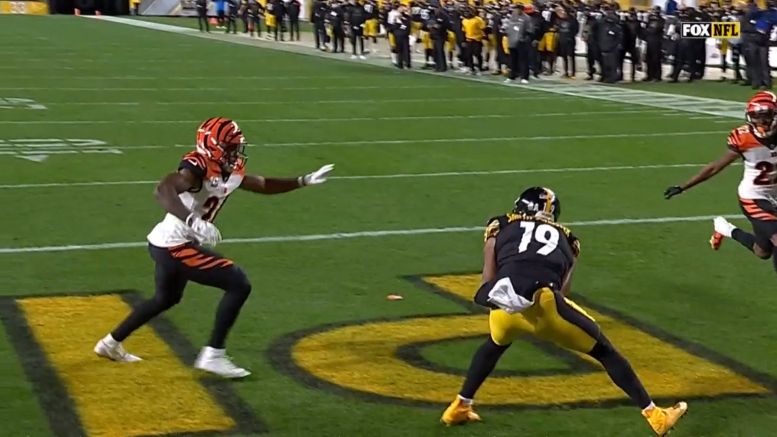 Even though they were able to rattle off 11 consecutive victories—a franchise record to begin a season, though not their longest winning streak of all time—the issues on offense that led to Monday’s loss were certainly present well before then.

In spite of the fact that he is one of the young members of the skill position group, wide receiver JuJu Smith-Schuster is the longest-tenured among them along with running back James Conner, both of whom were drafted on the second day of the 2017 NFL Draft.

Speaking to the media earlier today, Smith-Schuster was asked if he ever takes it upon himself to approach offensive coordinator Randy Fichtner or quarterback Ben Roethlisberger with suggestions or feedback about the offense.

“I just do what I’m told, man. I don’t complain or do anything like that”, he said. “I’m not trying to be a negative spotlight to anything. If I do see something that I think will help the team, later in the week I’ll definitely do that, but as far as just doing my job, that’s pretty much what we all do here. Just do your part, do your role”.

Off all the skill players on the team, Smith-Schuster may be doing his role—that which is asked of him—more consistently than anybody else. He has caught 73 passes on the season for 600 yards with six touchdowns. His very low 8.2 yards per reception is a byproduct of what they have asked him to do, which is to catch short passes and fight for yardage, which he has done.

“There’s no need to complain or change anything”, he added. “We’re 11-1, so what we have in the kitchen that’s cooking is really good”.

It’s best not to overreact to one loss. There are certainly things on the offense that need to work much better in the future than they did on Monday, but the Washington Football Team also has a talented defense that showed up to play a big game.

And that game could have gone much differently if not for seven or more dropped passes. Smith-Schuster even had one of them, but he certainly wasn’t the biggest culprit.