A few days ago, I posted a table on my Twitter that highlighted the Pittsburgh Steelers’ current historic sack differential (you should follow me: @BradCongelio):

As requested by @cnealhome, here is a look at sack differential leaders at week #12 since 2000. The 2020 #Steelers are currently on pace to break the #NFL record for the difference in sacks allowed vs defensive sacks recorded. @Steelersdepot @Alex_Kozora @bepryor @TheSteelersWire pic.twitter.com/q5v1htIszl

As you can see in the table, the Steelers, through Week #12 at the time, were at a historic pace dating back to 2000 with a net-positive sack differential of 31. In other terms, the Steelers defense has sacked the opposing quarterback 31 times more than the Steelers offensive line has allowed Ben Roethlisberger to be sacked.

But, as an astute Twitter comment pointed out, this difference could very likely be a result of Roethlisberger’s lead leading average time to release which is currently 2.14 seconds.
That argument makes sense. Opposing defense simply do not have time to get to Roethlisberger because the ball is out of his hands so quickly.

Because of that argument, I wanted to look at the correlation between Pro Football Focus’ pass blocking efficiency score and a quarterback’s average time to release. For what it is worth, PFF currently has the Steelers offensive line ranked as the fifth best in the league with an overall efficiency rating of 90.0. 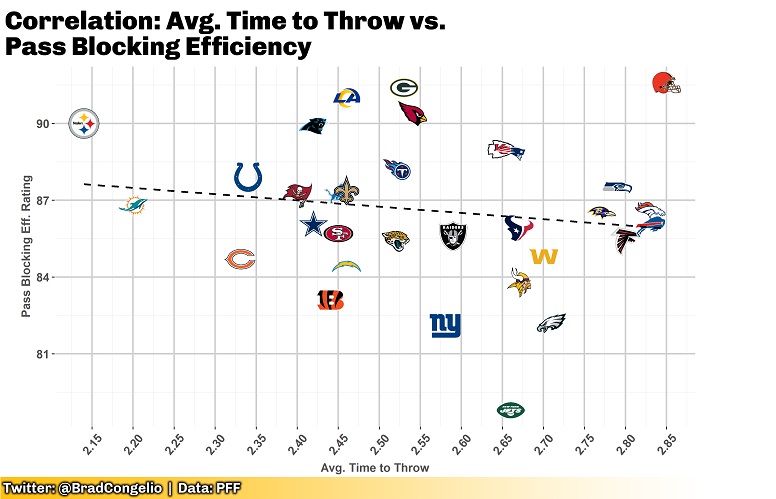 As you can see in the above chart, there is a rather significant correlation between those quarterbacks with a quick release and the offensive line’s overall pass blocking efficiency.

Except for the Cleveland Browns, as they are clearly an outlier and require further study as to why Baker Mayfield is able to have one of the slowest releases in the NFL, yet be behind one of the highest rated offensive lines in the league.

That said: the correlation should not detract from the job the Steelers offensive line is doing. Protecting Roethlisberger for those approximately 2.14 seconds is protecting him, nonetheless.