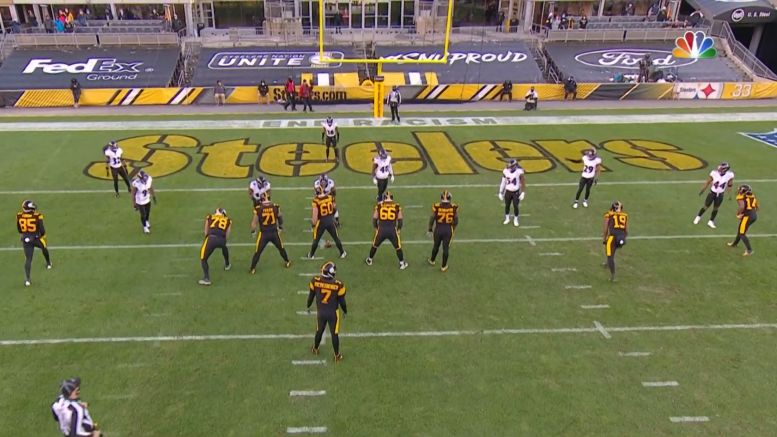 On paper, this game had the makings of a blowout. Of course, Pittsburgh Steelers fans know that they don’t often do blowouts, and it’s an even rarer thing for them to be able to pull that off against the Baltimore Ravens. Their last win over the Ravens of more than one possession was in 2017, for example.

And yet, by halftime, even with a defensive pick six, the Steelers led the Ravens by a margin of just 12-7, after the offense stalled three times in the red zone, two possessions ending in field goals, one in an interception. Many of Pittsburgh’s problems were their own, such as dropped passes, but the red zone offense as a whole has to take center stage.

The only explanation after the game that head coach Mike Tomlin could seem to stomach entertaining after the game was a visceral one. When asked why his team struggled in the red zone against a depleted Ravens defense, all he would offer was, “us sucking”.

You take those two factors together, add in the fact that the Ravens are missing a number of defensive starters, and haven’t had a full practice since before their previous game, and you have to scratch your head. It just doesn’t add up that they should have these struggles.

That doesn’t excuse dropped passes, or balls that could have been caught, from Chase Claypool, Eric Ebron, Diontae Johnson, and James Washington. Make even two of those catches and we’re having a much different conversation about the ‘play calling’.

Of course, suddenly losing your starting center just before the game and having to rely on a first-year player making his first start isn’t the ideal situation for your offense, either, though outside of a handful of plays, you can’t really say that J.C. Hassenauer was much of an influence, positively or negatively.

The Steelers would only get into the red zone once more throughout the game, on their third possession of the second half—and the first of four in the fourth quarter—completing the sequence with a one-yard touchdown pass from Ben Roethlisberger to JuJu Smith-Schuster. That would prove to be enough to secure the margin for victory, but needless to say, the red-zone performance is what made this game much tighter than it had any business being.