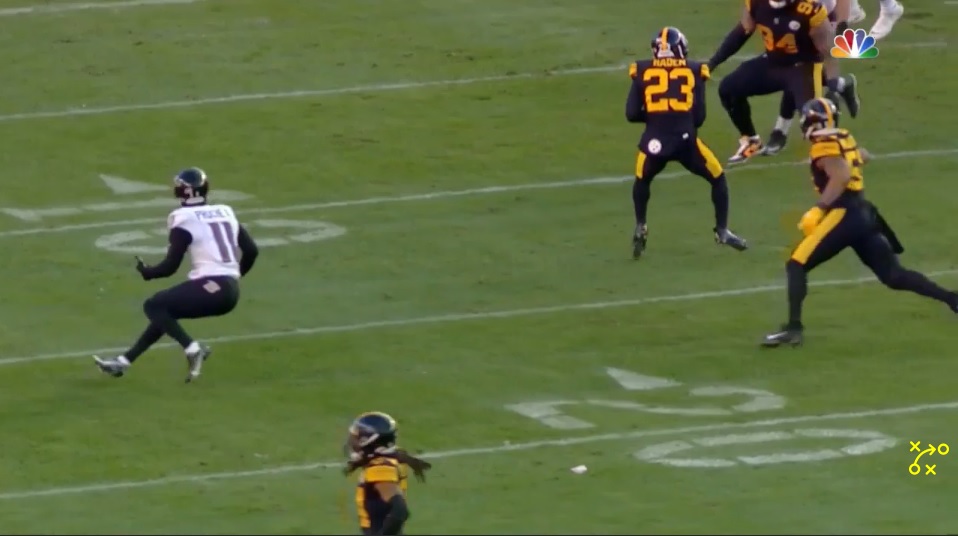 Pittsburgh needed a little, ok, a lot, of help from their defense to walk away with Wednesday’s victory over the Baltimore Ravens. The Steelers’ first score came via Joe Haden’s 14 yard pick six in the first quarter. Today, we’re going to break down that moment and one of the team’s empty checks against the Ravens.

Haden’s INT came on a trap coverage. A topic we’ve written about before but not in awhile so it’s worth revisiting. The idea is to bait the QB into thinking he has an easy throw into the flats. But the CB is reading the play and ready to jump any out route by the #2 receiver.

Specifically, I believe the Steelers ran “Cathy” coverage three times against Baltimore’s empty set Wednesday. There’s a ton of specific ways to play trap coverage: 2-Read/Palms, 5 Cougar, and Cathy are all variations of the idea.

Now with ESPN, Matt Bowen diagrammed Cathy coverage years ago while at Bleacher Report. For his Iowa team, a Cover 6 variant. If #2 runs a five yard out, the CB jumps the route. The safety is now responsible for #1 vertical while the apex player (in this diagram the Will linebacker) settling as the hook/curl defender. 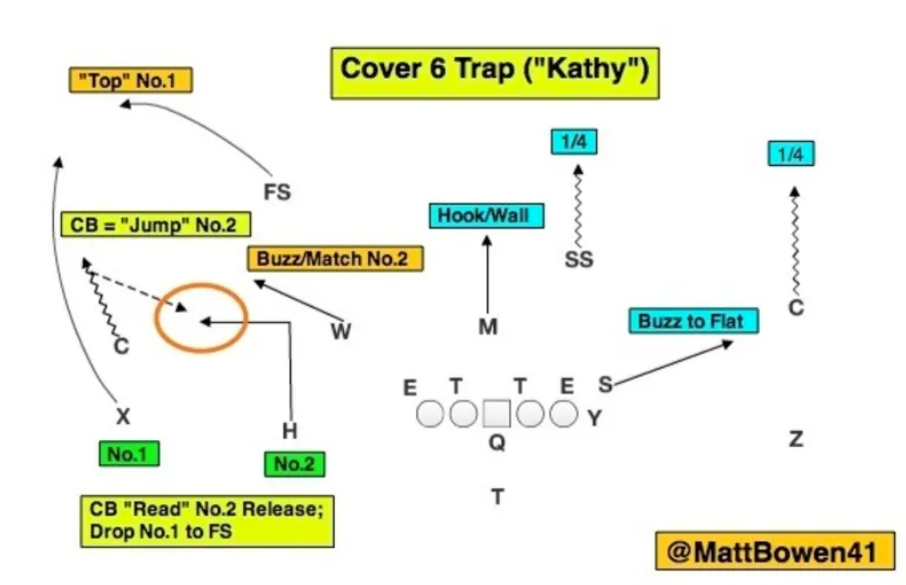 Couple more examples of it. X’s and O’s Labs has a great diagram of Cathy Coverage. 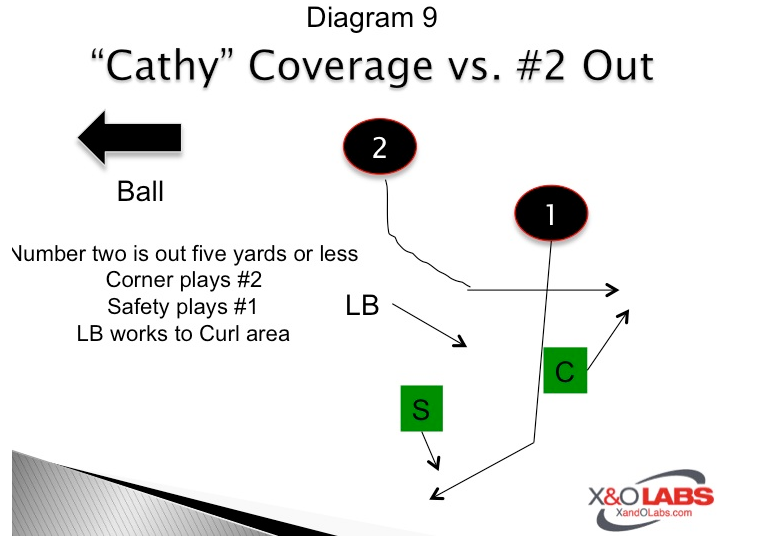 Former Ohio State DC and current Texas DC Chris Ash is one of the biggest proponents of the coverage. The website Eleven Warriors broke down Ash’s rules.

Cathy is utilized by Ash against spread formations, namely when an offense has two or more detached receivers to one side. Ash describes it as a “soft pattern read.”

With Cathy, it is the corner and safety that work in tandem to read the release of the No. 2 receiver to their side:

Wednesday, Pittsburgh trapped #2 to the two-receiver side against empty sets with this Cathy call. Here, the Ravens came out in 3×2 empty. To the two receiver side, the #1 receiver runs a vertical route. And #2 runs a quick out. Haden is using a vertical shuffle in off coverage. He reads the EMOL (usually the tackle) to get a high/low hat read to determine run or pass. Once he gets his high hat/pass read, he’s reading the WR through the QB and drives as #2 begins to declare out. Terrell Edmunds is now responsible for #1 vertical while apex player Avery Williamson has hook/curl responsibility. 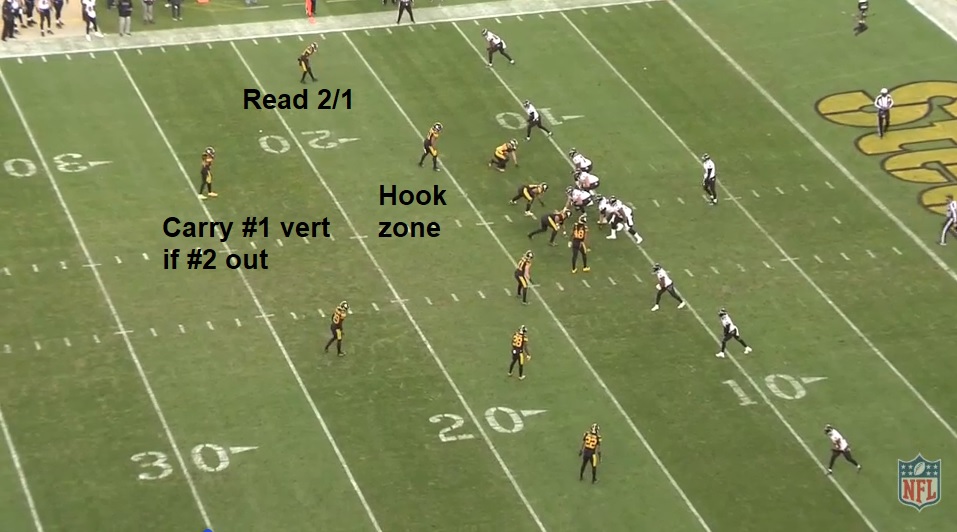 Robert Griffin III thinks he’s getting a Cover 3/4 look with Haden sinking and playing off at the snap. But Haden drives on the throw, jumps the route, picks it off, and houses it the other way. Touchdown, Steelers.

They played this coverage throughout the rest of the game. Later on in the 2nd quarter. 3×2 empty set. CB jumps the out route, safety carries vertical while the apex player settles once #2 is out and looks for anything working towards him. 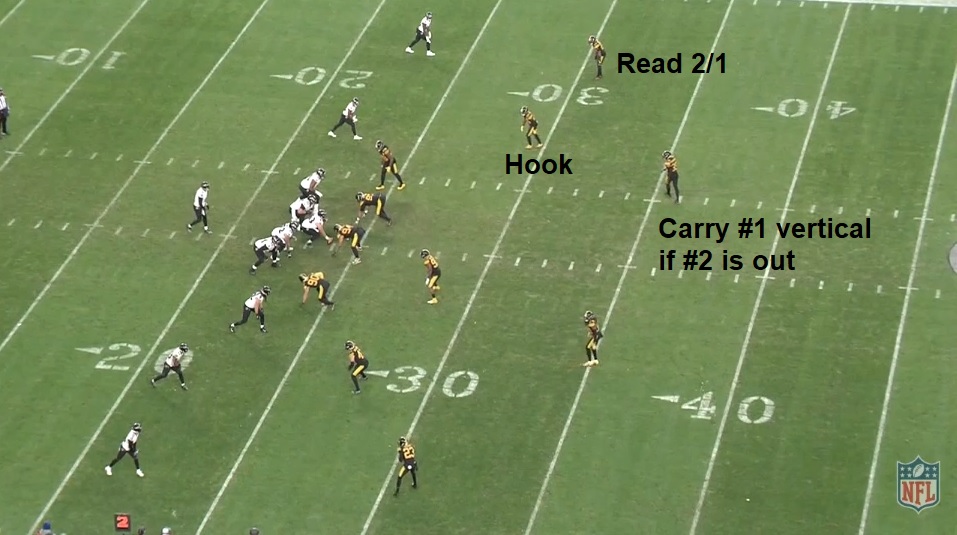 What’s interesting here too is the pattern match to the trips side. To the bottom, the #1 receivers runs an in-breaking route while the #2 receivers switches with him and gets vertical. As #1 declares inside, Haden points and passes him off to apex player Robert Spillane. Spillane is now responsible for #1 on the in-breaking route while Haden carries #2 (now the new #1 receiver) vertically.

To the top, Steven Nelson shuffles and lets #1 go vertical for the safety to pick up. He’s looking to jump #2 out though the throw goes elsewhere. RG3 hits Hollywood Brown on the in-breaking route and Spillane quickly makes the tackle for a seven yard gain.

Third example of it. 3×2 again. Trapping the out route to the two-receiver side. 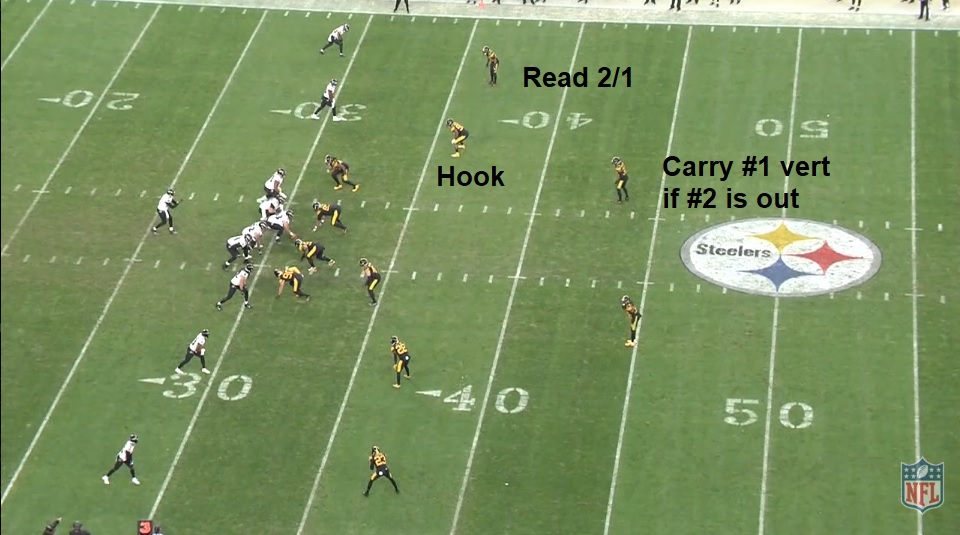 I’m guessing the Steelers checked to this coverage so often because they picked up on a tendency by the Ravens to run #2 out in their film study. RG3 never gets the pass off because of TJ Watt’s sack.

This clip is actually a little closer to 5 Cougar Coverage, which we’ll look at again below, because Steven Nelson has a slight man-turn here. Eyes on #1 to the top for just a split second on the snap of the ball to try to show man coverage before coming off it and getting his eyes to the QB and #2.

Pittsburgh didn’t exclusively use this against empty other. But it didn’t always work out so well. The Steelers ran this coverage on Hollywood Brown’s 70 yard TD. Haden went to jump #2 out but new QB Trace McSorley finally hit it vertical to #1. Risk here is forcing the safety to take a good angle and make a play on the ball but Terrell Edmunds takes a poor route (the pass was underthrown, to be fair, which makes the angle harder) and Brown races his way into the end zone.

That blemish aside, as I tweeted out Thursday, Haden’s INT Wednesday was very similar to the pick he had against the Arizona Cardinals last year. Empty set to the two-receiver side, jumping the out route.

As I mentioned at the top, Pittsburgh’s run variants of this coverage before. I think back to another game against Baltimore from way back in 2015. This was the same idea, jumping #2 out, but has Ross Cockrell in a press/man alignment with Lawrence Timmons making an “out” call to alert Cockrell. Cockrell now takes #2 while Timmons works to #1. Here, this is closer to 5 Cougar coverage because the LB is making the call to alert the CB, whose not able to read the route himself.

In Wednesday’s examples, you had a softer pattern read with the apex player settling into his hook zone, not working to #1.

Solid wrinkle to a standard Cover 2/Cover 6 look that’s been really successful over the years. Quarterback screws it up once and you have him second-guessing himself the rest of the game, one reason why RG3 was so ineffective through the air.