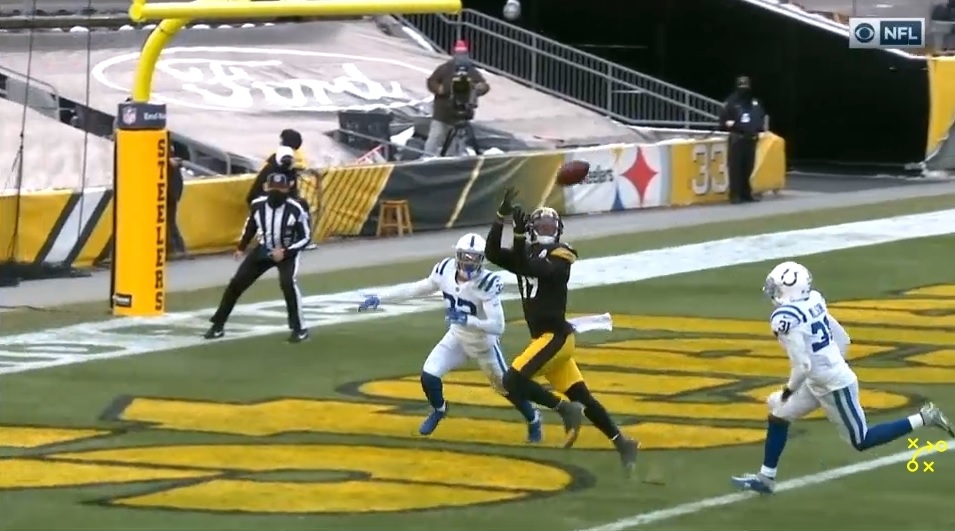 The struggles the past few weeks from the Steelers’ future Hall of Fame quarterback, Ben Roethlisberger have been well documented. One issue many teams and analysts alike started to recognize was the trend of the 17-year veteran ignoring the deep middle of the field with his throws. 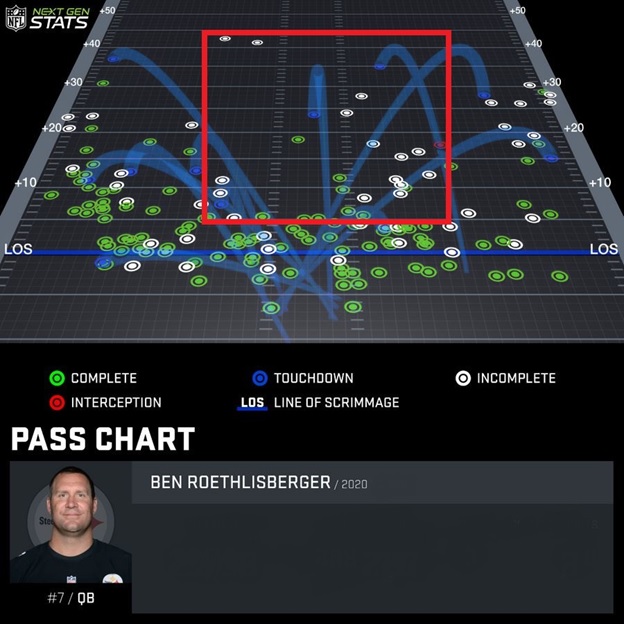 While Week 16 wasn’t a glowing success throwing to the middle of the field, it was a big part of jump-starting the offense and eventually pulling off the 17-point comeback over the Indianapolis Colts. Coming into the week, it was thought this could be the week Steelers and Roethlisberger gets the monkey off their back as the Colts are known for playing a ton of Cover 2, a coverage that is notoriously weak in the deep middle of the field.

Ironically, all but one of the clips I pulled from Sunday’s game aren’t even against 2-high looks. However, that isn’t a bad thing as it means the Steelers were able to successfully throw deep middle against a variety of different looks.

Let’s start with the first half, where the offense was a dumpster fire. The Colts are in what looks to be a cover 4 look. The near safety gets caught looking at the crosser from the front side and drives to close that window. Seeing the middle of the field open, Diontae starts to lean inside and is wide open. The only problem being Roethlisberger throws the ball outside.

While both players looked upset after this play on the TV broadcast, it’s hard to assume Diontae Johnson was correct over Roethlisberger. With that being said, it’s also hard watching the all-22 and not wanting the QB to throw this ball inside given the look.

This next play came towards the end of the first half where the Colts were largely playing back, but this was the drive you started to see Roethlisberger finally make some throws. It’s possible some of the confidence from this drive carried into the second half where he started to test the middle of the field more.

While it’s a minute detail, what I like about this play is Roethlisberger holding on to the ball a second longer, stepping up into the pocket, and finding his receiver down the field for a 17-yard gain. These are the types of plays we’ve all been accustomed to seeing from Big Ben, but have all but disappeared in the last few weeks.

The next throw came on the drive that ultimately sparked the Steelers’ offense even though the drive itself ended with zero points. The big play on the drive was a post to Chase Claypool for 34 yards. The Colts came out in cover 1, which is man coverage across the board, with a single high safety. Claypool does a great job of making the cornerback hesitate with his release before using his long strides to coast by him. Then, Roethlisberger is able to fit the ball in there between the safety and the corner.

Roethlisberger’s lower-body mechanics have also been off the past few weeks, possibly stemming from knee injuries that have been kept “hush-hush” as Ben himself has denied them publicly. Regardless, this was one that you got to see him keep his feet underneath him and actually step into the throw. When he does that, you can clearly see the difference.

The next clip shows the Colts in a Cover 3 look. Diontae Johnson simply beats his man on an inside speed release. While I’m not sure it’s catchable, even if Johnson doesn’t get interfered with, ultimately the yards are what truly matter.

The 20+ yard defensive pass interference put the Steelers in striking distance for Eric Ebron’s score that brought the game within three points. You see it every week in the NFL, defensive backs are going to make mistakes and grab receivers while throwing the ball down the field. While your goal when calling a play shouldn’t be in the hopes of drawing a penalty, you’re not going to get them at all if you don’t at least try to throw it deep.

The last play we’ll dive into may be Ben Roethlisberger’s best throw of the season. What eventually would become the game-winning play, the Colts came out in a 2-high coverage. JuJu Smith-Schuster is able to attack this 2-high look with what we called an “adjuster” route at Kutztown University. Then, Roethlisberger’s subtle pump fake gets the far safety to get flat-footed just enough for the ball to be tucked in behind him and into Smith-Schuster’s arms.

Former leading receiver of the Kutztown Golden Bears, Nate Hollander, gives his insight of the adjuster route ran here by JuJu Smith-Schuster, “If it’s 2-high split the safeties you have the option to sit. If it’s man coverage you stay on the move. There is also the ability to attack the safety in some situations where you stick inside and go upfield. This specific play though it looks like it was a game adjustment to split the safeties in this coverage because right when JuJu passes the linebackers he looks for the ball. You normally have the option to pass the linebackers, wrap around them, and hook up there, but there’s an in route. So I don’t think he had that option here.”

This speaks volumes as to how Smith-Schuster and Roethlisberger must be on the same page when reading a defense as the play progresses. It also shows how many moving pieces there can be on any given play. Many casual fans assume everything is set in stone before the snap and all you need to do is fix one thing to get an offense back on track. In reality, there’s so much mental processing that goes into each play from the initial play call, to pre and post-snap reads, to the actual execution that it will make your head spin.

If you want a deeper breakdown of the Smith-Schuster touchdown Alex Kozora did a fantastic film room on it earlier this week.

While it’s not the complete cure, successfully attacking the deep middle of the field certainly will help this team in the long run. You could see Sunday that once the Steelers started attacking deep, the Colts were forced to back off. This results in the short and intermediate passing game opening back up for Pittsburgh. It cannot be understated just how important that is for a team that cannot run the ball to save its life right now.

With Mason Rudolph starting in place of Ben Roethlisberger in Week 17, we’ll have to wait until the playoffs to truly see if the offense can build on their second-half performance. If the Steelers can have similar success in the first round of the playoffs, it’ll bode well for the entirety of the offense and, ultimately, the outcome of the game.