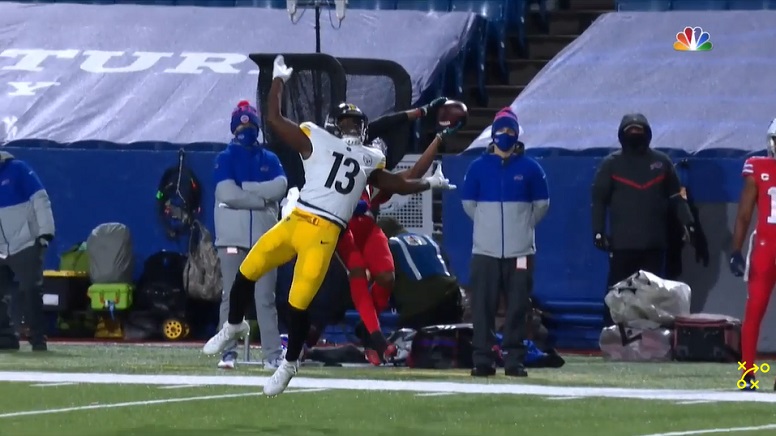 If there’s one thing that’s been consistently missing from the Pittsburgh Steelers passing game this season, in addition to receivers sometimes not catching passes that are on target, it’s deep completions down the field. Will that change in the final three games of the season and on the heels of the Steelers losing back-to-back games? According to Steelers offensive coordinator Randy Fichtner on Thursday, it sounds like a more concerted effort to push the football down the field will be made starting on Monday night against the Cincinnati Bengals.

“Well, maybe because there hasn’t been as many allocated to it, practice time,” Fichtner explained on Thursday when asked why more intermediate to deep shots haven’t happened and why they are not consistently completed when they are attempted. “Whatever you missed in that little three-week time of walk-through, playing not playing, games being moved, I think back to just repetition of throwing and catching for our guys. That’s not an excuse. If there would have been one area you would have backed off of that, it would have been potentially throwing the ball down, deep balls.

It’s worth pointing out that in the last four weeks of team official injury reports that were released, there were 11 listed practices and Roethlisberger practiced in four off them with one of them being on a limited basis.

In the Steelers last three games, quarterback Ben Roethlisberger has attempted 17 total deep passes that have traveled more than 15 yards past the line of scrimmage, and he completed just six of them for 150 yards and a touchdown with one interception. One other deep throw not counted in those stats was a pass to wide receiver Chase Claypool against the Baltimore Ravens that drew a defensive pass interference penalty.

Despite Roethlisberger not being overly great at connecting deep connsistenrtkyt since the 2016 season, Fichtner made it clear that the Steelers quarterback is still able to do so ad that more of an emphasis is likely to be put on that element of the passing game moving forward into the final portion of the regular season.

“I would say that [Ben Roethlisberger] is more than capable of throwing the ball down the yard and making plays, Fichtner said. “We have enough guys that can actually go up and make a play. I think we have probably done it less than most. Just those numbers alone might say that and that might be an emphasis for us moving forward.”

Fichtner tried to make it clear on Thursday that while he understands the potential need to throw more passes down the field and that he’s not afraid to do so because of the importance that chunk plays have in games, the offenses inability to produce those explosive plays of 20 yards or longer, just seven in the last three games, hasn’t been helped with several players having drops in shorter catch and run pass plays.

“I’m not afraid to throw it deep,” Fichtner said on Thursday. “I think a couple weeks back, we started the game in Washington, and we are going to attempt to throw it down the yard. It can be as early as the first play and definitely can be the last play. It’s something that we have to keep working and getting better at because they create chunks. Chunks are kind of what you need to sustain
drives. It’s awful hard to put together a drive like what happened in Tennessee. We had it 18 plays, we had to overcome two penalties. Just an awful lot of plays to keep trying to get a first down and then having to get a third down and then have to get another third down.

“The chunk plays eliminate a lot of that. That’s where I think we may be missing right now. And you’re not going to create a chunk play if you are throwing short and dropping a potential run long. I look at some of the short balls we throw, “dink and dunk” type balls, a lot of those balls come out running, and they become chunk plays. If we are not making those plays consistently, then you are taking away another opportunity for a chunk.”

Against Washington a few games ago, Roethlisberger attempted eight deep passes for 82 yards. Three of those attempts and one completion came in the first quarter. Even so, Roethlisberger hasn’t been overly sharp with his deep passes this season and that was punctuated late in the team’s most-recent loss to the Buffalo Bills on Sunday night when the quarterback severely underthrew and open James Washington down the field midway through the fourth quarter. That pass was intercepted, and it would be the last one Roethlisberger would throw in that game.
Fichtner vowed more than once on Thursday that the deep passing game will get attention this week in practice and how the team will go about doing that.

“Today we are going to throw deep balls,” Fichtner said. “We will do it in individual and there won’t be a defender on them. We won’t tangle anyone’s legs up and be falling down 30 yards down the field, but it does give you that sense of timing and rhythm again and potentially just seeing the throw and catch and the adjustment by a receiver. We know we’ve got to get back to that. We know in any one given year since I’ve been here, the opportunity to throw the ball past the sticks and possession downs is critical to us and being able to take shots on first and second down have to be completed at a greater rate.”

For whatever it’s worth, the Steelers offense will face a Bengals defense on Monday night that’s allowed 40.5 percent of 84 deep pass attempts to be completed against them for 957 yards and five touchdowns with four interceptions. In the Week 10 meeting between the Steelers and Bengals, Roethlisberger completed just there of his nine total deep pass attempts for 94 yards.

I forgot to run my % column down pic.twitter.com/KH53ZRSt9W