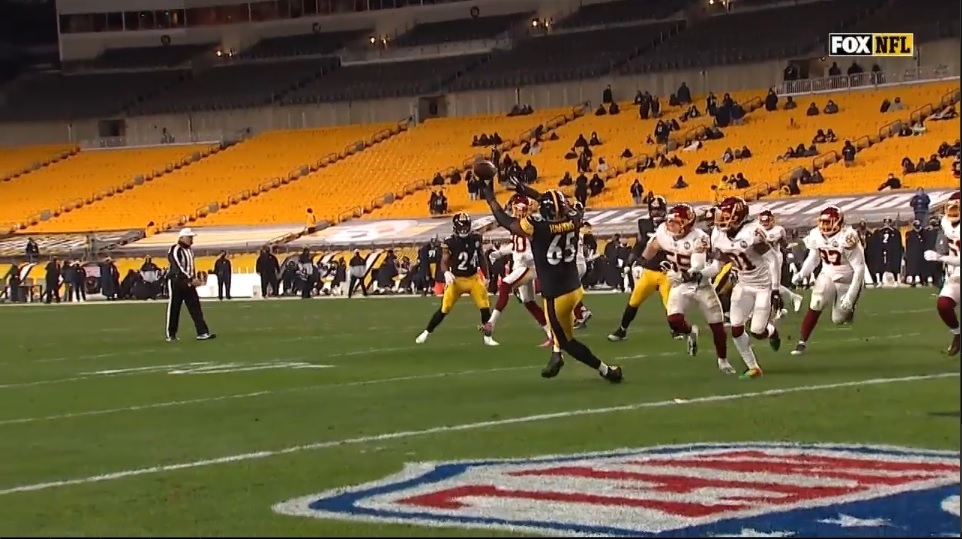 It’s hard to put all the blame on the offensive coordinator when the offense fails to score on four straight plays from the one yard line. But Randy Fichtner is re-thinking his strategy in that miserable sequence that took place in Monday’s loss to Washington. Speaking to reporters in a Zoom call yesterday, Fichtner evaluated his playcalls.

“I know I can probably be more committed to running.,” Fitchtner said Thursday according to a team transcript. “Maybe it needed four opportunity runs to get it in from the one as opposed to maybe trying to fool them. Maybe trying to boot them or naked them, that type of thing.”

Pittsburgh ran the ball up the middle with Benny Snell on three of their four plays late in the second quarter. He was stuffed each time, including tackled by Chase Young on 4th and goal just before Snell leapt over the goal line. The lone exception to a Snell handoff was a playaction that attempted to hit Jerald Hawkins in the flat. Hawkins stumbled over himself and the pass hit off his hands incomplete. Even had he caught it, he wouldn’t have landed in the end zone.

It’s been one of several “too cute” calls in key situations over the past two weeks. That was Hawkins’ first NFL target, though it’s worth mentioning he had a sweet one-handed snag in college at LSU (an illegal touching call, though, of course).

I was definitely not in favor of throwing to Jerald Hawkins. But his one reception at LSU was *pretty* impressive. Nifty one-handed snag.

The Steelers’ red zone woes have been a large issue the past two games. Against Baltimore and Washington, they’ve gone a combined 2-7. It’s the reason why they’ve had their two lowest offensive outputs of the year. 19 points against the Ravens, 17 against the Football Team.

Fichtner said a stronger run game is an obvious area of focus for the remainder of the season.

The Steelers’ red zone offense is currently ranked 11th, a good number despite a miserable past two performances. They’ll face a Buffalo Bills’ red zone defense that ranks middle of the pack, tied 16th, this season.