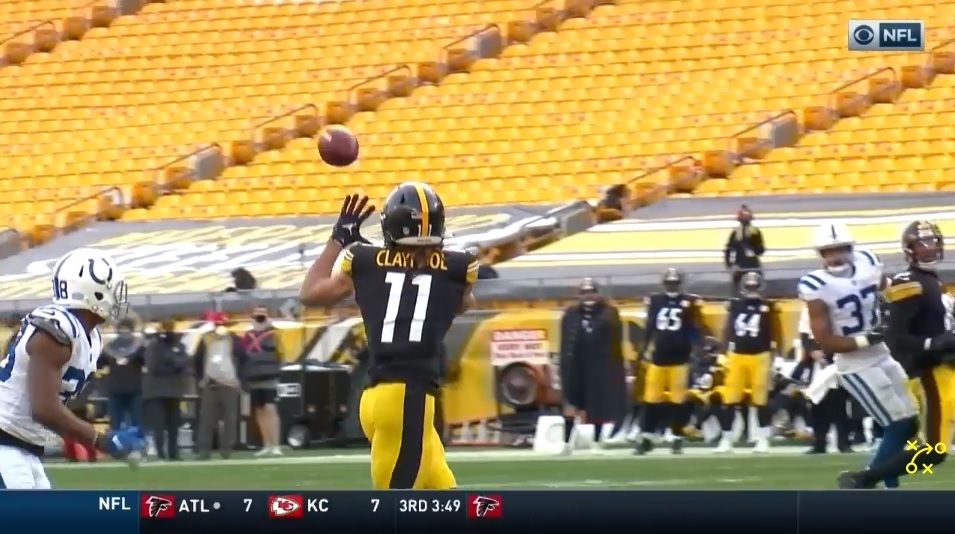 “I think he has navigated it great,” Fichtner said of Claypool. “He is above the curve when it comes to physicalness and conditioning and mental. I said that in the beginning. I thought that was one of the reasons why he came out of the gate so quick. I do think there is probably some lull that will happen. It’s funny, it always seems to happen about that time when your normal college season would be over. About 11, 12 games, that’s what you’re used to. That is what their bodies are used to. I won’t say that he hit that wall, but I will say that there is something there that you have to work yourself through. I saw it, you can see it.”

In the Steelers three games from weeks 13 to 15, Claypool caught just eight passes for 107 yards on 18 total targets. In the Steelers Sunday home win against the Indianapolis Colts, however, Claypool caught four passes for 54 yards after not being targeted in the first half. Because of that, Fichtner hinted on Thursday that the Steelers rookie wide receiver and Wednesday winner of the team’s annual Joe Greene Award might be getting his second wind and thus making it past the proverbial wall.

“He may have come out of it a little bit last week,” Fichtner said of Claypool’s game against the Colts on Sunday. “I’ve just seen a little more pep in his step, a little more understanding, a little more sense of urgency. I think we’ve got so many young guys that the urgency of playoffs and what’s at stake later in the year that we have to continue to work that aspect as well between the ears, because it is that important. It’s that important that everything we do in meetings has to show up on the field. Things we do in walkthrough have to show up on the field. The details and the fine things have to be done. This time of year, it gets exposed if you’re not.”

On Wednesday, Claypool met the media after being named the Steelers top rookie of 2020 and during his session he was asked about how he feels about the job head coach Mike Tomlin has done during the last several games when it comes to managing the wide receiver’s playing time in hopes of his player being able to navigate around the rookie wall.

“Yeah, I mean Coach T [Tomlin] has been in this game for a lot longer time than I have,” Claypool said. “So, whether I believe it or not, I think he knows what he’s doing. So, I’m feeling good now, so whatever he did, whether it was necessary or not, I’m feeling good heading into playoffs and I think that’s all that matters.”

That is all that matters. The Steelers now have one regular season game remaining before the playoffs start and that will take place on the road Sunday against the Cleveland Browns. Claypool will likely play a good 30-40 offensive snaps in that game against the Browns and a few more on special teams as well. It would be good to see him make a few more big catches on Sunday and potentially score ahead of the playoffs starting. His last touchdown came way back in Week 11 against the Jacksonville Jaguars.