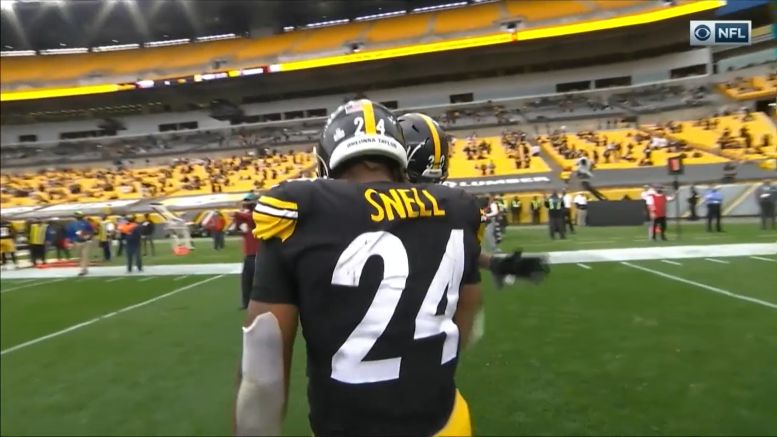 Is there anything that people like to talk about regarding a really good Pittsburgh Steelers team more than their faults and blemishes? If you listen to the discussions, this is the worst undefeated team in NFL history—which is like being the worst pizza. An awful lot of teams in similar positions have gone on to win the Super Bowl.

While the drops in the passing game are currently the topic de jure, the standing favorite, particularly with fans and the local media, is the running game. After barely breaking 100 yards on the ground in the game before last, the Steelers dipped back below that mark again Wednesday for the fourth time in five games.

Offensive lineman David DeCastro was asked to talk about the offense, and the fact that they skew so heavily into the passing game, with Ben Roethlisberger throwing more than 50 times against the Ravens, and what he thought about what was being called.

“The ball’s coming out quick when Ben gets in his mode and he’s just finding guys”, he said. “We have great talent on the edge and young receivers. They don’t really care what it takes. You can’t force the run if it’s not there. If the safety’s in the box, you’ve got to pass the ball. Whatever it takes. I’m an o-lineman. I don’t really care. You can say ‘run game, run game’, and I’m like, whatever it takes. It’s not my job to draw up the plays or script it. I listen to Ben and Randy and go from there”.

This isn’t in any way a comment on DeCastro’s intelligence, because he actually is rather intelligent, but he’s right. His job isn’t to think—at least about those kinds of things. He is given a play and he blocks for that play. That’s what he does. Adding more to that would just introduce unnecessary complications.

And of course the Steelers are winning by throwing the ball around a bunch. They use the short passing game as an extension of the run game, putting the ball in their elusive receivers’ hands and allowing them to gain yards after the catch, something that guys like JuJu Smith-Schuster, Diontae Johnson, and Chase Claypool have done well.

That’s why the Steelers rank 2n2d in the NFL in net yards per pass attempt at just 6.1, yet they also rank fifth in passing touchdowns and seventh in the fewest interceptions thrown while having the fifth-most pass attempts in the NFL.

Of course, they also don’t want to be near the bottom of the league in terms of yards per rush, which they are. There’s no question the run game needs to get better, something head coach Mike Tomlin has acknowledged. But better doesn’t necessarily mean more, either.