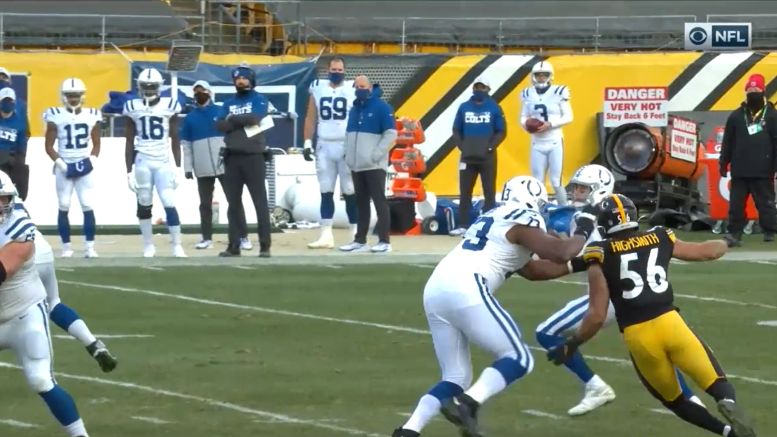 Alex Highsmith has been in the starting lineup at right outside linebacker for four games. He has not picked up a sack during that span. That does not mean that the Pittsburgh Steelers rookie third-round draft picks has not played well. In fact, Sunday’s game against the Indianapolis Colts may have been his best yet.

A late-producing small-school product, Highsmith rose up the draft boards because of his athletic abilities, and the Steelers saw him as a potential future starter with Bud Dupree a pending free agent for 2021.

A torn ACL suffered by Dupree shoved Highsmith into a starting role earlier than anticipated, however, and with Super Bowl aspirations, they can’t afford for him to be on a learning curve. They need him to execute the defense to a satisfactory degree right now. Fortunately, by and large, he has, and his teammates have noticed.

“Alex has taken steps week in and week out, and we need them”, defensive captain Cameron Heyward said of the youngest starter on defense right now. “Bud’s been a big contributor for us for a long time, and we understand Alex isn’t gonna be Bud, and we can’t ask that of him, but Alex can still be a factor”.

Highsmith finished the game with a career-high seven tackles, and while he did not record a sack, he did have a game-high two hits on the quarterback.

One of them in particular was impactful, as the hit forced Colts quarterback Philip Rivers to throw an errant ball at a key moment in the fourth quarter that allowed slot cornerback Mike Hilton to run under it and intercept it.

On the season, Highsmith has now recorded 38 tackles, including four for loss, with one sack, six quarterback hits, and an interception. He has recorded at least five tackles in three of the four games that he has started, and has at least one quarterback hit now in three consecutive games.

Highsmith had only played 138 defensive snaps over the course of the first 11 games of the season, prior to Dupree’s injury, but he has logged more than 200 snaps in the four games since, in fact, closer to 250. He is nearing 400 defensive snaps on the season.

While he is not yet putting up the sacks, his tape shows that they are likely to come. He has a good understanding of the pass-rushing process and the necessity of building counters and setting up moves. He also has an intriguing repertoire of moves. Now it’s about putting it all together, and perhaps putting on a bit more weight.