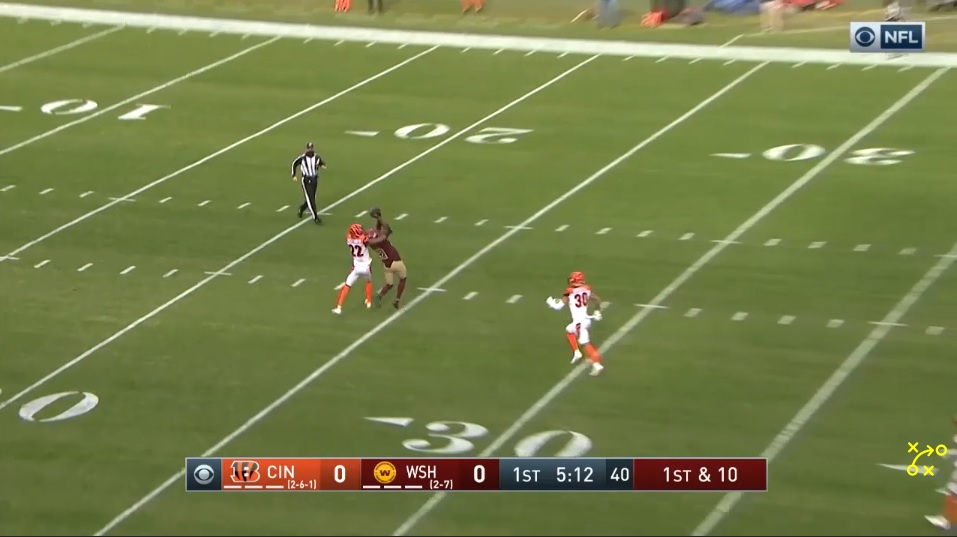 Washington has one receiver to the left and a running back flanking the quarterback to the left. To the right they have three players aligned tight to the formation.  The Bengals have their nickel defense on the field with 2 linebackers, 2 safeties and three cornerbacks.

Wide receiver Terry McLaurin (17) is wide to the left with DB William Jackson III (22) shading him to the outside. The bunch to the right of the formation has from inside to out tight end Logan Thomas (82), wide receiver Cam Sims (89) and running back J.D. McKissic (41) on the outside.

Quarterback Alex Smith (11) will take the snap and fake it to running back Antonio Gibson (24) who will release into a curl route in front of the linebackers. Thomas will chip on the edge before releasing into the right flat and McKissic will run a shallow cross. Sims will run an over route behind the linebackers with LeShaun Sims (38) the cornerback to that side trailing him.  McLaurin will run a deep post guarded by Jackson.

The route combination by Sims and McLaurin will force the deep safety Jessie Bates III (30) to make a decision.  If he stays deep Smith has the over route but in this case Bates comes down to help with Sims and Smith takes the one on one shot to McLaurin for a 42 yard gain.

Steelers Scenario – Right off the bat this would be a change as the Steelers don’t use 22 personnel that often let alone with one of the running backs not being a fullback and they don’t throw it deep to the middle very often. Chase Claypool has had the most success on deep routes so use him on the Post route and JuJu Smith-Schuster on the over route.

The Giants will start with a three wide receiver bunch to the left and to the right a tight end in the slot with a running back lined up outside. The Bengals are in their nickel defense and will play Man coverage with a single high safety.

With the Bengals having linebackers in the A gaps at the line of scrimmage quarterback Daniel Jones (8) will move the running back Wayne Gallman (22) from split wide to the backfield to help with protection. The three wide receiver bunch to the left is mirrored by Jackson, Sims and nickel DB Mackensie Alexander (21). To the right tight end Evan Engram (88) is guarded by safety Vonn Bell (24).

The Bengals handle the crisscrossing releases of the bunch pretty well with Alexander taking Golden Tate (15) on the quick out route, Sims trailing Sterling Shepard (87) across the field getting help from linebacker Akeem Davis-Gaither (59) and  Jackson sticking with Darius Slayton (86) up the seam.  From the snap Jones will look left to move the safety away from where he wants to go.

To the right Engram jabs to the inside on his release freezing Bell for a second before he release to the outside on a go route.  The tight split gives Engram tons of space to work with and once he gets over the top of Bell it’s a just a footrace that Engram wins for a 53 yard gain.

Steelers Scenario – The Steelers could try this with Ebron if they think he can win off the line of scrimmage or they could try it in 10 personnel to match up one of their receivers on a safety or the fourth DB.  Any of the Steelers WR’s could be use in the Engram route, it’s all about holding the safety and getting the best match up.

The Dolphins line up in and empty formation with 2 receivers to the left and 3 to the right. The Bengals are in nickel with two safeties deep and will play matchup Zone coverage underneath.

To the left DeVante Parker (11) is outside with Jackson over him with Myles Gaskin (37) in the slot with Davis-Gaither across the line.  To the right they have tight end Mike Gesicki (88) in the tight slot, receiver Lynn Bowden Jr (15) in the slot and Mack Hollins (86) on the outside. The defenders to that side are linebacker Logan Wilson (55), Alexander and Sims.

Parker will run a deep Curl and Gaskin runs an out and up. Bowden and Hollins will run quick In routes with Gesicki running a Post to the middle of the field.  The two In routes keep the second level defenders from getting depth and the out and up will hold the safety to that side.  Gesicki’s routes starts outside to clear the linebacker which gets the safety to move slightly to the outside before Gesicki cuts inside. The middle of the field is wide open and quarterback Tua Tagovailoa (1) almost leads him too much but Gesicki sticks hit right hand out and takes a big hit while making an impressive catch for a 20 yard gain.

Steelers Scenario – The Steelers like to spread it out so this play may be in their playbook.  This could be a play for Ebron in the middle if the Steelers decide to use that area more. Against Man coverage the out and up could be an excellent option with Anthony McFarland as well.