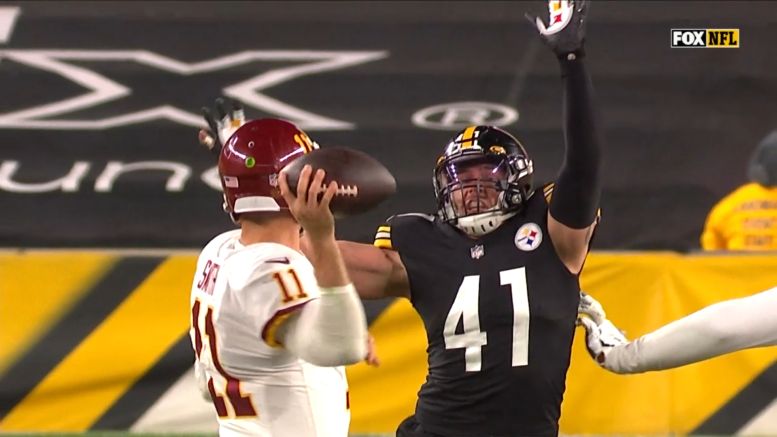 For the time being, we don’t know exactly how long the Pittsburgh Steelers will have to be without Robert Spillane, who has become their signal-calling starting inside linebacker since Devin Bush suffered a torn ACL in the first half of the season.

Spillane, a second-year player who saw his first snaps on defense in 2020, had been playing serviceably or better in Bush’s stead, and the team continued to win, as he established himself and the team grew confident in him. He was making a play, blitzing and knocking a pass down, when he suffered a knee injury on Monday night against the Washington Football Team.

Avery Williamson, a veteran starting linebacker the Steelers acquired just before the trade deadline to secure depth for the position, took over for Spillane for the remainder of that game, including wearing the green dot, and, with Vince Williams now on the Reserve/Covid-19 List, will have to play a starting role and then some on Sunday against the Buffalo Bills.

Spillane can certainly potentially miss multiple games, but according to Williamson, he’s not going anywhere, and has been impressed with what he’s seen. “I’m glad Rob didn’t [get seriously hurt]. It sounds like everything’s gonna be good. Hopefully he’s gonna heal up quick. He’s having a great season. I definitely give him credit. He’s been having a great season”, he told Christ Mueller, Andrew Fillipponi, and Arthur Moats on The Fan on Tuesday.

Over 12 games and seven starts, Spillane has logged 377 defensive snaps for the Steelers this year. During that time (and also including special teams tackles), he has recorded 45 total tackles, including four for loss. He has two sacks, three hits, an interception returned for a touchdown, four passes defensed, and a fumble recovery.

Originally signed to a Reserve/Future Contract at the start of last year, the Western Michigan product spent half of the 2019 season on the Steelers’ practice squad before an injury to Ulysees Gilbert III opened up a roster spot for him.

He carved out a niche performing at a high level on special teams. A player who was consistently noticed by coaches and teammates in practice settings, he worked his way to the top backup spot at the start of the 2020 season, following the departures of Mark Barron and Tyler Matakevich. By and large, he has shown that the team’s confidence in him was well-founded.