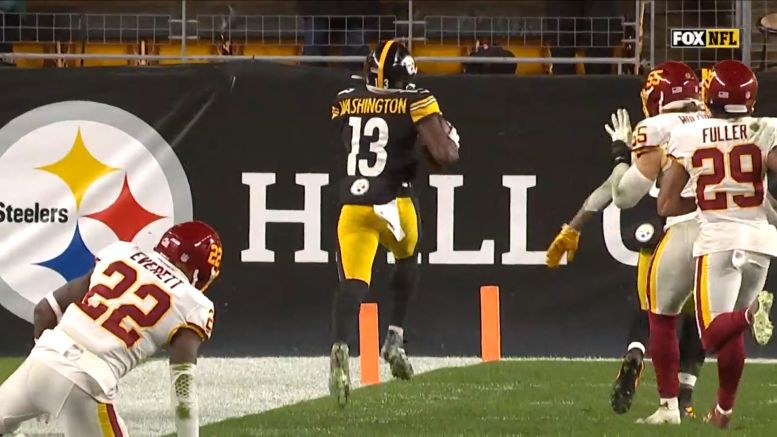 Reasoning: Although he is still not seeing the sort of playing time that he had earlier in the season, James Washington was a bit more active in the game plan against the Washington Football Team, and he was able to deliver some big plays as a result.

The Steelers offense got off to a terrible start in yesterday’s game, failing to record a first down on their first two drives. They only got one on their third drive as well, and that was thanks to a 30-yard catch by James Washington, who was also targeted on an errant deep ball on the first play of the game.

Later in the first half, after the defense got a stop and gave the offense starting field position from midfield, Washington turned a short pass into a long gain, breaking a tackle and beating the rest of the defense for a 50-yard score. It was his fourth touchdown of the season, setting a new career high.

The third-year wide receiver has been seeing a reduced playing time for the majority of the season at this point, a byproduct of the emergence of rookie wide receiver Chase Claypool, occurring simultaneously with Diontae Johnson getting healthy after dealing with injuries.

Even though he has been seeing fewer snaps, he has still found ways to make plays. He had a big third-down conversion last week. A few games ago against the Dallas Cowboys, he only had one catch, but it was a 17-yard touchdown.

He had his two longest plays of the season yesterday against the Washington Football Team of 30 and 50 yards, and he now has five explosive plays in total on the season, two of which have gone for touchdowns.