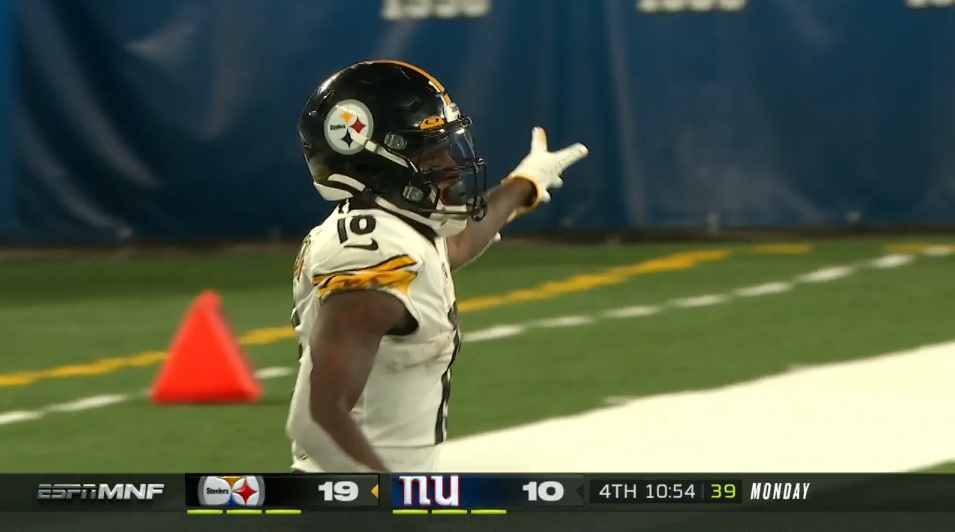 After all four of their QBs were ruled ineligible, the Denver Broncos were forced to turn to WR Kendall Hinton as their “quarterback.” First NFL game, first NFL start, 24 hours notice, good luck kid. Hinton played QB early in his career at Wake Forest and made his debut Sunday against the Saints. Things went about as well as you’d expect. Hinton went 1/9, threw two picks, and the Broncos got shellacked, 31-3.

Let’s hope it never happens but what if the Steelers found themselves in the same situation? Mike Tomlin said yesterday the team would never put themselves in such a predicament – and you can bet every team is reviewing their own policies – but let’s imagine the nightmare scenario. Ben Roethlisberger, Mason Rudolph, Josh Dobbs, and Duck Hodges aren’t able to play. Wildcat plays aside, what guy is the man they’d turn to on 3rd and long?

Who’s next man up?

Here are a couple of options.

WR Diontae Johnson – If it were me, Johnson would probably be the pick. For a couple reasons. He has plenty of NFL experience. Playing on Sundays, knowing the playbook, having an overall feel for the game aren’t issues for him. Johnson would be an excellent Wildcat-type quarterback. An athletic, shifty guy who can make plays one-on-one when asked to carry the ball.

He also has a quarterback background. He played the position at Lennard High School in Ruskin, Florida. As a junior, he threw for nearly 1000 yards and seven touchdowns. He never threw a pass at Toledo and even the competitive Florida high school football scene is a far cry from the NFL. But he’s the best of an otherwise terrible situation.

TE Zach Gentry – Gentry is the rare “QB turned TE” career arc. In his home state of New Mexico, he was one of the top QBs in the nation coming out of school. ESPN rated him as the nation’s ninth best quarterback while Scout called him the best QB in his state. He threw 27 career TD passes for Eldorado High School. While he would soon switch to tight end in Ann Arbor, he was recruited as a quarterback, drawing one headline that read, “Is 4-Star Zach Gentry The Quarterback Who Can Bring Michigan Back To Glory?”

He wasn’t that guy and like Johnson, didn’t throw a single pass in college. But he’s a big guy who could at least fire a couple shots downfield and hope for the best. Here’s a very grainy video of his highlights slinging the rock.

WR Cody White – Now we get into guys who are similar to Hinton. Players not currently on the Steelers’ active roster. Like so many guys who made it into the NFL, White was his team’s best athlete and Swiss Army Knife in high school. That included playing quarterback part-time. As a senior, he threw nine of his 31 completions for touchdowns, starting his first three games under center before shifting out to receiver.

And unlike Johnson or Gentry, he actually threw a couple passes when he arrived at Michigan State. I mean “a couple” literally – three of them – and just one was completed for a measly six yards. But hey, he did it. Check out his lone college completion to QB Brian Lewerke.

WR Deon Cain – Cain with a similar story as White. Cain, though, was a quarterback for most of his high school career though played in a run-heavy offensive attack. At the Army All-American Bowl, he did fire a 54 yard touchdown pass.

As a freshman at Clemson, he completed his only collegiate pass for 35 yards too. He doesn’t throw a bad ball and his last two passes have gone for 89 yards and a touchdown. Cain might be fun to watch play quarterback. For a snap, anyway.

CB Joe Haden – Here’s one if you want to get really wild. Haden was actually a fantastic quarterback at his high school, Friendly High in Maryland. He set a state public school record with over 7300 career passing yards and 80 touchdown passes. 38 of those scores came as a senior. I’m honestly not sure who decided to ever move him to quarterback but it all worked out in the end.

Here’s a really cool compilation of some of his best high school moments.

Haden wouldn’t be the ideal choice given the fact he’s ya know…now a cornerback but maybe he could still try a Hail Mary.