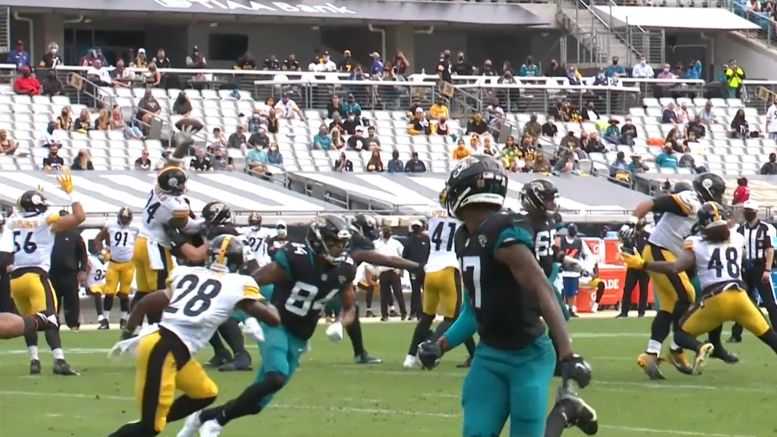 It’s not the first time that he has played his former team, but 11th-year veteran defensive lineman Tyson Alualu, as any player who has experienced it knows, took a special pride in returning south to face the Jacksonville Jaguars as the starting nose tackle for the Pittsburgh Steelers on Sunday, on a team with eight more wins, no less.

And he was thrilled when he made one of the most significant plays in the game late in the first half. With the Steelers’ offense struggling to move the ball early on, it took them until about the middle of the second before finally cracking the end zone, with quarterback Ben Roethlisberger finding wide receiver Chase Claypool for a 31-yard score.

It looked as though the Jaguars might manage to offer an immediate response and tie the game back up at 10-10, as they were driving consistently, and looked good getting into the end zone. On 2nd and 9 from the 11-yard line, however, Alualu was able to get a hand up and tip a Jake Luton pass.

Safety Minkah Fitzpatrick read the bounce and nestled under the ball as it came down for his third interception of the season, taking points off the board for the Jaguars. He returned it 37 yards to the Steelers’ 39-yard line, and ultimately led to a second consecutive touchdown drive.

In other words, that tipped pass proved to be a critical turning point in the game, with the Jaguars threatening to score a touchdown, only to lead to a touchdown off of a turnover the other way. It was at least a 10-point swing that allowed the Steelers to take a 17-3 lead into halftime, and potentially even a 14-point swing. It’s a much different ballgame from 10-10, that’s for sure.

That was the second and the last time that the Jaguars would even approximate a threat against the Steelers during the game. They would not even reach midfield at any point on their seven subsequent drives before the game was finally over. In fact, they would only manage six more first downs and a total of 75 net yards.

One might be inclined to wonder how this would be a different ballgame if, instead of Alualu getting a hand on that Luton ball under pressure and Fitzpatrick nestling under the floater, he actually connected with his target in the end zone and tied the game with over a half to play.

Would things have gone much differently except for that 14-point swing—which still wouldn’t have even made it a one-possession game, mind you? At the end of the day, it doesn’t matter, because it happened as it happened.

And Alualu has another victory against his former team, who, by the way, went 30-82 while he was there with just one non-losing season—his rookie year back in 2010. A decade later, he’s gotten a third of that win total in just five eighths of a season. Not bad.