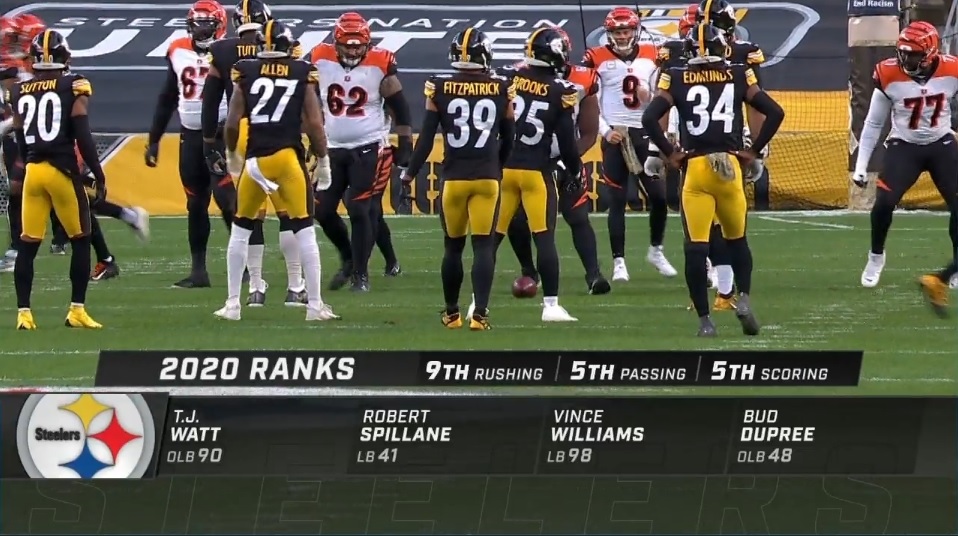 As has been the case in the past few weeks, there was a new Steelers’ defensive jersey on the field in Sunday’s win against the Cincinnati Bengals. Today was Antoine Brooks Jr.’s debut, logging his first defensive snaps. After the game, Mike Tomlin explained the uptick in snaps for Marcus Allen along with choosing to use Brooks.

“We’re just being challenged by player availability,” Tomlin said after the team’s 36-10 win. “We’ve got some young guys that are working hard every day. Earning an opportunity to play and play defense. Guys like Marcus Allen and Antoine Brooks are working their tails off every day.”

Brooks and Allen predominantly played in dime packages, though Brooks saw action in “big nickel” work too. Our defensive charting later in the week will detail the specifics. Brooks finished the day with two tackles while Allen recorded one.

Allen’s inclusion in the defense isn’t brand new, though his snap count was higher than past weeks, in part due to the Steelers holding a strong lead throughout. He was replaced in dime packages late in the game versus the Dallas Cowboys for Robert Spillane, calling into question his role going forward. But the team turned back to Allen today and he seemed to play reasonably well without any noticeable errors.

Brooks’ inclusion into the defense came at Justin Layne’s expense. In the first three games without Mike Hilton, Layne worked as the 6th defensive back. He played RCB with Steven Nelson kicking to the slot. Today, Brooks played a slot role with Nelson staying at his RCB home. Layne had struggled the past few weeks, struggling to communicate and blowing at least one coverage versus Baltimore, and was relegated to just special teams duty until seeing mop-up snaps late.

While they were relatively new faces to the defense, especially Brooks, Tomlin stressed the opportunity was earned, not given.

“We don’t fear giving them an opportunity to play. Provided they earn it. And those guys have earned it with work during the course of the week.”

Pittsburgh had a much easier and cleaner division of label to begin the year. Devin Bush was the every down play in dime packages with Cam Sutton being the 6th DB. Losing Bush, Mike Hilton, and Ulysees Gilbert III have changed plans. Hilton should return sooner than later, almost certainly sending Brooks back to the bench, but giving the Steelers some battle-tested depth.

“I know getting Mike Hilton back and having Antoine Brooks with some experience that he gained tonight is not a bad thing for us.”