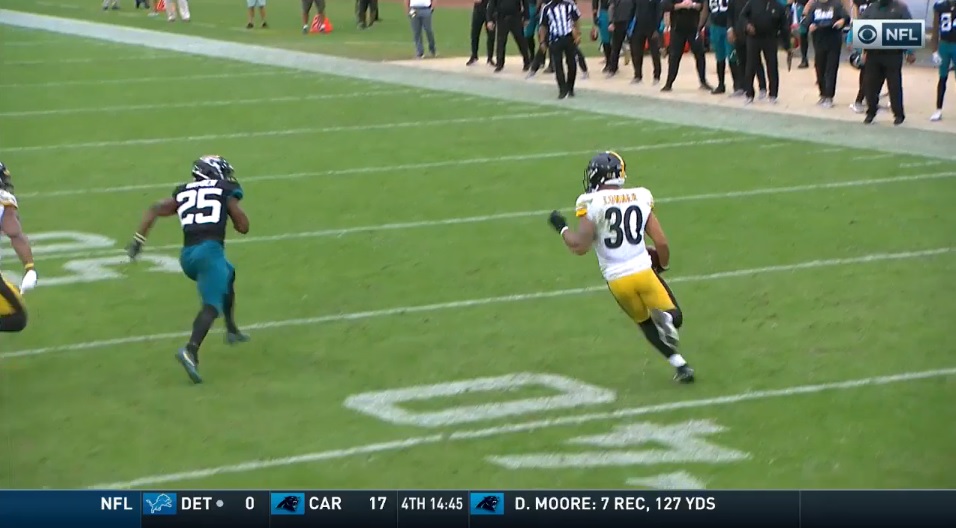 The Pittsburgh Steelers’ run game was far from perfect Sunday. But it was better than it’d been and at the least, a first step in a positive direction. That’s essentially how Mike Tomlin summed things up in his Monday press conference. In particular, he praised the group’s ability to succeed in short-yardage moments.

[We were able to ] win some short-yard circumstances that allowed us to maintain possession of the ball,” Tomlin told reporters. “Third and one, fourth and one, we were able to do those via the run. Those things don’t necessarily turn up in terms of time of possession. But the extension of drives, the maintaining the possession of the ball on one yard runs one and-a-half yard runs is significant, We had a goal line run for a touchdown. Benny Snell was significant. And in the two things I just mentioned, short yardage and goal line, like his contributions.”

The Steelers finished the day with over 100 yards on 27 carries. An average of 3.9 yards per carry. Far from ideal but also a far cry from the last month, where the team averaged under three yards a pop. Take away a couple of Mason Rudolph kneeldowns and that figure improves to a much healthier 4.6 yards per tote. If Pittsburgh can hover around that number the rest of the season, the run game will come back to life.

But as Tomlin pointed out, the effectiveness was more about average. It was situational. Pittsburgh ran the ball on a 3rd and 1 and 4th and 1 Sunday. Each time, they converted. Benny Snell picked up a 3rd and 1 conversion while James Conner bounced a run right side for 17 on a 4th and 1 gamble in Pittsburgh territory. Neither of those conversions ended up resulting in points, Jordan Berry was forced to punt each time, but they helped flip the field. Jacksonville started from their 20 at the end of both of those drives, forcing a rookie QB to march downfield against one of the league’s top defenses.

Snell also bulldozed his way into the end zone from one yard out for a late first-half score, providing extra cushion heading into the break. All areas of the game Pittsburgh had struggled with over the last month. To the point where their 3rd and 6-10 offense was about as successful as their 3rd and 1-2 offense, numbers that should never match up.

Pittsburgh doesn’t need a stellar run game the rest of the season the way that say, the Baltimore Ravens do. All the Steelers need is a run game that is successful at a reasonable rate, I’ll take even 45%, while converting in short-yardage and goal-to-go moments. In other words, what happened yesterday. Maybe with better blocking up front, Conner had to create too much on his own, but the general principle is the same. Make the run game a worthwhile complement to the pass game and the Steelers will be hard to beat, as ten teams have found out so far.