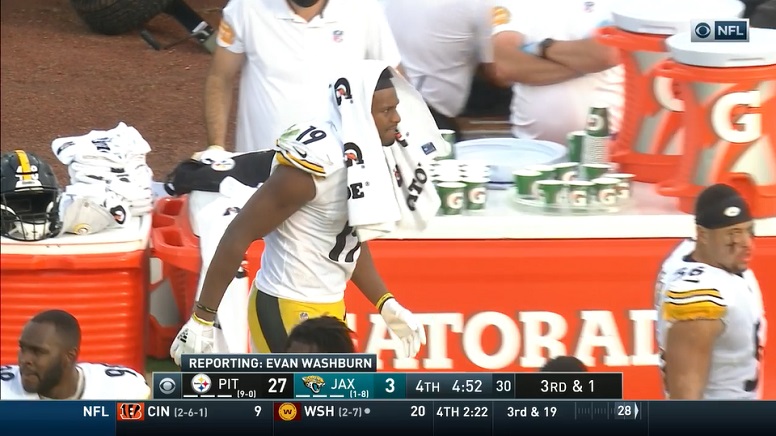 The Pittsburgh Steelers are now 10-0 after beating the Jacksonville Jaguars 27-3 on the road Sunday but they did suffer a few injuries during the contest. Steelers head coach Mike Tomlin addressed the health of the team after the game.

“On the injury front, Zach Gentry had a significant knee injury in-game,” Tomlin said. “I’ll have a update on that I’m sure for you tomorrow. All the others were minor bumps and bruises associated with play. Even Joe Haden, he was able to go back into the game after he sustained an injury. But with bumps and bruises on a short week, man, we’re not taking anything for granted. So, we’ll assess those and update you guys appropriately and put together a plan that’s focused on the healthy guys.”

It’s obvious that tight end Zach Gentry will now likely miss a lot of time and possibly the rest of the season with his injury. The Steelers were already short one tight end on Sunday with Vance McDonald still on the Reserve/COVID-19 list. Tomlin had no update on McDonald after the game.

Steelers cornerback Joe Haden (undisclosed) and wide receiver JuJu Smith-Schuster (toe) were both injured during Sunday’s game and didn’t finish the contest. Tomlin didn’t sound too worried about either player long term, so we’ll have to see if either winds up missing the Thursday night game against the Baltimore Ravens just the same.

“Yeah, but I don’t think there’s anything major and that’s why I just associated with the bumps and bruises associated with play,” Tomlin said of Smith-Schuster’s status after the game on Sunday. “Again, you know, it could be a factor for him. It could be a factor for others when we’re dealing on a short week. I’ll update you guys as soon as I can when we get back at the top of the week.”

The Steelers had three players miss Sunday’s game with injuries or ailments and they were running back Jaylen Samuels (quadricep), running back Trey Edmunds (hamstring) and outside linebacker Jayrone Elliott (illness). Guard Kevin Dotson, like McDonald, is still on the COVID-19 list.