The Pittsburgh Steelers have now released their fourth official injury report of Week 12 ahead of their Sunday home game against the Baltimore Ravens and the Thursday offering, which is an estimated one, is identical to the one the team released on Wednesday.

Listed as not likely to practice on Thursday had the team worked on Thanksgiving are running back Trey Edmunds (hamstring) and running back Jaylen Samuels (quadricep). The Steelers placed Edmunds on the team’s Reserve/Injured list after the Thursday report was released so he is now out for Sunday. As for Samuels, we’ll see what Friday holds for him, but it certainly seems like he’ll miss the Sunday game against the Ravens as we sit here today.

Had the Steelers practiced on Thursday, cornerback Joe Haden (knee) would have likely been limited, according to the team’s latest injury report released on Thanksgiving. Haden was listed as limited on the Wednesday injury report as well.

The Steelers are expected to resume practice on Friday. When they do, Haden is probably the player to watch the most. The few extra days provided by the Steelers game against the Ravens being moved to Sunday will likely help his cause. 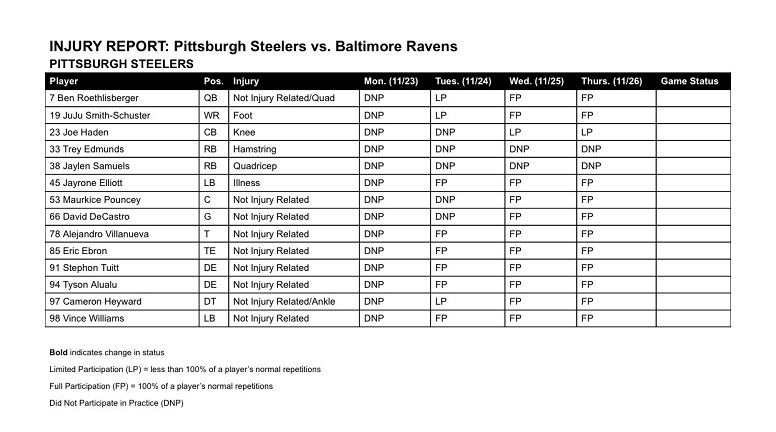