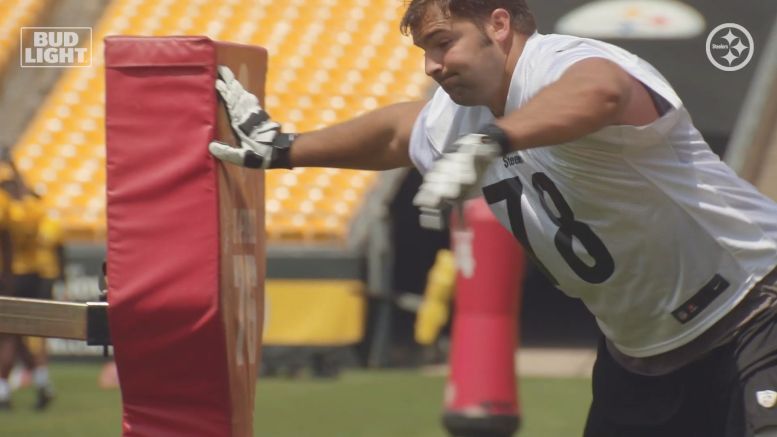 The old saying goes, the best ability is availability. Few players have been available like Alejandro Villanueva has over his NFL career. Since taking over as the team’s starting LT mid-way through the 2015 season, he hasn’t missed a single start. In a rare appearance with reporters, o-line coach Shaun Sarrett praised Villanueva’s toughness and desire to play.

“He’s the kind of guy that takes pride in his game,” Sarrett told the media Wednesday, per a transcript provided by the team. “He’s locked in on Sundays. There were a couple of games earlier in the year where we got up by some scores and stuff, and he didn’t want to come out of the game. We had an opportunity to play some younger guys. He wanted to continue to play. He’s a true professional. He wants to go out and give it his all every week, and I think he’s done a great job of that.”

VIllanueva has logged every single snap at left tackle this season. the only Steelers’ linemen who can make that claim. Matt Feiler is second, missing just three snaps this year. In fact, Villanueva and Minkah Fitzpatrick are the only two Steelers to play every single snap on their side of the ball.

Villanueva has proven to be one of the Steelers’ ironmen. Here are the number of snaps he’s missed since 2016, the year he began as the team’s starting left tackle.

30 snaps in four seasons, all in 2017. Seven of those came at the end of a blowout victory in a win over the Houston Texans. As Sarrett alluded to, Villanueva had a chance to exit the game in the Steelers’ big wins this year, chiefly their 38-7 drubbing of the Browns, but Villanueva chose to stay in the game and keep his snap streak alive.

Of course, that long of a snap streak doesn’t mean Villanueva played injury-free. Offensive linemen get as beat up as anyone. In fact, Villanueva was visibly shaken up in a recent game but remained in it. He’s gone on to play some the best football of his career, not allowing a single sack in the first eight games of 2020, according to our charting.

The only downside is this may be his last year with the Steelers. A free agent after the season, he won’t take a discount the way he did on his previous contract extension. He deserves and will get paid like a top tackle in football. That may mean playing for another team.