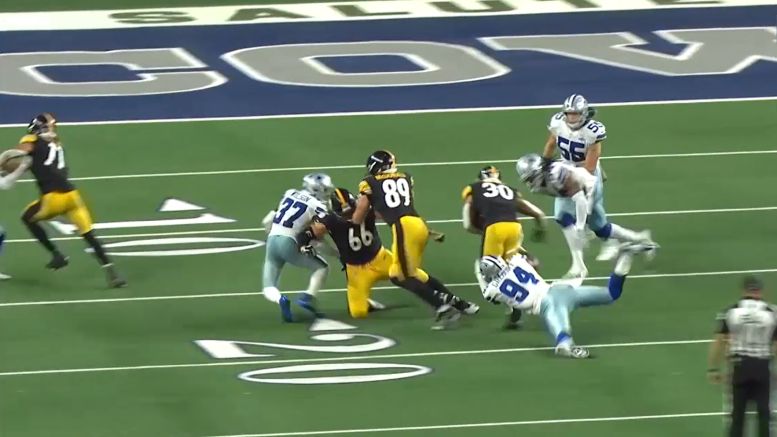 The Pittsburgh Steelers were an adequate-at-worst team in performing in short-yardage situations for the better part of the season; however, this is an area in which they have struggled heavily in recent weeks. While they are helping to allow the highest percentage of clean dropbacks in the league in 2020, there has been a lapse in the run-blocking department, particularly in situational football.

Offensive line coach Shaun Sarrett was asked about these recent failures—they were twice stopped on 4th and 1 by the Dallas Cowboys, including on their final offensive play, which would have ended the game—and he did not shy away from the question.

“They’re spinning at the bit. They know it”, he said about the mood in the offensive line room in terms of understanding that they need to get better in this phase. “It starts at the top. We were below par on all of it. That’s something these guys take great pride in and the coaches take great pride in, you know”.

“We’re the same way”, he added, as coaches. “We’re just going to keep working at it. We’re going to make it better. We have to get better at it. They know we have to get better at it. The players know. They spend as much time watching film as anybody else. It’s just one of those deals. Like you just said, gelling early. It happens sometimes. We just have to keep working”.

The Steelers haven’t necessarily ever been a top-flight run-blocking team over the course of the past decade—their skill set always leaned more toward pass protection, which is the more crucial phase of the game more and more as the years go by—but you need to be able to run the ball when the ball needs to be run, plain and simple. We saw that in Dallas.

Next up on the schedule is the Cincinnati Bengals. Statistically, they are one of the worst teams in the league in terms of run defense, having allowed 1140 yards on the ground at 5.2 yards per attempt. But the Cowboys were also among the worst run defenses in the league.

When you look back at the tape, so much of it did come down to the blocking. There were a number of runs in which there was little James Conner could have done. There might have been a couple of holes that he missed, but by and large, it’s up to the men up front to do more.

The Steelers had four 100-yard rushing games in the first five weeks. They have been under 100 rushing yards in each game since then. In fact, they have been under 50 yards in the past two weeks, the game in which their short-yardage failures have taken a new level of concern. There must be a turning point.