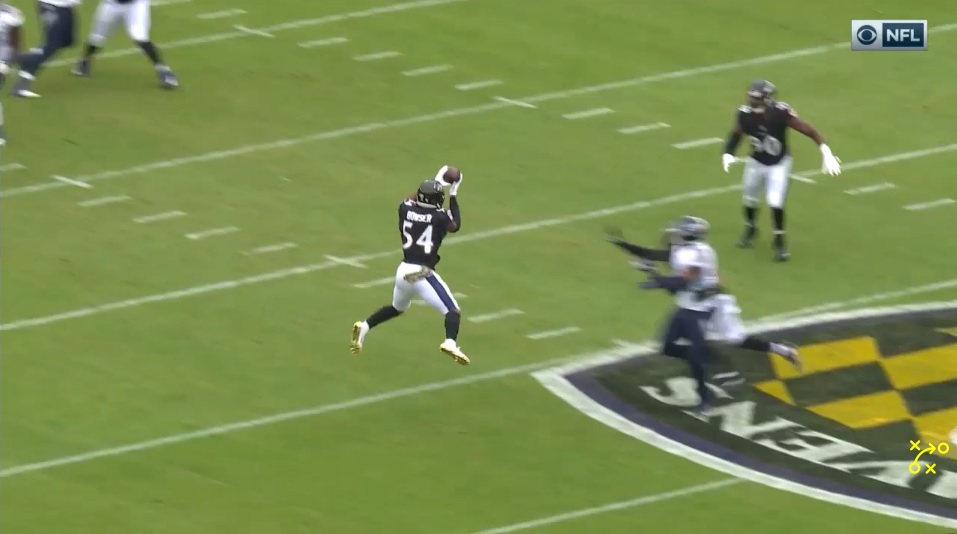 Today, circling back to the Baltimore Ravens’ defense (assuming the game gets played which…you know, isn’t looking too hot right about now).

Baltimore’s run defense hasn’t been terrible but it could be in a tough spot for Sunday’s game. NT Brandon Williams’ status is unclear but the team may be without him, DE Calais Campbell, and DE Derek Wolfe. Three key cogs up front. Entering this game, they’re allowing 4.6 YPC (tied 23rd in the league) and looked downright soft in last week’s OT loss to the Titans. Derrick Henry ran for well over 100 on them including the game winning TD. Baltimore traditionally has a stout front but they’re not as strong as years past.

They’ve allowed 30 runs of 10+ yards, slightly above average in football. But they’re the worst – and this stat shocked me – in 20+ runs given up. Eleven of them through their first ten games. Chance for Pittsburgh to chunk them.

One change from the first matchup is how much first round rookie LB Patrick Queen is playing. He leads the team with 70 total tackles. He’s played 84%+ of the defense’s snaps over the last five games. Compare that to never playing 84% of the snaps over his first five. Tom touches on Queen a little more below but his play has improved. Quicker reaction and staying cleaner in the run game.

Also respect how well their DBs play the run. Especially CB Marlon Humphrey. He has 53 tackles this season, fifth most of any CB in football. Watch him fly off the edge here to drop Derrick Henry for a five yard loss. Not too many CBs able (or willing) to make this kind of play.

Some other defensive stats. Third best scoring defense in the league, allowing just 19.5 per game. Waned as of late, allowing 20+ in three of four. It’s a very tough group on third down. Third lowest conversion rate at 34.5%. Chalk that up to DC Wink Martindale’s ability to confuse and disguise. They have struggled in the red zone though, allowing TDs 69.2% of the time. That’s 25th overall. Overall, this is a ball-hawking defense that has 15 takeaways in 2020. Tied for 7th most in football. Only five interceptions too so they’re punching the ball out a lot. Ball security always key but even moreso versus this bunch.

Some of their sack numbers have fallen off. Just 27 this year, tied for 8th most in football. But their pressure rate is top five and no team blitzes more than the Ravens. 44.8% of the time, edging out Pittsburgh (41.9%) for top spot in the league. Fourteen different Ravens have at least a half-sack this season. Matthew Judon (ejected from the first Steelers/Ravens game) and Campbell are tied for the team lead with four.

Humphrey and Marcus Peters are ballhawks at CB. Combined, they have four of the team’s five INTs. They also have seven total forced fumbles. Humphrey with four, Peters with three. As a team, they have 18 forced fumbles and recovered ten of them. That’s tops in football.

This secondary doesn’t allow many explosive plays. Just 24 of 20+ yards, second in the NFL. And only four of 40+, tied for 6th fewest of any defense.

Schematically, it’s a man-heavy defense. And why wouldn’t they be. They have the talent at corner to do it. Pittsburgh doesn’t run a ton of over routes (though they’ve hit used them to connect with JuJu on a handful of 3rd downs) but I love the way Baltimore ROBOTs them. Drive underneath to take the crosser away. Watch #24 in the first clip, #44 in the second.

Playaction can also be a weapon against this aggressive group. In the latter example vs the Titans, nice Y leak play to get Jonnu Smith open for the one yard score.

Facing the Ravens is never an easy task but on a short week at least they have familiarity on their side. It’s looking like the defense they faced four weeks ago will be slightly different on Thursday with some players coming back from injury and as of right now two others being put on the Covid list. So let’s take a look at the players.

Calais Campbell is the most versatile and disruptive player on this defense and he has missed the last two games with a calf injury. If he plays he’ll play primarily at the 3T but can line up all along the defensive line, can rush the passer in different ways and is strong against the run. Justin Ellis has gotten a lot of snaps the last two weeks versus two running teams with his strengths coming against the run.  He’s a high motor player who will pursue every play and gets his hands up in passing lanes. Derek Wolfe is a very good run defender and has 13 of his 31 tackles the last two weeks. He has strength and uses his hands well to stack and shed blockers.

Rookie Justin Madubuike has been getting consistent reps since week 5 and has performed well.  He uses good leverage verses double teams, has strong hands and quickness to shoot gaps also. Fellow rookie Broderick Washington didn’t play in the first meeting and has versatility to play inside or outside has a good motor and good athleticism. Brandon Williams was out last week (ankle) will miss this week as well on the Covid list. They have a rookie free agent Aaron Crawford on the practice squad and his college coach described him as strong, physical with a high football IQ.

At linebacker the Ravens will use a lot of players but rookie Patrick Queen mans the middle with speed, good mental processing and is strong tackler with solid coverage skills including reading the QB in Zone. L.J. Fort missed two games (finger) is the WILL linebacker and plays downhill, is always around the ball and can cover RB’s out of the backfield. Yannick Ngakoue is the rush backer. He is a pure pass rusher with only one sack since coming to Baltimore. He can win with speed around the edge, uses his hands well but an offense can run the ball at him with success. Matthew Judon is the SAM linebacker has good quickness from the backside to chase down runners, uses his length well and rushes the passer with power.

Chris Board backs up Queen and is a good athlete with speed to chase sideline to sideline and they’ll use him in coverage situations. Malik Harrison has had his snap counts go up the last three weeks and processes the game well, fills gaps and takes on lead blockers in the run game with good burst. Tyus Bowser is an athletic pass rusher, likes to use speed on the edge and recorded an interception on Sunday. Jaylon Ferguson will get about twenty snaps in the rotation on the edge has strong hands, is improving against the run and has a solid bull rush. Pernell McPhee was put on the Covid list earlier this week and he will not play.

The Ravens use the two starting safeties and rarely any others. DeShon Elliot is the free safety and is a good communicator and strong tackler on the backend but willing to play in the box, fill lanes and can cover TE’s one on one.  Chuck Clark is the strong safety is a physical player and strong against the run, plays under control and is also a strong tackler. The two other safeties are primarily special team’s players. Jordan Richards has experience at both safety spots and Anthony Levine fits in the box and can be used to blitz.

The cornerbacks are a talented group across the board. Marcus Peters has very good ball skills leading the team in interceptions (3) and passes defensed (6). He is the left corner back often playing on the opponent’s best receiver. Jimmy Smith is primarily the right corner back and returned last week after missing the previous game (ankle). He’s a big, physical corner with good closing speed with versatility to move around the defense and help against the run.  Marlon Humphrey played outside with Smith out and is normally the nickel corner who is strong against the run.  He is a very good in Man coverage will blitz from the slot and will go for the ball after the catch. He has four forced fumbles this year. Injuries to their depth led to the Ravens signing veteran Tramon Williams. He played the slot versus New England and will be a backup with Smith returning. He was a little rusty in his first game back but he has a nose for the ball with 34 career picks. He will likely be used in Dime package situations.