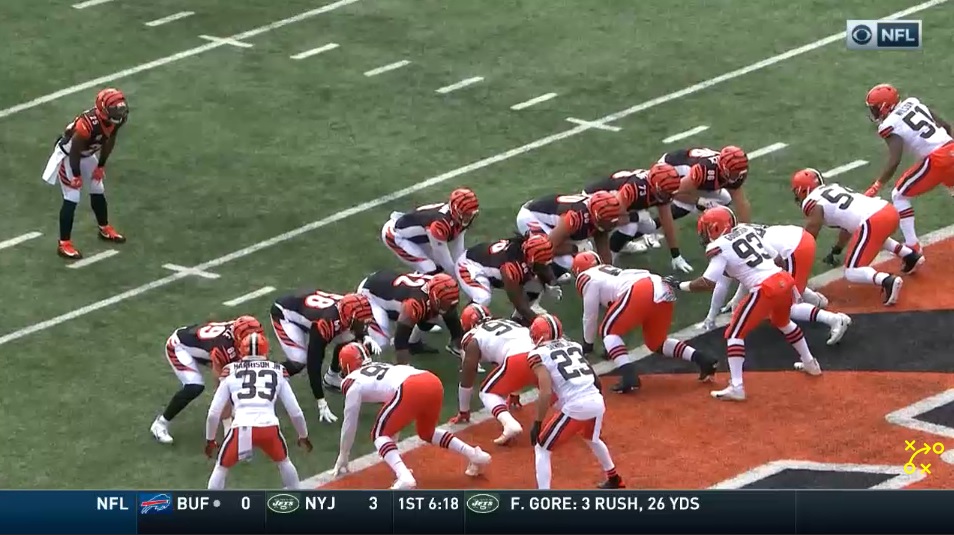 Here’s our analysis of the Cincinnati Bengals’ offense.

Clearly a unit missing Joe Mixon, sidelined the past few games due to a foot injury. As of this writing, his status for Sunday’s game is up in the air. Overall this year, the run game has been below average. 101 yards per game (23rd) and even worse on a per-carry basis, averaging 3.7 which is tied for 29th. They are finding the end zone a good bit with nine rushing scores, putting them in the top ten of football. But they’re not generating many explosive runs, ranking dead last in gains of 10+ yards. Only 16 of them through eight games.

For the year, Mixon and backup/current starter Gio Bernard are each averaging 3.6 YPC. For Mixon, it’s his worst average since his 3.5 mark his rookie season. Bernard’s “long” is just 12 yards on 40 carries so these guys aren’t making a lot of plays in the second and third levels. Worth pointing out the run game has featured receivers, just like it has in Pittsburgh. Their wideouts have 11 rushing attempts on the year led by Tee Higgins’ five. Those have come on designed jets and end arounds.

Schematically, the run game has a mix of man and zone. They have a couple of wrinkles in the run game. Check out these two examples of “fold blocks” where the RT wraps around the RG. The RG’s angle creates for an easy block while the RT has a runway to work to the second level.

You can watch some of their splits and tight end alignment to key the run too. If you see the TE off-set in sort of a wing position with a wider split between center and guard, expect an insert block from the TE with the back following behind. Like you see here.

Burrow is a threat with his legs with 35 rushing attempts and three rushing scores this season. He’s also sneaking on a Tom Brady-like level. In just the little bit I watched, he called his own number four times. He’s good at finding the bubble, the soft spot in the defense, even if that means rolling off tackle instead of falling up the middle. And he’s a big dude who can stretch ahead when he needs a yard.

Some other offensive stats. They’re averaging 24.3 points per game, 20th overall. But they’ve scored 20+ points in six of their eight games and 30+ in four of them. Had 13 or fewer in the other too. This is an offense finding its groove and putting up points, averaging 30.7 in their last three. Don’t underestimate them.

Led by the #1 pick of the 2020 NFL Draft, Joe Burrow. He’s having a strong year. Completing 67% of his passes with 11 TDs to just five interceptions. The line has done a poor job of protecting him and Burrow sometimes holds onto the ball too long. He’s been sacked 28 times this year, tied for 2nd most and only trailing the Eagles’ Carson Wentz. He’s been dropped at least once in seven of eight games (though he wasn’t sacked in his last game vs the titan). He’s been dropped 3+ times in five games this year.

He’s averaging 6.9 YPA, tied for 23rd in football, so the offense hasn’t been super vertical. That’s reflected in their just 20 completions of 20+ yards, tied for 26th in the league.

At receiver, things start with Tyler Boyd. He’s been healthy and available all season, which has helped his numbers, but is far and away the #1 receiver. 54 receptions this season. Next closest guy has 33. Boyd is the money guy on money downs. He has 17 catches on 3rd/4th down this season. That’s tied with JuJu Smith-Schuster for 5th most in the league. Boyd’s 15 first downs on those 17 grabs are third in the league, trailing only Keenan Allen and Davante Adams.

Since 2017, Boyd is tied for third with 70 catches on third/fourth down. And no receiver can match his 62 first downs.

Rookie receiver Tee Higgins has been an excellent surprise for them. Though not blessed with great speed, he has good size and averaging 14.8 yards per reception this year. That’s third of all rookie wideouts, only trailing the Vikings’ Justin Jefferson and Denver’s Jerry Jeudy. AJ Green has picked his game up too though he’s amounted to little more than a possession/back shoulder throw receiver.

Conceptually, Burrow has been given a seemingly unusual amount of freedom for the offense. They’ll run a ton of empty, RPOs. Certainly not afraid of letting him run the show. Dragon (slant/flat) out of empty is a common route combination, designed to get the ball out quick behind their patchwork o-line.

Here’s one concept we don’t talk a lot about either. Something pulled out of the Belichick playbook. Hoss Y Juke. Seam routes by the #2 with outs/screens by #1 mirrored to each side. Y receiver in the middle has an option/choice route. Here, it’s Tyler Boyd winning over the middle. Pats use to run this with Gronk all the time.

With that comes our first look at 2020 No. 1 overall pick, quarterback Joe Burrow, who has had quite the start to his NFL career in Cincinnati.

Burrow, who is fresh off of a historic season at LSU, has more than held his own in Cincinnati, giving the Bengals some hope and an offense loaded with talent some promise.

Burrow has been battered behind an offensive line that has had revolving doors at nearly every position, but he’s stood tall, made some terrific throws, and has really shown a ton of promise this year. He’s the real deal, in my opinion.

He’s just so calm and cool under pressure, has spectacular pocket awareness and never drops his eyes from downfield.

Third and long rarely bothers Burrow. He’s so confident in his arm and ball placement and has supreme confidence in his playmakers.

See what I mean? He’s so smooth and the ball placement is perfect here to wide receiver Mike Thomas. As things go crazy around him, Burrow works through his progressions and delivers a strike on third and long.

It certainly helps that Cincinnati has done a good job putting playmakers around Burrow early in his career. Quite frankly, I think this is one of the deepest wide receiver rooms in the entire league, highlighted by AJ Green and Tyler Boyd, as well as the impressive emergence of rookie Tee Higgins in the last few weeks.

Green has gotten healthy and is starting to make the most of his targets, while Boyd is the ever-reliable slot option. Higgins though, he’s come on so quickly and has really become a contested catch monster and a horse after the catch.

Guys that big shouldn’t move after the catch like Higgins, but he does. He reminds me a lot of former Steelers and New York Giants receiver Plaxico Burress and will be a handful on Sunday for a secondary that has had its struggles in recent weeks.

With Boyd, he’s an elite route runner and really knows how to use leverage and angles to defeat coverage.

He’s always so tough to deal with when the Steelers play the Bengals, and I expect more of the same on Sunday, especially with Mike Hilton trending in the wrong direction, health-wise.

Cincinnati will throw a lot of quick in-breaking and out-breaking routes to get the ball out of Burrow’s hands quickly. They’re not a team that will go deep a ton, but they have the horses on the outside to win contested catches, including little-used receiver Auden Tate, who is the biggest receiver on the roster.

In the backfield, running back Joe Mixon is likely going to miss Sunday’s game, but the Bengals shouldn’t be worried about that because running back Gio Bernard is that good.

I’ve always been a big believer in Bernard dating back to his rookie season out of North Carolina. I truly believe Bernard could have been a star elsewhere as the lead guy. Instead, he’s become one of the best No. 2 options in the league and has given the Bengals some great snaps in recent weeks.

It’s great design by Bengals head coach Zac Taylor, and then getting a convoy of that size in front of Bernard takes the cake. I expect Cincinnati to bust out a variety of screens on Sunday to slow Pittsburgh’s pass rush.

When not using Bernard in the passing game, the Bengals like to get him downhill on the ground, which is where he thrives. He’s provided the Bengals a different look out of shotgun because he doesn’t waste time in the backfield. Bernard puts his foot in the ground and gets downhill in a hurry and does a good job carrying his weight behind his pads at the end of runs.

This run against the Titans in Week 8 was perfect. He hits the whole right off the combo block and then is one Titans safety Kevin Byard so quickly that it’s an easy move to dance around him and waltz into the end zone.

Samaje Perine is likely going to be the short-yardage back for Cincinnati again this week. He’s a load who has fresh legs to work with.

Up front, it’s hard to project how the Bengals will line up left to right, considering the changing parts week to week. I’ll take a shot though:

I do think the Bengals would be wise to make sure rookie Hakeem Adeniji sees snaps on Sunday because he was darn good in his debut against the Titans. Spain might move back to the bench if Michael Jordan is healthy, but again, Spain was also good in the Bengals’ last game and should be a starter.

I am curious to see if BJ Finney is in the plans for Sunday now that he’s had time to clear COVID protocols and adjust to a new team.

On special teams, I really like the return duo in Brandon Wilson and Alex Erickson. Erickson is so steady as a punt returner and has had some success against the Steelers. Wilson is the special teams ace who is a home run threat every time he touches the rock on kick returns. He had a 49-yard kick return against the Titans two weeks ago.

In the kicking game, Randy Bullock remains steady as can be for the Bengals, while veteran punter Kevin Huber continues to punt the football well, averaging nearly 48 yards per punt this year. He also has the longest punt this season – a 70-yard bomb – at 35 years old.