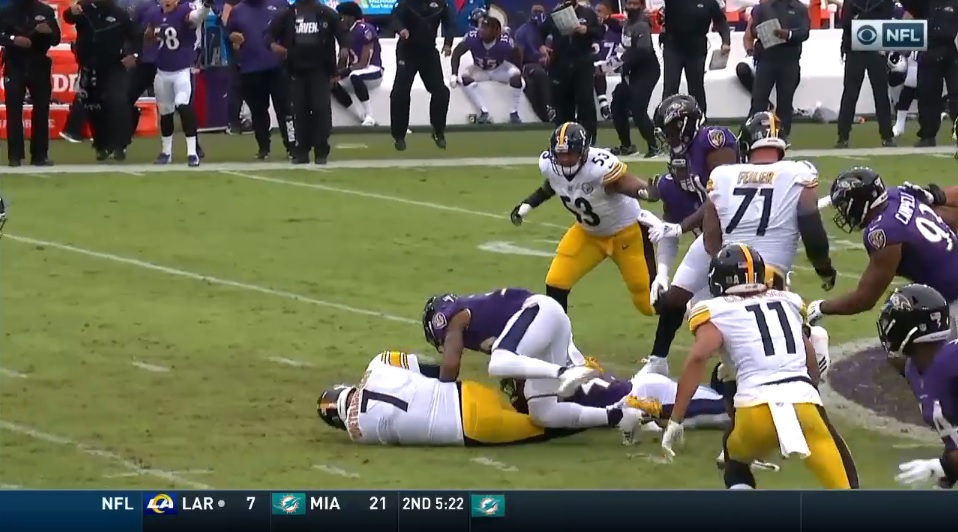 Taking a look at the pair of sacks allowed by the Pittsburgh Steelers in last Sunday’s win over the Baltimore Ravens. We’re also briefly recapping the penalties allowed two weeks ago against the Titans. We didn’t cover things last week since the team didn’t allow a sack.

I’ll admit it. This one is tough to figure out. Ravens show a heavy pre-snap blitz look. Don’t know who is coming or going. So Steelers go heavy protect with seven staying in; the five offensive linemen along with TE Eric Ebron and RB James Conner. Ben Roethlisberger making a lot of calls pre-snap to try and get the Steelers in a good position. 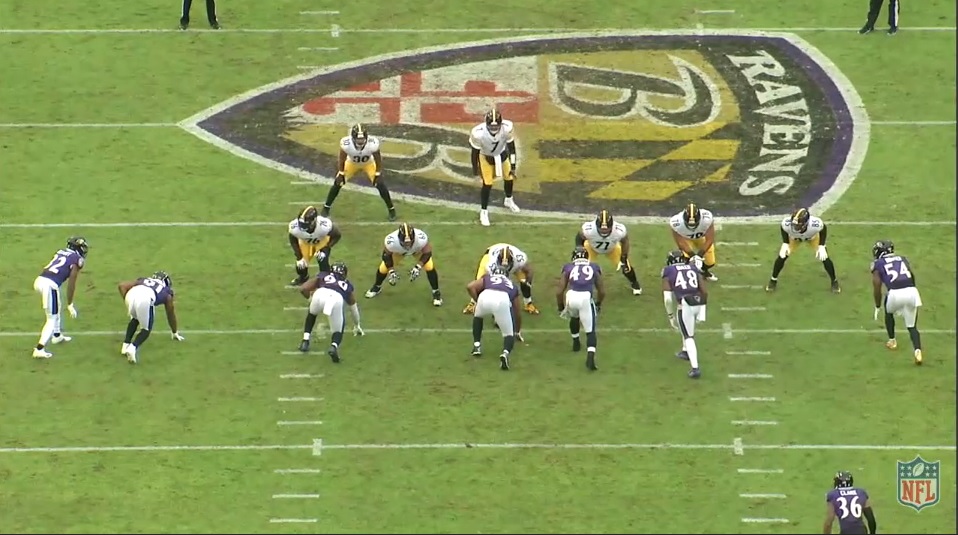 It’s a half slide with Maurkice Pouncey, David DeCastro, and Chukwuma Okorafor to the three man surface on the right (Ravens’ left) side. James Conner coming across to the left (Ravens’ right) with the rest of the Steelers’ blockers. 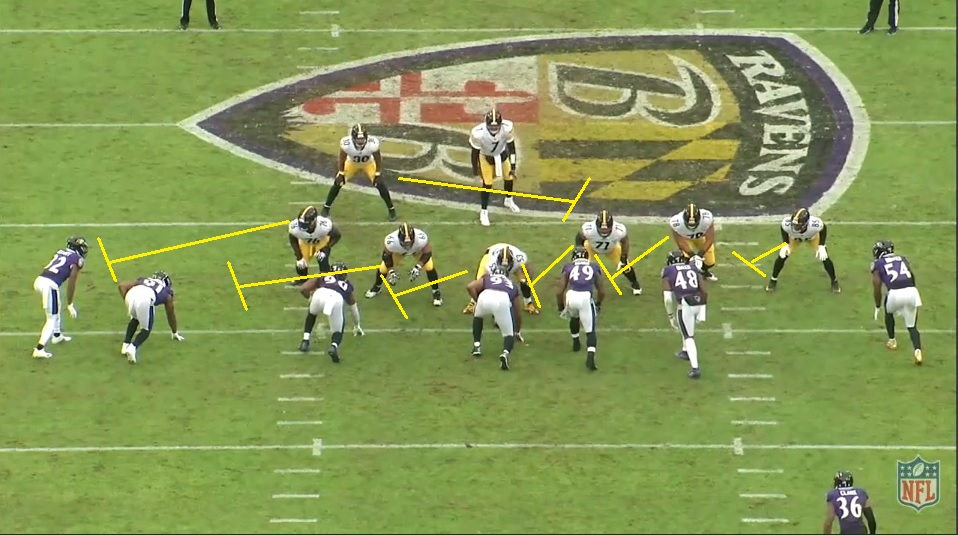 Ravens drop out on their right side and bring all three on their left. Maurkice Pouncey slides that way and gets eyes to pick it up but ILB Chris Board (#49), loops over to that side too, catching Pouncey’s eye as he works inside out/immediate threat. That leaves the Steelers half-slide side with three blockers for four rushers, leaving the DB free to go after Ben Roethlisberger. 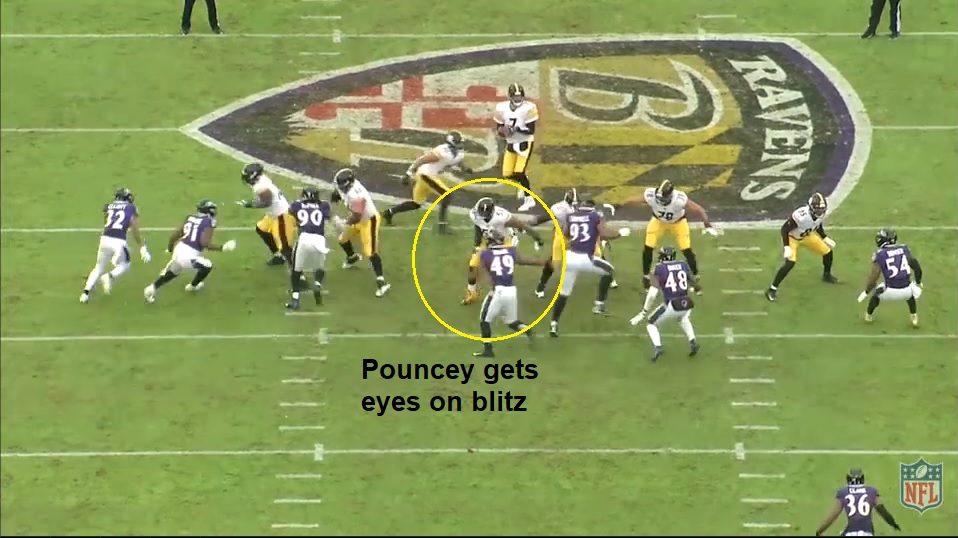 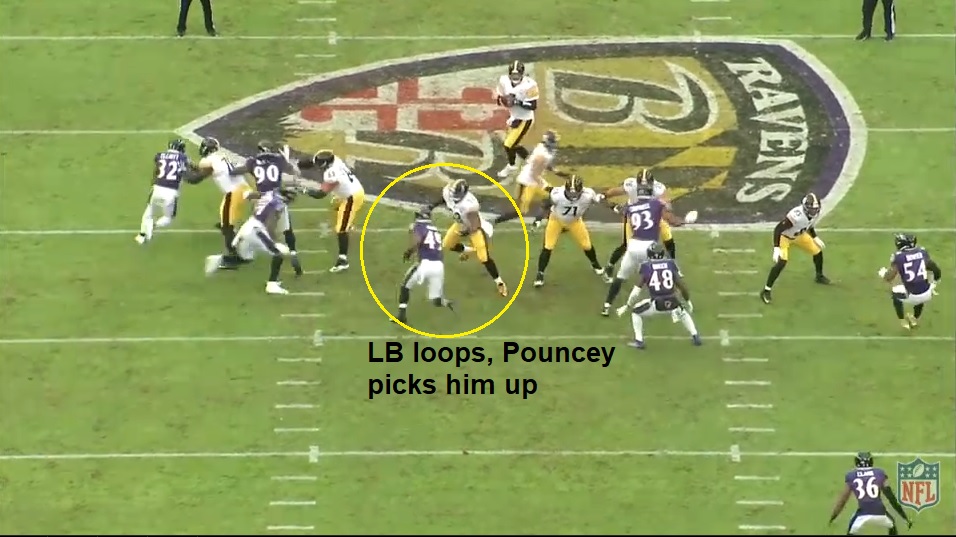 He doesn’t record the sack but causes a lot of chaos and Roethlisberger gets stripped sacked a moment later, luckily recovering the ball.

Who to blame here? Hard to say. Credit to the Ravens for dialing up one their great “safe” pressure schemes. Five man rush and get a defender free despite seven staying into block. I know this may look like Conner’s fault for sliding away from the blitz but I think Roethlisberger had Conner directed to that side. So it’s hard to blame him.

I’m loathe to assign these this way but this is just a great scheme by the Ravens. Sound blitz scheme that’s hard to defend because you don’t know who is coming or going.

Roethlisberger looking to hit Diontae Johnson on a deep out route here. But it’s played well by CB Marcus Peters, who jumps the route and forces Roethlisberger to pull the ball down.

In response, both #93 Calais Campbell and #45 Jaylon Ferguson to jump and try to bat the ball. That screws with RG David DeCastro and RT Chukwuma Okorafor, who have to adjust their block as those two Ravens come back down. DeCastro gets bullrushed back and Okorafor stops his feet and Ferguson gets past, bringing Roethlisberger down for the sack.

Roethlisberger did have some secondary options across the middle of the field with Johnson taken away. Some of the pressure may have caused him to escape to try to throw from a sounder base but he’s a little skittish here. I’m going to put half on Roethlisberger because he could’ve made a throw off his first read – to Eric Ebron in particular – and half on Okorafor for stopping his feet (guessing he thought the ball was out with Ferguson jumping) and not finishing the rep.

Neither of these sacks in this game though are very clear-cut and up for interpretation.

Blame: Half on Roethlisberger, half on Okorafor