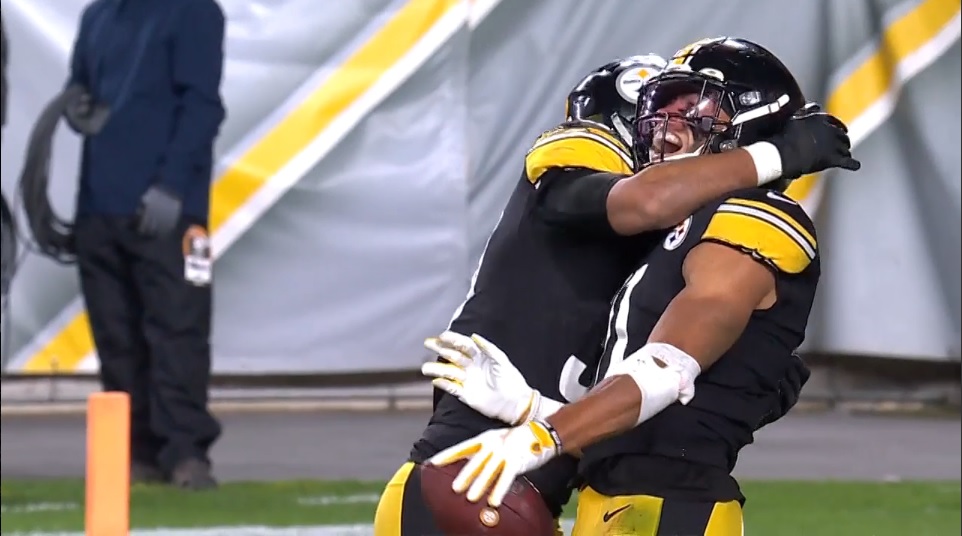 Claypool has really made his mark in the red zone adding two more touchdowns to bring his season total to nine with 6 coming inside the 20. He started out with a good block on a WR screen and was open on a deep pass that the wind took well out of bounds. He was involved in two end arounds with the first working well off a fly pass to Ray-Ray McCloud.  The second wasn’t blocked very well but he could have helped the blockers by slowing to let them get to the defender.

On the two point conversion play Ben Roethlisberger threw it to the pylon in the back of the end zone but it looked like Claypool was expecting a jump ball. A nice route pressing to the outside before cutting in drew a defensive pass interference penalty within the red zone.  His work on the scramble drill got him a chance in the end zone but the throw from Roethlisberger went off his hands.  The Bengals were ready for the jet sweep in the red zone and had 5 defenders in the flat where the Steelers only had two blockers.

Special teams had him on kick return and on the hands team but nothing stood out on those plays.

It was a quiet day on defense for Highsmith.  Rushing the passer was not successful. He’s showing inconsistent burst to get up field in his first three steps and twice he led with his shoulder making it easy for the right tackle.  They used him twice on loops to the inside on T-E stunts but neither was productive. On one rush he showed good quickness up field that forced the QB to step up that helped result in the Robert Spillane sack.

His lone tackle came against the run when he showed good effort to split two blockers and wrap and get the tackle for a loss.

Despite 27 special teams snaps there wasn’t a lot of good to report here either.  He, and just about everyone over the ball on punt return, need to work on sustaining their blocks a bit better.  On the fake punt he lacked effort and that was not good to see. It looked like he saw the play developing pretty early and made little effort to chase.

This clip is of pass rush with him not using his hands and it makes it easy for the right tackle to hand him.

Here is the fake punt. Highsmith (56) is lined over the left guard (87). He seems to see the play developing but fails to pull full effort into the chase. Sure he may not catch him with speed but if the runner cuts back there may be a chance to make play. Rookies need to show maximum effort especially on special teams.

Brooks made his defensive debut and was used quite a bit with the defense playing a lot of Dime defense. He was used as one of the slot corners mainly to cover tight ends or big slot WR’s like Auden Tate and was used in a variety of ways.  In coverage there was a lot of spot drop Zone but he was also used in Off Man and Trail Man coverage with safety help.

He was asked to blitz from the slot once and showed some aggressiveness to chase from the backside against the run and just missed tripping up the runner on one play. His first tackle was on a player coming from the far side of the field that he cut down and the second came after Joe Haden slipped off the WR. There was one pass his way that was incomplete on the sideline.

Solid defensive debut for him overall.

I like the effort by Brooks (25) coming from the left side trying to do his Mike Hilton imitation but just missed tripping up the runner.

I like Davis’ motor. He always seems to be working hard to get through blocks. He needs to improve his core strength and balance. He can get a little top heavy and when pushed from the side gets off balance. He did get one tackle and he displays solid lateral quickness with a rip with his right arm to get under the left guard and work down the line to make a tackle for a short gain.

Pierre made his debut on defense on the last drive playing all five snaps at the right corner position.  He aligned in Press Man coverage but all five plays were running plays to the far side.

On special teams he was the safety on the kick offs hanging back in case someone broke through. On punt return he does his best to be a thorn in the side of the gunner and used a basketball block a couple times to keep himself between the gunner and McCloud. As the gunner, he continues to impress being able to beat the blockers downfield. He used a hesitation to get the blocker off balance, used flat out speed to the inside to beat a double team and even won a rep with the blocker trying to pull him down from behind.  He did get a chance to rush the punter for, I believe, the first time and on the punt he downed at the three he used a slingshot to club the shoulder of the blocker as he cut to the inside that sent the blocker to the ground.