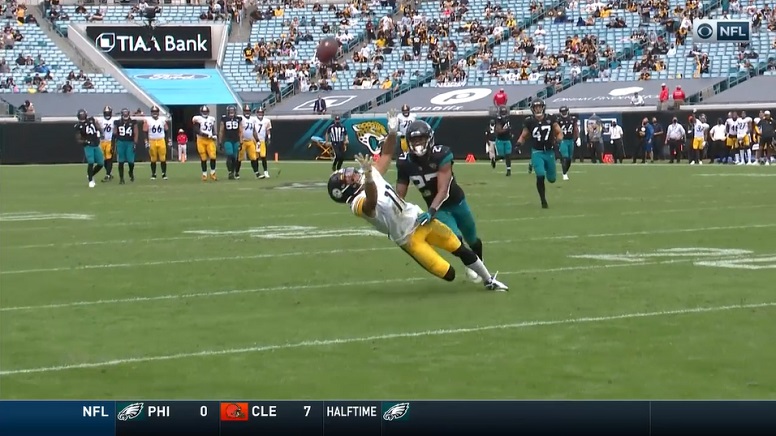 It’s been a great rookie season so far for Pittsburgh Steelers wide receiver Chase Claypool as the Notre Dame product already has 39 receptions for 559 yards and 8 touchdowns on the season, in addition to another 22 yards and two touchdowns on nine rush attempts. While Claypool only leads all rookies in touchdown receptions through Week 11 of the 2020 NFL season, he’s in the top five in both total receptions and receiving yardage. Claypool, however, also currently leads all players in the NFL in another under-the-radar statistic and that’s total yards gained via pass interference penalties. 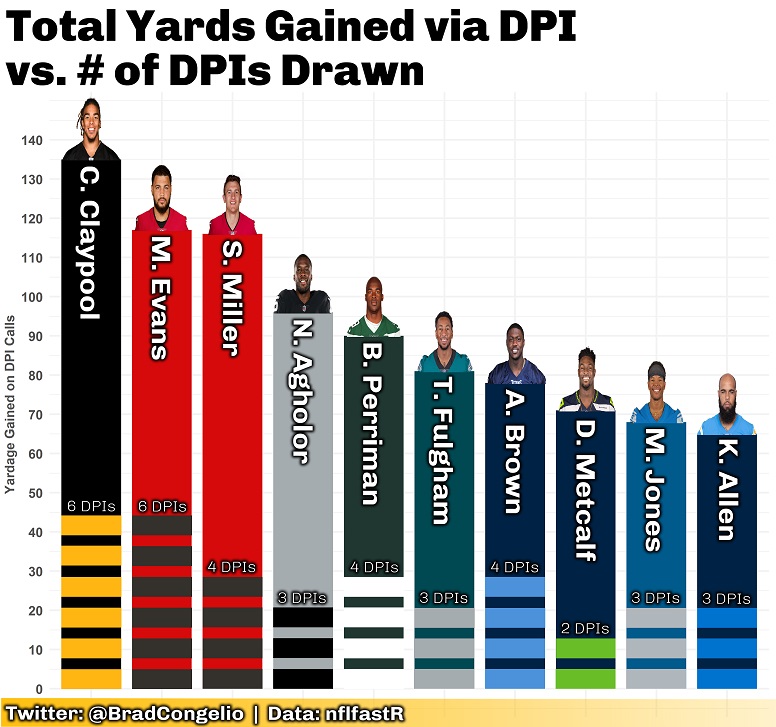 Steelers quarterback Ben Roethlisberger was asked after the team’s Sunday road game against the Jacksonville Jaguars about him throwing deep so often to Claypool this season and if the likelihood of the rookie wide receiver drawing chunk yardage reception or drawing a substantial pass interference penalty if he doesn’t is all part of the decision-making process to do so.

“Well, we’d rather have a touchdown, obviously, and I reiterate that to him, Roethlisberger said. “The penalty is nice, but we’ll take the touchdown. And he’s working through fighting through guys holding onto him, because he’s such a big body and strong and runs. And he’s understanding that you don’t want to just get the penalty, you want to try and get the touchdown, too. So, he’s going to keep growing in that area because he’s special down the field.”

On Monday, Claypool conducted a media session following him catching four passes for 59 yards and a touchdown against the Jaguars, in addition to drawing two pass interference penalties that totaled 50 yards. During that session, Claypool was asked about Roethlisberger’s postgame comments about the rookie wide receiver needing to potentially work a little harder at fighting through some pass interference against him and securing a few more catches for touchdowns.

“Yeah, he says that after every PI and so it definitely makes sense,” Claypool said. “And definitely it’s something that I’m trying to work on, just getting through some of those PI calls. But some of them, as you could see from yesterday’s game, you just can’t fight through a tackle sometimes.”

Thursday night, the Steelers will play the Baltimore Ravens again in Pittsburgh and their defense has already been penalized seven times for pass interference this season for 164 yards. Two of those seven pass interference penalties against the Ravens came in the Week 8 game against the Steelers in Baltimore with Claypool drawing one of them on cornerback Marlon Humphrey for 20 yards. In case you’re curious, Roethlisberger throws has drawn 13 pass interference penalties so far this season for 242 total yards. Only Buccaneers quarterback Tom Brady (16 for 297) has drawn more.

Including plays wiped out by penalties this season, Roethlisberger is averaging 8.2 deep pass attempts of 16 yards or longer a game with an average of 3.1 per game going to Claypool. In short, Claypool can expect another two or three deep passes from Roethlisberger against the Ravens on Thursday night and so more deep yardage, interference-drawn or otherwise, should be expected.

“So, I’m happy to know that he [Roethlisberger] can throw it up and it’s either a catch or a PI, other than that one that hit me in the face,” Claypool said on Monday.