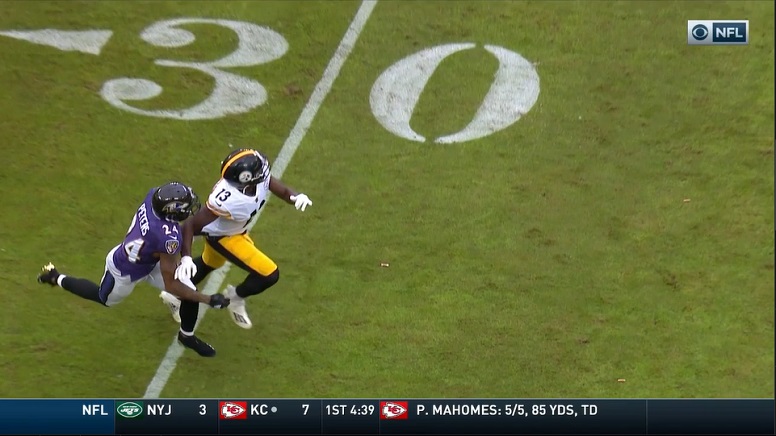 How did you enjoy the passing performance by Pittsburgh Steelers quarterback Ben Roethlisberger in the team’s 28-24 road win against the Baltimore Ravens? While Roethlisberger threw for just 182 yards against the Ravens in Sunday’s road win, he did throw two touchdown passes in the game and didn’t throw an interception. The other thing that Roethlisberger didn’t do on Sunday in Baltimore was complete a deep pass. Even so, his deep pass attempts did produce sizable passing yardage.

In total, Roethlisberger attempted seven deep passes against the Ravens, and he failed to complete any of them that flew more than 15 yards past the original line of scrimmage. Three of those deep pass incompletions, however, included pass interference being called on Ravens defenders in coverage. Those three penalties totaled out in 55 yards gained for the Steelers offense.

Two of the Steelers three offensive touchdowns that the Steelers scored against the Ravens came on drives that included a pass interference penalty being called on the Ravens defense. Two of the three penalties were 20 yards in distance and thus could technically qualify as being an explosive play.

In total the Steelers offense had just one natural explosive play on Sunday against the Ravens defense a short pass from Roethlisberger to wide receiver JuJu Smith-Schuster good for 24 yards to open the second half. That opening drive of the second half, however, stalled three plays later.

The only other play that gained 20 or more yards on Sunday for the Steelers came on a third-and-1 from the Pittsburgh 29-yard-line with 11:00 left in the fourth quarter. That play, a short pass over the middle to wide receiver Ray-Ray McCloud, was good for just 6 yards. However, Ravens cornerback Terrell Bonds was flagged for face-masking McCloud after the catch and the extra 15 yards assessed gave the Steelers offense a gain of 21 yards on that play.

While Roethlisberger has still yet to find his deep ball groove this season as he’s just 14 of 40 (35%) for 414 yards with 4 touchdowns and 3 interceptions on passes thrown more than 15 yards past the line of scrimmage through seven games played, he has additional hidden yardage to show for him airing it out. In total, and while not officially counted as pass attempts, Roethlisberger has had seven deep passes draw pass interference penalties to the tune of 141 yards being gained. That’s 20.1 yards per attempt on those seven pass attempts that failed to find their marks for whatever reason.

Yes, Roethlisberger needs to get his deep ball dialed in as the Steelers inch closer to the midway point of their 2020 season. In the meantime, however, at least some of his deep pass attempts that aren’t finding their targets, are at least producing the targeted yardage results.