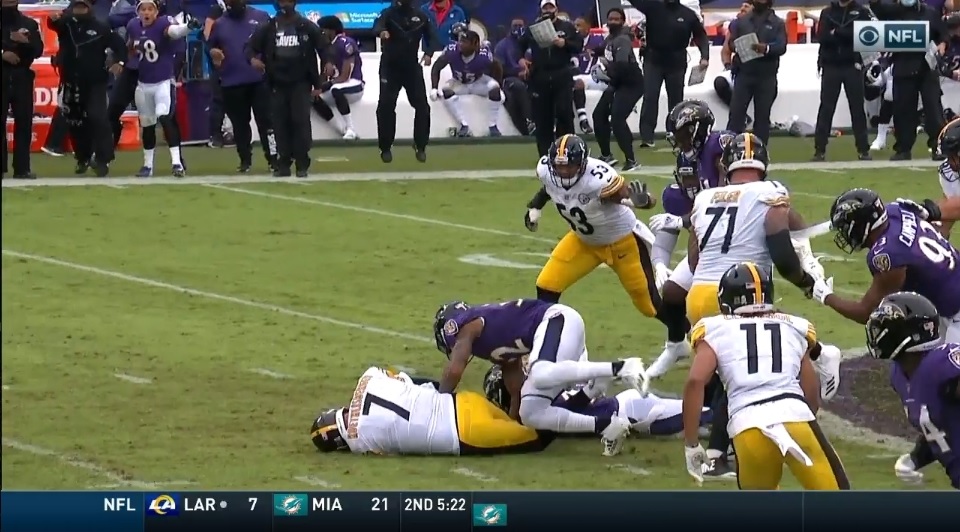 Saturday was Halloween but Sunday offered one more weekend scary moment. The CBS broadcast caught Steelers’ team doctor James Bradley checking on Ben Roethlisberger and his right elbow, the one surgically repaired last season, after getting sacked in the first half of Sunday’s win over the Baltimore Ravens.

After the game, Roethlisberger said his elbow is fine.

Roethlisberger was sacked on 3rd and 12 with just under five minutes to go in the half. He fell hard to the ground, losing control of the football but recovered his own fumble.

Doctors were seen massaging his elbow on the sideline but Roethlisberger never missed a snap and there wasn’t any serious indication of injury, despite the queasy sight of seeing medical professionals checking out his right arm. Roethlisberger was sacked twice by the Ravens but has only been taken down ten times in seven games, a remarkably low number. Credit goes to Roethlisberger for getting the ball out of his hand quickly and an offensive line that’s done a solid job in protection.

While the Steelers finally found a way to move the football in the second half, Roethlisberger credited the Ravens for making life difficult. Roethlisberger said he resorted to backyard football to get the job done.

“We were playing backyard football. I don’t know if we called too many quote-unquote plays in the second half when we were in that mode. It was more ‘run this, run this, run this.’ To me, that’s credit to the receivers and Ebron and the other guys who were able to make plays.”

Pittsburgh’s offense came alive in the third and fourth quarter of getting shut out in the first half. All 21 of their offensive points came in the second half. Roethlisberger didn’t end the day with gaudy numbers, he threw for just 182 yards but played some of his best football of the year in the second half and looked perfectly fine after his injury scare.