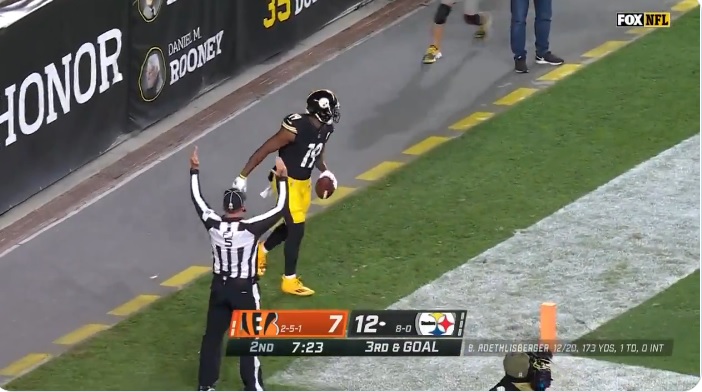 On an ugly day in Pittsburgh, the Pittsburgh Steelers offense scored early and often in their 36-10 win over the Cincinnati Bengals.

The Steelers first offensive possession stalled, but on the ensuing punt, Bengals returner Alex Erickson fumbled, and it was recovered by the Steelers, setting them up with a first down at the Bengals 32 yard line. However, the offense could not pick up a first down, and settled for a 41 yard Chris Boswell field goal.

Over the next three possessions, both teams would trade three and out punts.

The Steelers took over offensively with just just over 7 minutes left in the first quarter, set up by a great return. The offense would only pick up one first down on the drive, however, by way of a James Conner 16 yard run. The drive would stall once again inside the Bengals 30 yard line, leading to another Chris Boswell field goal. It put the Steelers up 6-0 with a few minutes left in the first quarter.

After the defense once again forces a three and out, the Steelers offense finally got things moving. Ben Roethlisberger finds Diontae Johnson for a 46 yard gain to put the Steelers just outside of the red zone. Two plays later, Big Ben connects with Johnson again for a 12 yard touchdown, putting the Steelers up 12-0 with just over two minutes left in the first quarter.

The Bengals would respond in the second quarter with a 90 yard drive, jumpstarted by a Joe Burrow 54 yard connection with Tee Higgins. Later in the drive, Burrow would find Higgins for a fourth and goal touchdown, to cut the lead to 12-7.

The offensive onslaught by the Steelers would continue on their next drive. Big Ben would connect with JuJu Smith-Schuster and Chase Claypool for big gains. Back to back penalties on the Bengals would set the Steelers offense into the redzone. A few plays later, Big Ben finds Smith-Schuster for an eight yard touchdown, putting them ahead 19-7 halfway through the second quarter.

The Steelers would add another field goal right before the half to extend their lead at halftime, 22-7. Both quarterbacks played well in the first half. Big Ben completed 17 of 27 passes, 243 yards and two touchdowns, while Joe Burrow completed 16 of 25 passes, 189 yards and one touchdown. TJ Watt recorded two first half sacks.

Both offenses got off to slow starts, as the Bengals were forced into two three and outs, and one from the Steelers.

Midway through the third, the Steelers offense would pick up where they left off in the first half. Third down conversions from Big Ben to Eric Ebron and Claypool would set the Steelers up in the red zone. A few plays later, Big Ben finds Claypool for an 11 yard touchdown. The Steelers took a 29-7 lead with four minutes left in the third quarter.

The lead would remain 29-7 into the fourth quarter. A big Ray-Ray McCloud return set the Steelers up in the red zone. A couple of plays later, Big Ben finds Claypool for a short touchdown, to extend the Steelers lead to 36-7 with just over 10 minutes left in the fourth.

The Bengals would add another field goal, but it wouldn’t matter as the Steelers moved to 9-0 for the first time in franchise history with their 36-10 win.

Big Ben threw for a season high 333 yards, and four touchdown throws. The Steelers defense got home for four sacks, including two from TJ Watt.

Rookie Joe Burrow was held on 300 yards passing and just his one lone touchdown on the day.

The Steelers will face the Jacksonville Jaguars next Sunday at 1 pm.