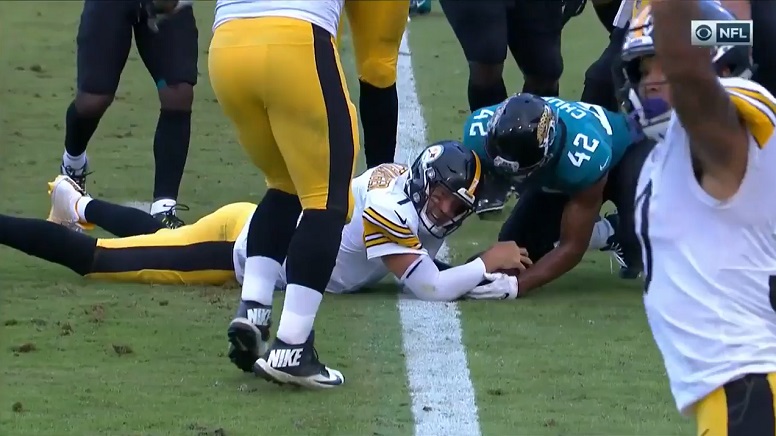 Are you worried about the 9-0 Pittsburgh Steelers and their upcoming Sunday road game against the 1-8 Jacksonville Jaguars? If so, that’s understandable. After all, the Steelers haven’t played overly great against the Jaguars in the history of the series, which has included quite a few of memorable losses for the Black and Gold. Steelers quarterback Ben Roethlisberger certainly can recall several games he’s played in the past against the Jaguars which is why he tried to make it clear on Wednesday that the team won’t be taking their one-win opponent lightly on Sunday in Jacksonville.

.@_BigBen7 spoke to the media about recent games against the Jaguars, motivation to win, the WRs, winning AFC Offensive Player of the Week and more.

“The last 10 games against them [the Jaguars] have not been good at all,” Roethlisberger said on Wednesday. “And so, extra motivation, whatever you want to call it, we’re not taking these guys lightly because they’ve had our number. I know we won the last one, barely, but they’ve come here. I know it’s different teams, so it’s nothing like that, but you have to understand this game and this group and these two guys against each other, and these two teams, it’s complete focus.”

Roethlisberger mentioned the last ten games against the Jaguars and I’m guessing he’s meaning the ten games he’s played in against them during his career. The last meeting between the two teams took place in Week 11 of the 2018 season at Heinz Field. That 2019 game, which the Steelers won 20-16, required Roethlisberger and the rest of the offense to overcome a 10-poimt deficit in the fourth quarter. Roethlisberger, by the way, scored the game-winning touchdown in that contest with just five seconds left. While he did throw two touchdown passes in that win, he also threw three interceptions.

Remember this winning TD by @_BigBen7 in 2018 against the Jaguars? #Steelers pic.twitter.com/9aExym1QsD

Prior to the 2018 meeting between the Steelers and Jaguars, Roethlisberger has played in nine other games against Jacksonville with two of those being playoff contests resulting in losses. Overall, and including those two playoff games, Roethlisberger is 5-5 against the Jaguars for his career and he was out injured for another Steelers loss to them in 2005, his second season in the NFL.

On the bright side, of the five games that Roethlisberger has played in against the Jaguars that the Steelers have won, four of those took place in Jacksonville, where Sunday’s game will take place. In those five games, he threw for 1258 yards with 8 touchdowns and 6 interceptions for a quarterback rating of 86.3. The lone loss, by the way, also came in a Monday night game.

“You look at the past history of this game, and it hasn’t been pretty for us,” Roethlisberger said Wednesday of the Jaguars. “We have yet to play a really good game against these guys. I’m
hungry to come out and get this game.”