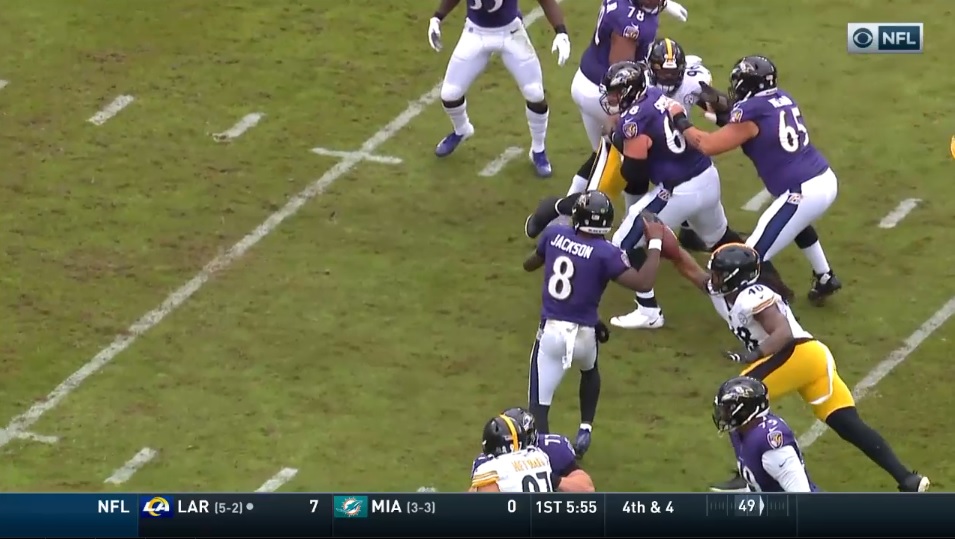 One week after being almost non-existent in the second half, the Pittsburgh Steelers made some halftime adjustments in Week 8 and picked up a huge 28-24 win on the road over the AFC North rival Baltimore Ravens, moving to 7-0 on the year.

It wasn’t very pretty overall, with the Steelers getting bludgeoned defensively, allowing 457 yards of total offense, including 265 on the ground. However, the defense stood tall when it mattered, forcing four turnovers in the four-point win.

Offensively, things started slow, but much like in Week 1, when the Steelers leaned heavily on Ben Roethlisberger to run the no-huddle attack, the Steelers’ offense woke up and did just enough to pull out the win.

It wasn’t Ben’s best game, but he made it counted when it mattered.

The first half was rather ugly for Roethlisberger, but in the second half when he started running the no-huddle attack things really opened up, especially over the middle as Roethlisberger clicked with Eric Ebron, JuJu Smith-Schuster and Chase Claypool, moving the Steelers down the field for scores.

A lot of short throws, a couple bat downs and a couple of questionable throws made up Roethlisberger’s say.

It wasn’t a great day overall for James Conner, but that was more on the lack of push up front more than anything. He ripped off a couple of good runs, but more often than not he was bottled up near the line of scrimmage for short runs.

As a receiver, Conner didn’t quite make the impact he normally does, aside from a 13-yard catch and run to set up a manageable third down.

Conner was pretty solid in pass protection though, picking up blitzers in the backfield to give Roethlisberger just enough time to get rid of the football.

Anthony McFarland was the only other back to get a touch on Sunday, stumbling for a 1-yard gain in poor conditions.

Another week, another strong game for Smith-Schuster, who finished with seven catches for 67 yards, most of which came in the second half.

Smith-Schuster was terrific over the middle of the field, providing tough yards against a physical Baltimore defense.

Chase Claypool bounced back from an early fumble and provided consistent play on the outside, including hauling in the eventual game-winning 8-yard touchdown, beating Chuck Clark to the sideline to catch a dart from Roethlisberger.

I was really disappointed in Diontae Johnson Sunday. He showed some poor body language throughout the game with the lack of targets and really seemed to let a non-PI call affect him for a series.

James Washington was held off the stats sheet too, which wasn’t really expected coming into the matchup.

Overall though, the Steelers got just enough from Smith-Schuster and Claypool to pull out the win.

Ebron is really becoming a go-to guy for Roethlisberger, especially in tough situations.

Ebron took advantage of a busted coverage by the Ravens to score from 18 yards out and made a number of tough catches over the middle of the field, finishing with 48 yards on four catches.

In the run game, Vance McDonald helped spring Conner for his 1-yard touchdown in the third quarter, but aside from that the tight ends were invisible in the run game.

I really thought the Steelers’ OL was punched in the mouth in the run game and never really responded to the Ravens’ physicality.

Maurkice Pouncey had a poor snap that rolled to Roethlisberger and really had his hands full up front with Calais Campbell and Brandon Williams.

Matt Feiler gave up a handful of pressures and looked overmatched at times in pass protection. He wasn’t much of a physical force when on the move in the run game either.

David DeCastro had a false start penalty, but aside from that I thought he was the best lineman on the day, while Alejandro Villanueva held up very well against the pass rush, providing Ben ample time.

I thought Chukwuma Okorafor was solid on Sunday as well, holding up well against the run for the most part.

I can’t wait to dive into the All-22 to see more with the offensive line.

Tuitt was all over the place on Sunday, dominating the run game and getting after Lamar Jackson in the passing game, dragging down the reigning MVP twice on the day, finishing second on the team with nine tackles.

When Tyson Alualu went out with a knee injury in the first half, there was a ton of concern with Isaiah Buggs and Henry Mondeaux taking over the bulk of the snaps.

Buggs was a force though, especially on pass reps, providing a ton of pressure up the middle on Jackson. He was a concern in the run game as he was overwhelmed at times with power right at him, but overall he turned in a strong performance.

Cam Heyward quietly had a strong game too, finishing with five tackles before exiting with an injury. Heyward really pushed the pocket at times and helped bottle up the run for stretches.

There were a lot of gaping holes in the run game though, so it will be interesting to see who was at fault.

I know that the Ravens rushed for 265 yards on Sunday, but my goodness the linebackers were really good, especially TJ Watt and Robert Spillane.

Spillane started off with a splash, picking off Jackson and racing 33 yards for a score just over a minute into the game. Spillane flew all over the field after that, leading the Steelers with 11 tackles, including a fumble recovery.

Watt was a wrecking ball, finished with five tackles, a sack, and five quarterback hits in the win, including getting a hand on Jackson’s second-to-last throw of the game.

Vince Williams and Bud Dupree were up and down on Sunday overall. Dupree lost contain a couple of times on Jackson, while Williams seemed to over scrape at times, leaving running lanes.

Aside from the top four, I thought Alex Highsmith was really solid. The rookie picked off Jackson on a great play, showing off some great hands. Highsmith also showed some serious physicality, blowing up lead blockers and providing some good reps on the field as the third linebacker.

The Steelers found a really good one with #56.

Aside from Devin Duvernay’s 39-yard catch over the middle, and a couple of splash plays from Willie Snead IV over the middle, I thought the Steelers’ defensive backs had a solid day, especially against play-action.

Joe Haden was terrific on Sunday, finished with seven stops. He was all over Ravens receivers on Sunday, playing a major part in holding Marquis Brown to one catch in the win.

Steven Nelson was rather quiet overall, but that’s usually a good thing for a cornerback. I’ll need the All-22 to show me more.

I was pleased with Cam Sutton overall filling in for Mike Hilton. Sutton forced a fumble on Mark Andrews on a chase down play, and for the most part filled lanes well against the run.

Minkah Fitzpatrick was good on Sunday, providing some serious back-end physicality. He made a couple of big plays down the field and broke up the final pass of the game to seal the win. I do wonder if Brown’s 3-yard touchdown was due to him late to rotate over as Watt vacated the zone to guard against Jackson rolling right.

Terrell Edmunds was fooled a couple of times on play action, one of which led to Duvernay’s big catch.

Additionally, that’s two straight weeks Justin Layne has been on the field as the boundary corner in crunch time. I thought Layne held up well again, driving on the ball to Snead IV late in the game that Fitzpatrick ultimately broke up.

Baltimore’s a very good special teams team, but I wasn’t overly impressed with Pittsburgh on Sunday.

Baltimore did a good job kicking away from Ray-Ray McCloud, and when they did give him a chance to return a punt, the Ravens bottled him up. Same goes for kickoffs.

The biggest disappointment on special teams was Jordan Berry. His first punt traveled 34 yards and gave the Ravens great field position, leading to a score.

After that, he bounced back slightly, finishing with a reasonable 42.2 yard average and pinned the Ravens inside the 20 twice. His final punt of the game was his best, traveling 56 yards, forcing the Ravens to start in their own territory after the Steelers were pinned deep in their own end.