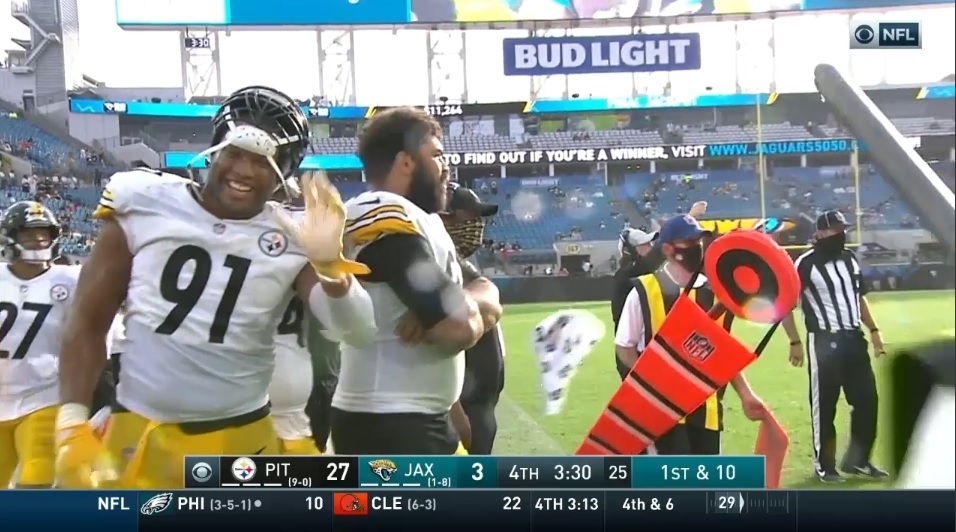 That’s just what the Pittsburgh Steelers are through 11 weeks following a dominant 27-3 win on the road over the Jacksonville Jaguars Sunday in the rain.

Ben Roethlisberger dialed up the deep ball for the second consecutive week, Diontae Johnson had a career game, the run game got back on track and Minkah Fitzpatrick and Terrell Edmunds turned the air in Duval into a No Fly Zone with two picks each, leading the Steelers to the 24-point win.

There’s still plenty of improvement to be made on both sides of the ball, but it was nice to see the Steelers cruise to another win over a below-average opponent, getting some backups into the game with a short week ahead.

Roethlisberger turned in another solid performance Sunday against the Jaguars, finishing with 32 completions for 267 yards and two touchdowns on the road, hooking up with rookie Chase Claypool and veteran tight end Eric Ebron for scores.

Roethlisberger also threw a key block on a James Conner run and made a nice play at the end of the half, tripping up Jacksonville’s Daniel Thomas on his interception return.

Overall, he took care of the football, was mostly accurate throughout the game and was much more accurate on his deep balls, giving his receivers a chance to make a play on the ball downfield, which led to Claypool’s touchdown and a pass interference call later in the game.

Conner bounced back in a big way Sunday, finished with nearly 6.2 yards per touch against the Jaguars, finishing with 89 yards on the ground.

He did a nice job creating on Sunday, forcing a handful of missed tackles and really ran hard throughout the game. Conner also had a 14-yard catch and run in the first half. When the offensive line works downhill like they did on Sunday, Conner can really get rolling.

Benny Snell Jr. scored a touchdown and did a great job overall in short yardage on Sunday, providing solid balance to the run game. He also helped close out the game on Sunday, running well with Mason Rudolph in the game.

Rookie Anthony McFarland continues to struggle overall on the ground, picking up just 3 yards on 3 carries. The game seems to be moving too fast for him at this point.

These guys made some terrific catches on Sunday and really made it difficult on the Jaguars’ secondary.

Johnson turned in a career game, finishing with 12 catches for 111 yards, including a spectacular juggling catch down the left sideline that set up Snell’s 1-yard touchdown. Johnson was targeted an impressive 16 times on Sunday.

JuJu Smith-Schuster was mostly quiet on Sunday, but he made some tough catches once again and battled through a knee injury, finishing with four catches for 19 yards. He was really solid as a blocker once again as well.

James Washington made a terrific catch on the left sideline for 12 yards – his only catch of the day – tapping both feet down to move the chains.

Claypool continues to be a magnificent find. Another four catches for 59 yards and a touchdown continues a great rookie season for him. He’s turning into a viable deep threat and a solid possession receiver.

Ray-Ray McCloud continues to get a ton of run too at receiver, finishing with four catches for 20 yards, including a great twisting 13-yard catch on the left sideline late in the second half to move the chains.

This is such a good group of receivers.

When Zach Gentry went down with an injury the Steelers were down to one tight end on the day.

Fortunately for them, Ebron was up to the task, finishing with four catches for 36 yards and a score, which came on another Bang 8 route for the 20-yard touchdown. That’s a route to watch as we move forward into December. Ebron hauled in a 24-yard pass one week ago on the Bang 8 route, which Troy Aikman and the Cowboys made famous in the 90s.

That’s a much, much better performance by the offensive line.

David DeCastro really opened some holes in the ground game, especially when on the move as the pulling lineman, while Alejandro Villanueva and Chukwuma Okorafor really stood tall against the Jags.

Maurkice Pouncey bounced back inside in the ground game and in pass protection, while Matt Feiler was serviceable on Sunday. Okorafor and Feiler picked up false start penalties on the day.

Another week, another strong performance from Tyson Alualu, Cameron Heyward and Stephon Tuitt.

Sure, Jacksonville started off fast on the ground with rookie James Robinson, but overall the defensive line mostly bottled up the run game. Tuitt and Heyward combined to sack Jake Luton in the second quarter, and Alualu batted a pass into the air in the red zone that Minkah Fitzpatrick picked off to keep the Jaguars off the board.

Bud Dupree and TJ Watt were phenomenal once again.

Dupree sacked Luton and hit him twice and nearly picked off a pass in coverage, while Watt wore right tackle Jawann Taylor like a hat, shout out to Dave Bryan for that one.

These guys really set the tone off the edge.

Inside, Vince Williams did a great job coming downhill against the run, slowing down Robinson. Robert Spillane was up and down, missing a tackle in space on Robinson that resulted in a 15-yard reception. He appeared slow to get off blocks against the run for the second straight week as well.

Alex Highsmith and Ola Adeniyi looked solid in relief again, combining for four stops in the second half.

Edmunds has been playing good football this year, and on Sunday in Jacksonville he had a breakout game, picking off Luton twice and really looked confident and comfortable in coverage.

It appears he’s taken the next step.

Fitzpatrick picked off two passes as well and broke up two passes in the win, continuing to take away a section of the field in pass coverage.

Aside from his silly personal foul penalty, I thought Steven Nelson was great on Sunday, breaking up a couple of passes. Sunday felt like the 2019 season for Nelson, where one side of the field was non-existent for the opponent through the air.

Joe Haden briefly exited the game with an injury, but overall he looked solid for the second straight week.

I was really impressed with Justin Layne and James Pierre late in the game. Pierre had a great tackle on a short pass, flying downhill for the stick, while Layne was around the ball a lot, forcing some incompletions.

Sean Davis got some run on Sunday as well and tackled well from TV tape.

Kam Canaday is really struggling with snaps right now. Not sure what’s going there, but he had a poor snap on Chris Boswell’s missed field goal on the first series of the game for the Steelers.

Boswell bounced back in the game with two more field goals, including one from 47 yards.

Jordan Berry punted the ball well for the most part once again, averaging nearly 44 yards per punt, including a long of 55. He downed the Jaguars inside their own 20 twice as well.

McCloud struggled to get much going on punt returns, averaging just 6.3 yards per punt return.

I was very envious of Logan Cooke on Sunday. He punted the life out of the football for the Jaguars, averaging 54 yards a kick, including a long of 67 yards. Some day I hope to have a weapon like that at punter.