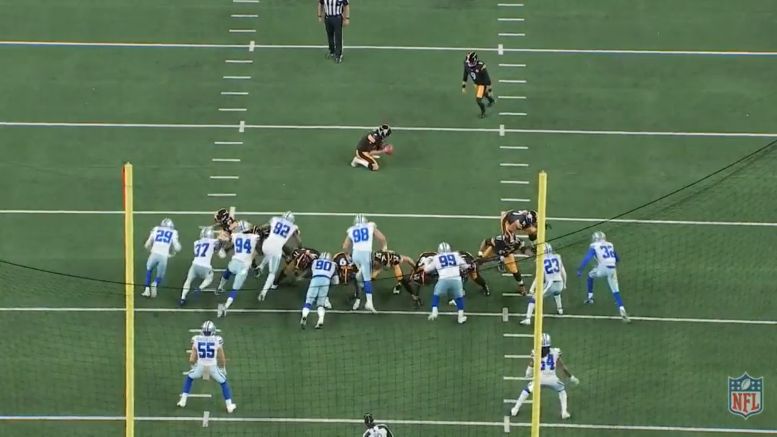 Following Sunday’s game, Pittsburgh Steelers head coach Mike Tomlin was asked why he passed over the chance to attempt a field goal on 4th and 1 from his own 22 that would have put his team up by eight points, instead attempting to convert the first down, which would have ended the game then and there.

He cited the Dallas Cowboys’ aggressive field goal blocking unit, which had already successfully blocked one extra point and had been getting good pressure up the middle throughout the evening—even on Chris Boswell’s franchise-record 59-yard field goal at the end of the first half.

During yesterday’s pre-game press conference Tim Benz asked Tomlin if the Cowboys were “skirting around the leaping rule”, which stipulates that players may not use the body of a teammate or opponent to gain leverage in an effort to block a kick. Tomlin would not engage in that line of thinking.

“They were flat getting after us in the teams game, not only in the block game, but they had a big punt return”, he said, which of course was factual. “They had a big kick return. They were a step ahead of us, and they were aggressive. You have to give them credit for that, and we will just get back in the lab and get back to work this week with the intentions of being better versus the Bengals”.

There is an argument to be made, however, that the Cowboys were indeed skirting around the leaping rule. Below is the rule as written, including all unsportsmanlike conduct penalties pertaining to kick attempts:

There shall be no unsportsmanlike conduct. This applies to any act which is contrary to the generally understood principles of sportsmanship. Such acts specifically include, among others:

Jumping or standing on a teammate or opponent to block or attempt to block an opponent’s kick or apparent kick.

Picking up a teammate to block or attempt to block an opponent’s kick or apparent kick.

The emphasis is, of course, mine. Now if we go back and look at the film, it is fairly evident to me that Tyrone Crawford, #98, places one hand on the backs of both long snapper Kameron Canaday and guard Kevin Dotson in and attempt to jump through the gap between them. After doing so, he proceeds to block the extra point. You can also see Dorance Armstrong, #92, using his right hand to leverage himself over Matt Feiler, who is lined up to Dotson’s right.

Crawford also does the same thing, although not quite as egregiously, on Boswell’s 49-yarder, only on the left side, leveraging over Kanaday and guard J.C. Hassenauer. Now, I have no idea how strictly the league has historically flagged this and what the threshold is for throwing a flag, but I can certainly see the argument that the Cowboys could have drawn an unsportsmanlike conduct penalty on at least the former play, and which could have potentially cooled down their rush on subsequent attempts for fear of drawing another infraction.