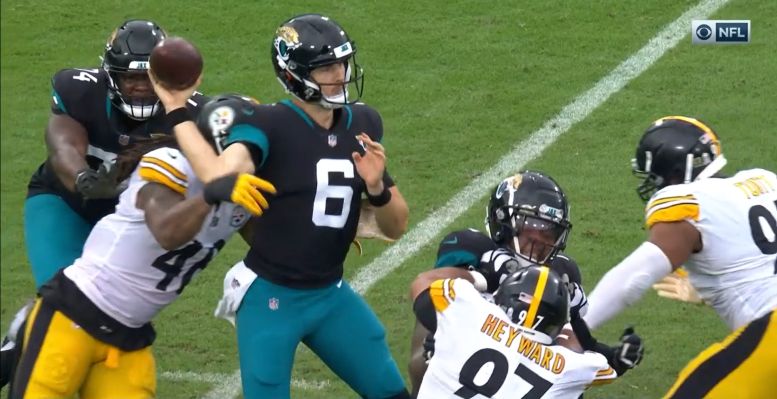 The Pittsburgh Steelers have played 10 games, and they have won 10 games. Granted, they also entered this season scheduled to play what was projected to be the easiest schedule in the NFL, but as they say, you can only beat the teams to play.

Seven of the 10 teams that they have defeated have losing records, and in fact I don’t believe any of them are particularly near .500. Their three games against teams with winning records, though, came all in a row, and with two of them on the road. They didn’t win those games easily, aside from the game against the Cleveland Browns, but they did win them.

Facing the 1-9 Jacksonville Jaguars today, Pittsburgh faced some skepticism as to whether or not they would ‘play down to the competition’, as some perceived that they had in previous games against the Dallas Cowboys, for example. Head coach Mike Tomlin was essentially asked after the game if he could take it easier against some teams, displaying more patience to trust that things would work out in their favor.

“This is the National Football League. We don’t anticipate rolling out of tunnels and people laying down for us”, he said. “These are going to be competitive games. I don’t even know if we have a ‘mentality’ where we’re anticipating [things would break our way in the long run]. We step out of tunnels ready for a 60-minute fight each and every week”.

The Jaguars are, of course, not only a mightily struggling team, but a mightily struggling team that is starting a rookie backup at quarterback. The Steelers smothered Jake Luton, holding him to just 16 of 37 passing for 151 yards, averaging 4.1 yards per pass attempt. While they only managed to sack him twice, he was frequently under pressure, and they were able to intercept him four times, leaving him with a passer rating of just 15.5.

A few weeks ago when facing quarterback Garrett Gilbert for the Cowboys, who was making his first NFL start, a couple of players after the game acknowledged that they needed some time basically to scout him while the game was going on.

Likely because of that, Tomlin was asked a question along those lines regarding Luton, who has also started the previous two games. In so many words, he said that that is not the approach that they take. “We just have an ‘unleash’ mentality regardless of who we play”.

The Steelers entered the day leading the NFL by four with 36 sacks on the season, and with the second-place Tampa Bay Buccaneers having already played 10 games (they have a wee 13 bye). They only added two sacks today to reach 38, but as of this writing, they still have a four-sack lead, with the Philadelphia Eagles retaking second place a 34. The Los Angeles Rams, who play the Buccaneers tomorrow night, are in fourth with 31.