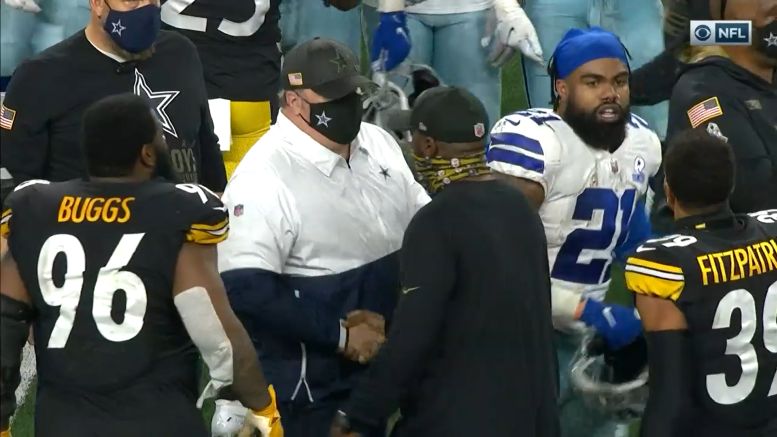 The Pittsburgh Steelers entered today’s game with the fourth-best points differential on the season in the NFL. That can largely be attributed simply to the fact that they have not yet lost a game, and in fact are now 8-0 on the year—matching their win total from 2019, with half a season left to play.

But the reality is that they have been playing in close games, or games that finish being close, nearly all season. The only significantly disproportionate result that they have had in 2020 to date was the 38-7 victory over the Cleveland Browns, and that feels like a distant memory.

I joke on Twitter just after the clock read 0:00 that this was the most stressful 3-0 stretch in NFL history, eking out narrow one-possession victories in each of the past three weeks, each of which came down to a final play—a missed field goal to send it into overtime, and makeable heaves into the end zone with time expiring.

Mike Tomlin knows that they can’t keep playing this way. “Obviously, we can’t keep having these conversations every week, because one of these weeks, we’ll be doing it with an L if we’re not careful”, he said in his opening remarks after the game, referring to the Steelers’ inability to put teams away.

The Steelers have won five games this season determined by a single possession, and of the three wins in which they scored by multiple possessions, the margin was within 10 points or fewer in two of them, the Browns game being the lone exception.

They have been keeping teams in the game consistently throughout the year, putting pressure on either side of the ball to close out games. Early in the year, it had been the offense being able to step up and finish things off. That has petered out in recent weeks, with the defense, and perhaps a bit of luck, being required to come out on top in the end.

In spite of that, however, the offense has also overcome two double-digit deficits at halftime with fourth-quarter comebacks and game-winning drives in that span, including a critical victory against the Baltimore Ravens on the road.

This one in Dallas, however, should have been a layup and it was anything but. Even with the opportunity to seal the game on 4th and 1, the offense busted, and gave Garrett Gilbert one more chance to throw for the end zone. It came up short, but it took the defense two drives of turning up the heat to ultimately slam the door in the final two-plus minutes.

This is a team that averaged 2.6 yards per carry, allowed 4.6 yards per carry, and did substantially worse on possession downs than their opponents. Were it not for a couple of Minkah Fitzpatrick turnovers, like with a plus-three turnover differential this week, Tomlin probably is talking about these issues with an L.

But they’re not, and that’s what matters most.