By now, I am sure we have all heard or read the statement from Sam Monson, who is the Pro Football Focus’ NFL podcast co-host, arguing that Ben Roethlisberger is ultimately holding back the Pittsburgh Steelers from truly being the best team in the league.

In his argument, Monson states that “… Roethlisberger is a marked degree below the best quarterbacks of all the other teams whether it’s Mahomes, even Lamar Jackson … [or] Brady.”

The Steelers are NOT the best team

Personally, I think arguing that Roethlisberger is holding the team back by comparing him to the play of Patrick Mahomes and Lamar Jackson is borderline disingenuous, at best.

Truth to be told: Roethlisberger is an aging quarterback who is over his prime years. There is no need to sugarcoat that. Nor does he possess the ability to escape the pocket and make things happen like Mahomes and Jackson.

But, the fact of the matter is this: he is getting the job done. And that is all that matters in the end, right?

In fact, Roethlisberger is currently in the middle of one of his best years ever based on advanced metrics. For example: 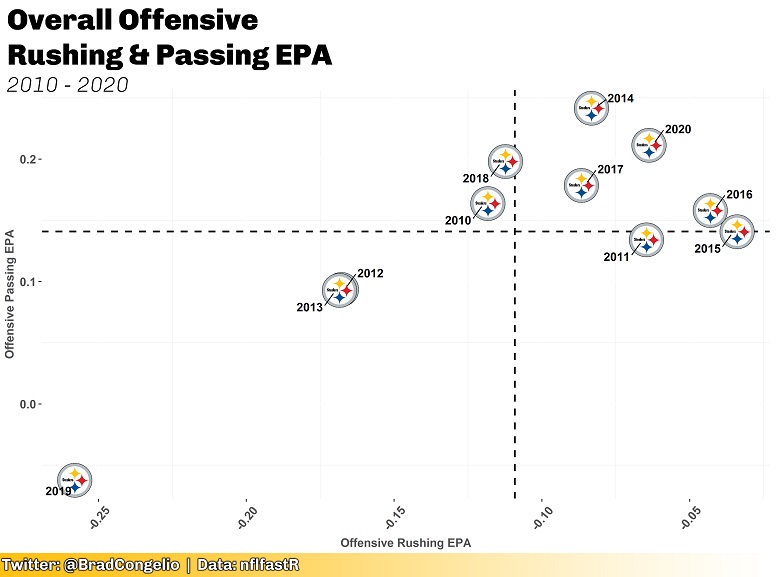 The above chart is showing overall offensive rushing and passing expected points added (EPA). This year’s 2020 squad is one of the best overall Steelers offenses in the last ten years. The rushing game isn’t quite as strong as 2015 or 2016.

But, halfway through the 2020 campaign, Roethlisberger is on track to have the second-best passing year of his career based on EPA alone.

Moreover, another very important takeaway is how putrid our offense was in 2019.

You know, 2019 … the year Roethlisberger did not play because of his elbow injury.

Here is another way of visualizing how terribly the offense performed without Roethlisberger under center: 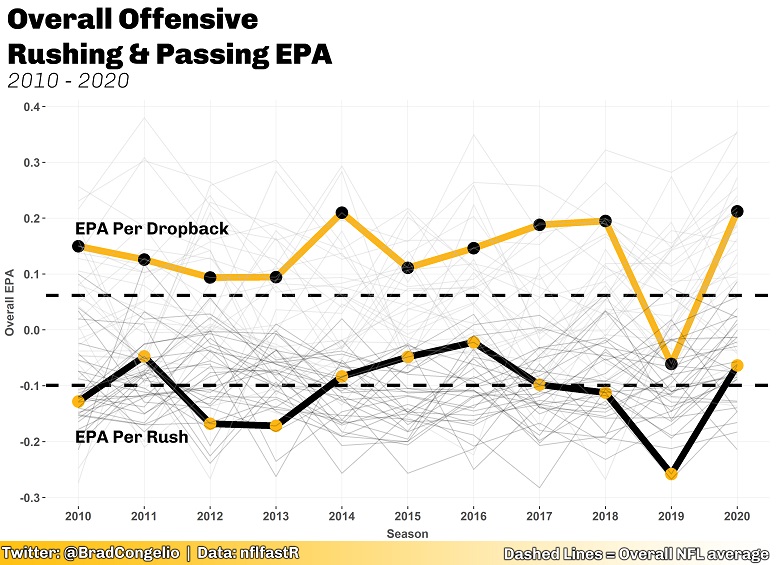 The dip in 2019 is just disastrous and highlights the importance of Roethlisberger to the offense. Without him under center, opposing defenses are able to focus on stopping the run knowing that Mason Rudolph – or whoever else winds up under center – is not going to be able to move the ball through the air likes Roethlisberger does.

Does Monson assume that Rudolph would have led the Steelers to the first 8-0 start in franchise history? Surely not.

Being considered the “best” or standing on top of power rankings is nice. But, we are also the only undefeated team in the NFL at the midway point of the season. We are, currently, guaranteed an ever-important first-round bye in the playoffs.

I will take that, with Roethlisberger’s current play, over being ostensibly considered the “best team in the league” any day.

So, if Roethlisberger is actually on a trajectory to keep pace with his career-best year of 2014 (best on advanced metrics, at least), how does he stack up specifically? 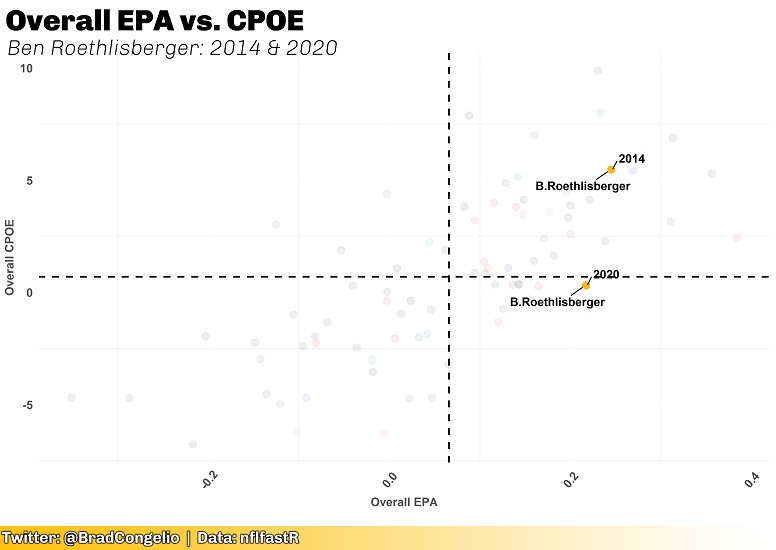 Not only can you inspect the relationship between this season and Roethlisberger’s 2014 campaign through EPA, but also through completion percentage over expectation (CPOE). In short, CPOE uses tracking data to estimate the probability that any single pass is completed at the precise time it is thrown. Afterward, all of those probabilities are averaged and then subtracted from the actual completion percentage of a player for each game.

Using CPOE allows for an examination of how a quarterback is performing in any given game or, in fact, on any given pass. In terms of advanced metrics, it is also one of the most strongly correlated ones when using publicly available play-by-play data (like the kind used in this article from nflfastR) with an r-squared value of 0.88.

Based on the above scatterplot of EPA vs. CPOE, Roethlisberger is just a hair removed from the “top performers” status this season. For fun, though, let’s see how Roethlisberger compares to quarterbacks league-wide using the same metrics: 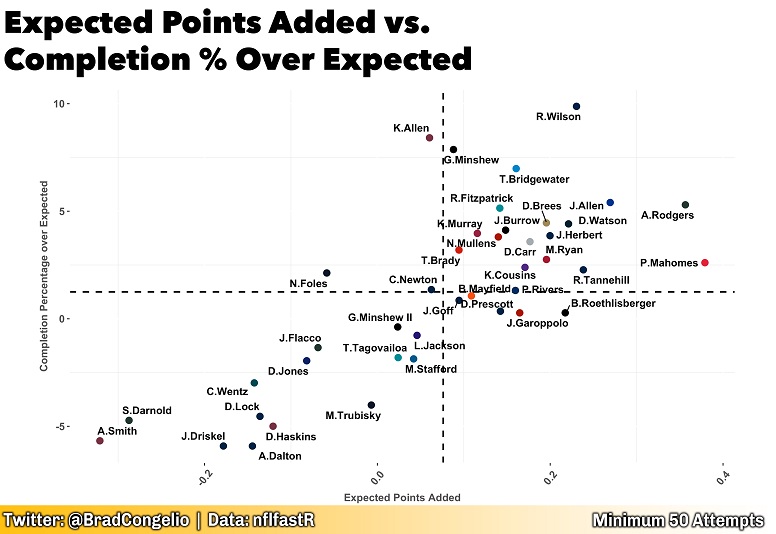 Again, Roethlisberger is just a hair outside what could be considered the “top performers” category in the top-right quadrant. As it is, he is largely keeping pace with his counterparts and is certainly in the thick of it.

It is difficult to reconcile what the advanced metrics show and an argument that Roethlisberger is “holding the team back” from being the best in the NFL. Why?

All that to say: Roethlisberger, I believe, still has enough gas in his tank to get this team deep into the playoffs.

Sometimes it isn’t pretty. Sometimes the offensive playcalling might hamper him. Nagging issues with injuries are increasingly worrisome. Yet, Roethlisberger is statistically on track to have one of the best seasons of his career.

And that certainly isn’t holding the team back.