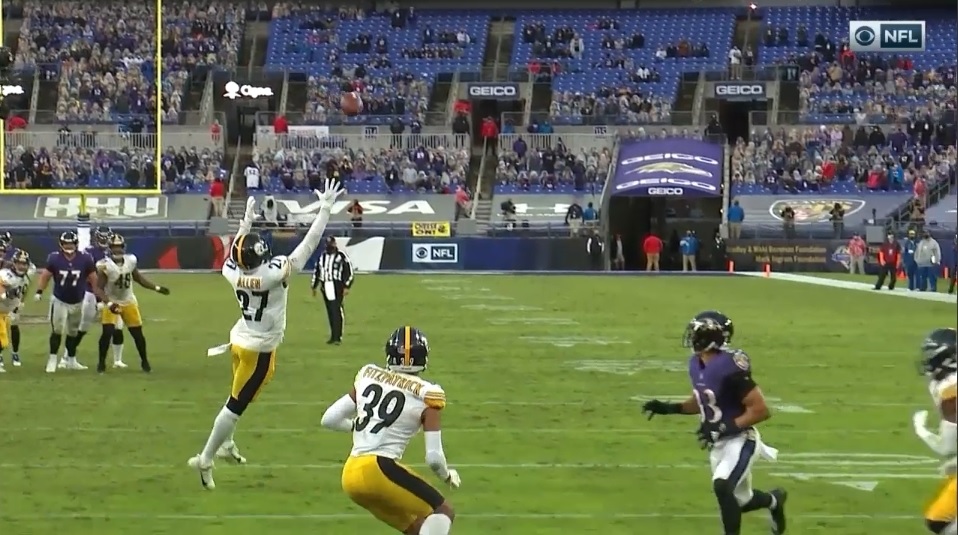 Don’t call him the dimebacker. Call him the dime linebacker. Small difference, I know, and regardless of how you want to designate him, Marcus Allen is the Steelers’ guy in dime packages. With Ulysees Gilbert III landing on IR with a back injury, Allen is next man up, Keith Butler confirmed talking to reporters Thursday.

“He will be for right now,” Butler told reporters according to a team transcript. “But 27 [Marcus Allen] has a good idea of what we want from him. I think he will be OK there for right now when we go into this game. Are we going to use somebody else at dime? No. We’re not.”

Against the Baltimore Ravens in Week 8, Allen played eleven snaps. All came in the Steelers’ dime package and six of them came on the Ravens’ final drive. With Devin Bush lost for the season and Gilbert III out of the lineup, the Steelers seem to prefer using dime less often, only employing it in the most obvious pass situations. Aside from that last Ravens’ drive, here are the down and distances Allen played.

“When we are playing what we call dime people. Dime people to us is six DBs and one linebacker. Then there is what we call a dime position. We don’t consider 27 in the dime people. We consider him a nickel, a nickel player, which means there’s two linebackers and five DBs in the game. So, we consider Marcus that when we have to use him sometimes. We use him sometimes when we are doing a little bit and trying to play dime personnel.”

Allen struggled to even stick on the roster in his first two years in the NFL. Prior to this season, he only saw significant snaps in two games; 2018 against the Chargers and last year versus the Ravens. Allen made the move to ILB this year but so far, has only played in obvious pass situations and on special teams. Last week, he served as the PP in place of Jordan Dangerfield, the QB of the punt team.

Butler praised Allen for what he did on the final play in Sunday’s win over the Ravens, forcing a tougher throw broken up by Minkah Fitzpatrick.

“If you notice in the latter part of that game, we got into the dime personnel and tried to get them out and Minkah [Fitzpatrick] makes that play down on the goal line. And Marcus made him put it up a little bit and gave us the time to react going behind him and Minkah makes a great play.”