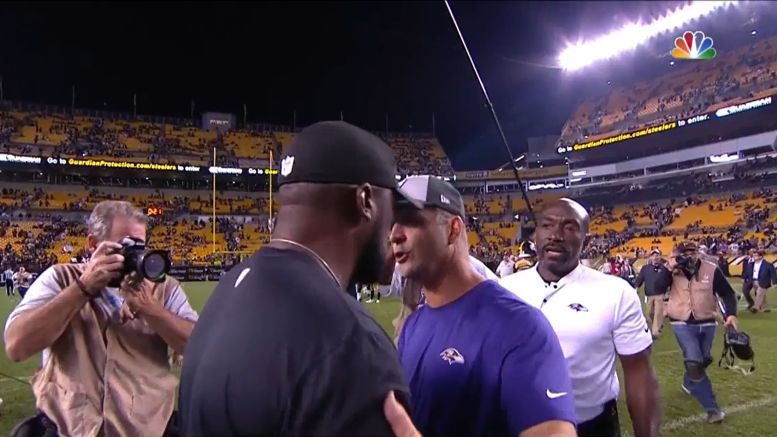 The Pittsburgh Steelers and the Cincinnati Bengals had a really contentious rivalry in the mid-2010s before the latter pretty much tanked right off a cliff to the point where they were in the position to draft Joe Burrow this year.

Headed by Vontaze Burfict, that was a rivalry that you don’t want—one that lacks respect. It also lacked competitiveness, since the Steelers always won. That is what has always been different about the much more long-standing rivalry Pittsburgh has shared with the Baltimore Ravens.

As they find themselves on the eve of a pivotal game that would see the winner told hold of the lead in the AFC North, Ravens head coach John Harbaugh offered some reflections on his years of battles with the Steelers and head coach Mike Tomlin.

“I don’t know if it needs to be described very much. We have great respect for them and their program. Coach Tomlin does a great job”, he told reporters during the week. “The coaching staff has been intact – pretty much – for the most part for many, many years. They have a very good understanding of who they want to be, how they want to play. Their style; they don’t vary from it very often at all. They stay true to themselves, and that’s what they’re all about. So, that’s a mark of a heck of a coach, and obviously Coach Tomlin is one of the best, and we have great respect for everything they do”.

While Harbaugh has a great deal of respect for the Ravens organization, he also admires how the Steelers have done business, not simply for decades, but for generations, and he shared some thoughts on the late Dan Rooney, as well, via Mike Prisuta.

“We respect the Steelers, the whole organization, top down. From the ownership, the Rooneys have always been tremendous”, he said. “I can remember Mr. Rooney, before he passed away, in our stadium or their stadium, would come down after the game, win or lose, whatever team won, and he would always shake my hand and just say ‘well-played game.’ Just the epitome of class”.

“Their organization reflects the family and the values of the region”, he went on. “General manager, head coach, coaching staff, scouts and the kind of players they bring in. All the things I think they embody shows up on the field and that’s something that we understand”.

That’s the sort of mutual respect that you generate from two similar organizations who just happen to repeatedly get in each other’s way. It’s good for the league, and good for the game. Now if only the Ohio teams could figure out how to run things—or perhaps not. I still like being able to get 3-4 victories out of them per season.