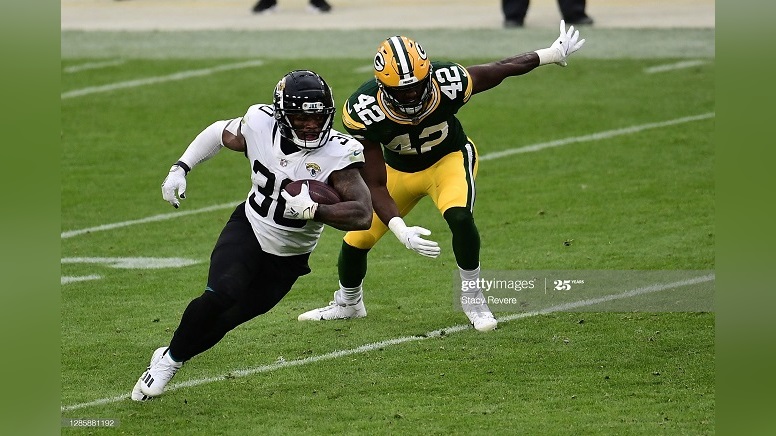 The 9-0 Pittsburgh Steelers aren’t running the football very well right now and that’s a bit of a surprise. Another NFL-related surprise is that the team they’ll play this coming Sunday, the 1-8 Jacksonville Jaguars, are running the football well so far this season and with an undrafted rookie running back at that. That Jaguars rookie running back, James Robinson, has definitely already caught the eye of Steelers head coach Mike Tomlin.

“One of the things that really captured my attention is this running back, James Robinson,” Tomlin said on Tuesday. “I cannot say enough about him and the respect that I have for what he’s done. I read something this morning where he has run for more yards than any undrafted rookie in the history of our game, through this point in his rookie season and that says it all. But beyond that fact, when you look at the tape, his style of play is impressive. He’s a deliberate one-cut guy. He’s downhill, he’s quick to holes, he’s got good vision. He finishes off runs extremely well with great pad level.

“Just stories like James Robinson, really, those of us that are football people, man, we just have a lot of appreciation for that. I mean, this is the Illinois State guy, undrafted, and is carving his niche out in this thing. And so, as much respect as we have for it, we acknowledge it as a big time challenge this week. I would imagine with a rookie quarterback as well; they’re going to continue to lean on him and his exploits and their exploits in that area.”

Robinson already has 917 scrimmage yards this season with 689 of them coming via his 155 total rushing attempts. He also already has 29 receptions on the season for 228 yards and his scored seven total touchdowns in the Jaguars first nine games of the season. He has five explosive plays of 20 yards or more already this season. 83 (53.6%) of his runs so far this season were successful ones.

As Tomlin referenced on Tuesday, Robinson enters Week 11 with the most scrimmage yards by an undrafted rookie through the first 10 weeks of a season in NFL history. That’s quite an accomplishment and it’s no wonder that Tomlin doesn’t seem to be taking the rookie lightly as the team prepares this week to play the Jaguars.

The Jaguars, as Tomlin also pointed out on Tuesday, will be starting rookie quarterback Jake Lutton once again this week and that’s yet another reason why Robinson is likely to get a lot of carries early and often against the Steelers on Sunday. The Steelers run defense hasn’t been great in the team’s last three games and especially against the Baltimore Ravens and Dallas Cowboys in Weeks 8 and 9. In those two games combined the Steelers gave up 308 yards on 58 total carries to opposing running backs.

“It starts there for us,” Tomlin said on Tuesday regarding Robinson and the Jaguars. “We cannot allow this guy to control the game in that way.”

Rookie @Robinson_jamess' combination of vision and power makes him difficult to bring down.