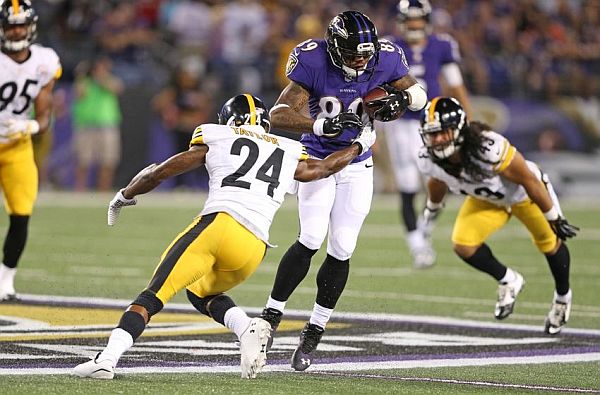 Ike Taylor, the Pittsburgh Steelers’ shutdown cornerback on multiple world title teams, may be one of the franchise’s more underrated players, if not of all time, then at least within their recent history. He was one of a handful of cornerbacks that any coach in the league would feel comfortable gluing to a team’s best wide receiver and just letting him follow the guy all over the field, all game, confident that he will be able to run with him for 60 minutes without much help.

Despite playing for 12 seasons and being on a highly-decorated and highly-successful squad, however, he never received a single post-season accolade in his career. Not even once did he manage to make a Pro Bowl, even as an alternate. How did this come to be?

“I couldn’t catch. I couldn’t catch a cold in Alaska”, he said during an interview on Wednesday during an appearance on the Pat McAfee Show. Repeating a fact that, of course, all dedicated Steelers fans already knew. Though he actually did walk it back.

“In practice, man, I caught everything”, he would add. “I can catch. I just didn’t lock in and focus the way I should’ve. But my son, he got that. He got them genes. My son can catch everything. I guess I had to eat it in my generation, in my professional career, because my son, he don’t drop nothing, so that’s good, I’m happy for that”.

Between 2003 and 2014, Taylor logged 140 starts over 174 games played. He finished with only 14 interceptions, managing a little over one per season. He had three in 2007, the highest total of his career, and he returned one of those for a touchdown. He had two interceptions in three other seasons, but he also had three years in which he had none.

He did finish his career with a robust 134 passes defensed as well, but one of his best qualities was the simple fact that he discouraged opposing quarterbacks from throwing in his direction. There was certainly a stretch of time during which he was one of the top coverage cornerbacks in the league when it came to allowing receptions and yardage and scores, even if he wasn’t getting the flashy statistics.

One thing he never dropped, as reflected in this interview, was his sense of humor, something that served him well over the course of his professional football career, and in his post-playing days as well. He was always a player who was easy to root for—except when dropping interceptions, of course, something he assures us his son will not do.